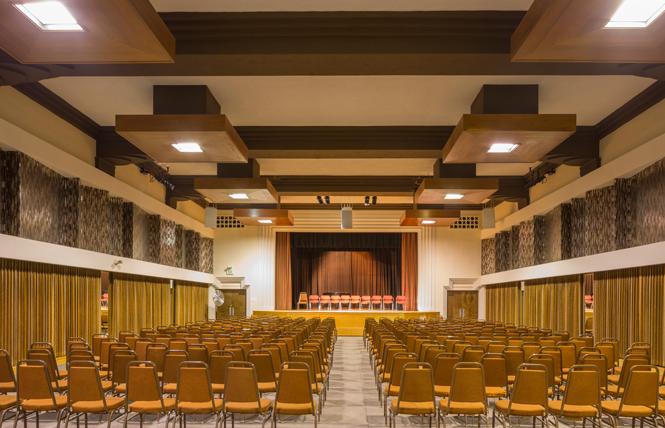 When the San Francisco Gay Men's Chorus fully opens its National LGBTQ Center for the Arts in about a year and a half, it's envisioned as a space for the entire community.

That was the message in an interview with the chorus' executive director, Chris Verdugo, a day after the choral group announced that it has purchased the four-story Art Deco building at 170 Valencia Street and plans to turn it into an LGBTQ arts center.

As the Bay Area Reporter noted in an online article last week, the center, when renovation is completed, will allow the chorus to have specific programs dedicated to performances and will mark the first permanent home for the singing group.

The building was purchased for $9.6 million, according to a January 17 news release from the chorus. Verdugo said the chorus currently rehearses there.

The LGBTQ arts center will fully open once renovations to the space are completed. The chorus will move its offices to the space in February, and then spend several months consulting with architects, designers, and audio-visual experts about what work is needed.

"We're looking for a soft opening in the fall, when we launch our master class series and lectures," Verdugo told the B.A.R.

The chorus will launch its 42nd season in September, and by that time, other organizations will be invited in, he said.

The building will house a cutting-edge media center, provide a creative space for LGBTQ artists, serve as a meeting location for community groups, and host trainings and internship programs, according to the release.

Chorus artistic director Tim Seelig said in the release that the arts center "will be open to all." Verdugo was asked about that since the chorus itself is made up of gay men.

"Absolutely," Verdugo, a gay man, said in response to a question about whether women, for example, would be able to participate in "sing-ins," which the chorus described as sessions where community members could sing with the choral group.

He also said that three women would soon be joining the chorus' board of directors.

"We want to bring in the entire community," Verdugo said. "A lesbian dance troupe, a trans theater group, whatever is out there. We are really going to be an arts center for the entire LGBTQ community."

"As the former director of a nonprofit arts and culture organization, I know how important it is that we offer inclusive, safe spaces for artists, performers, and collaborators to create works of art that empower our communities," Breed said in a statement provided by the chorus. "I know the San Francisco Gay Men's Chorus will continue to support and serve the members of our LGBTQ community here in San Francisco with this new LGBTQ center for the arts."

Funding
Verdugo said the chorus plans to soon announce a fundraising campaign to cover the cost of the purchase, renovations, and a supporting endowment fund for the center. Founding chorus member Terrence Chan has made a leadership gift of $5 million toward the cost of buying and renovating the space, the organization said. Additionally, the chorus' board has pledged an additional $1 million.

Verdugo stated, "We are so grateful to Terrence Chan and his life partner, Edward Sell, who will lead our campaign, and our board of directors for their most generous support of this remarkable venture. We look forward to working with, and alongside, other LGBTQ arts organizations while supporting them in their artistic and advocacy endeavors."

Board chair Keith Pepper pointed to the significance of the chorus having its own building.

"In its 40-year history, the chorus has performed at the world's most prestigious venues, but we have never had our own home," he said in the release. "This new space will allow the organization to expand its performing calendar to include master classes, an interview series with LGBTQ voices, and 'sing-ins' that welcome members of the community to perform with the chorus."