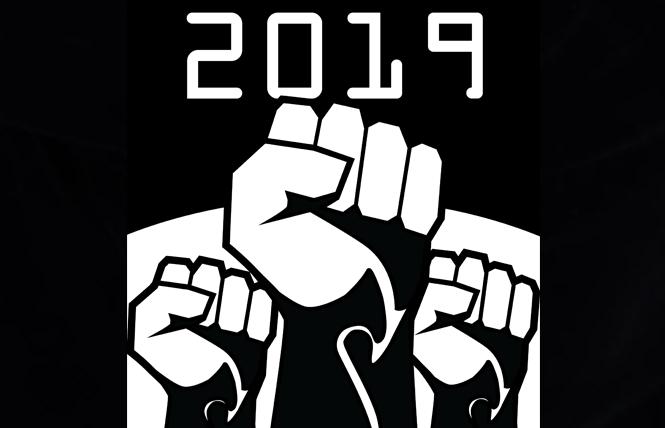 With it being a new year, I wanted to share a gentle suggestion or two. Maybe you can tack these on to the end of a list of your resolutions.

As you may be well aware, we are living in challenging times. I don't want to dwell on all of the shenanigans of President Donald Trump's administration, but we know that there are a lot of things stacked against the lesbian, gay, bisexual, and, especially, transgender portions of the larger community.

On top of that, there are particularly virulent transphobes currently clogging social media and other spaces backed by religious right organizations who cloak their hatred in the language of feminism with an all-but-stated goal of eliminating transgender people altogether.

We live in times where hatred against us is being amplified somewhere beyond 11 on a scale of 1 to 10.

Likewise, a lot of us fight every day over our own feelings of self-worth and self-hatred. That can be a hard, daily, and lifelong fight, and not all of us win that battle.

With all of this, we don't need to be attacking each other right now.

Nevertheless, in both the world of social media and within the non-virtual reality we all share, some of our LGB brethren are tearing down transgender people. I see the reverse, too, with some transgender people feeling the need to assert that they are not gay or lesbian by engaging in homophobia.

What's more, I will often see one "type" of transgender person tearing down another, claiming that their particular expression of their innate trans being is somehow less valid, less "real" than another. This is probably more often seen in fights between those who view people who want surgery as "more" of a trans person than those who don't.

So, with all the hate from outside our community, aimed squarely at all of us, the last thing we need right now is to fall into all-too-familiar patterns and begin attacking each other once again.

I'm not saying we all need to hold hands and sing campfire songs. To be honest, I don't think that's at all realistic.

We are always going to have disagreements. Heck, there are people who hold hatred in their hearts against me — and, to be honest, there are also some people I don't have many good things to say about.

I am saying that trans and nonbinary people, as a general rule, should to be able and willing to support each type of us there is: nonbinary and binary, transitioned, transitioning, or not, and cutting across lines of race, ability, culture, etc.

Likewise, all of us in the larger, sometimes fractious, LGBTQ acronym need to learn to allow space for each letter to thrive, together. We need to learn from each other to do so.

Support your trans siblings, your nonbinary friends, your LGBTQ comrades.

There is a lot we could learn from each other, both personally and politically. Not that there's a great deal of difference between those two in these grim days.

To me, as long as one's path harms no one, and is valuable to them, then it is a valid path. It may not be mine, of course, and that's perfectly fine.

We are always too willing to play "purity politics" games with each other and assume that if someone isn't walking the same path as you in our community, then we are suspect. Meanwhile, those who would seek to erase our very existence are not making such arbitrary distinctions: they want all of us gone.

I'd even suggest you take things a step or two farther, and this is where things get more challenging: For those of you who are some flavor of trans or nonbinary, understand that if someone is binary, or nonbinary, or has some track in their transition that may seem odd or even "wrong" to you, try to understand for yourself why that path is right for them.

Everyone has reasons for what they're doing, and the majority of those reasons are valid for a person given where they are in life and what they may happen to be facing. Some may feel a need to undergo surgical transition, while some may abhor the very idea. That choice is acceptable for each.

Further, what is a valid choice for a person today may not be tomorrow. Some people will find themselves needing to detransition due to societal or financial pressures, or any number of other reasons. They may retransition later. That's OK.

Lesbians, gay men, and bisexual people may feel that their issues are different from those of transgender people, but we actually have more similarities than differences. The issues of transphobic discrimination and homophobic discrimination go hand in hand, particularly given how much both aversions are based on expectations of gender.

I know it is seductive to turn to the same methods as those who seek to harm the LGBTQ community as a whole, and transgender people specifically. It would seem so easy to simply decide that you can find the parts of the community that you may be uncomfortable with, and excise the same. Then maybe, finally, our own oppressors would welcome us — but it never works like this.

Those who would stand against us would be more than happy to see us destroy ourselves first, leaving whatever remains powerless and disenfranchised before they enter to finish us off.

Now is not the time for our various community to break into factions, nor is this the time to plunge our own knives into each other's backs.

This is the time to stand together, as one, where we revel in our differences, and recognize that that is truly where our strength lies. All of our lives depend on it.

Gwen Smith will tolerate anything but intolerance. You'll find her at www.gwensmith.com.