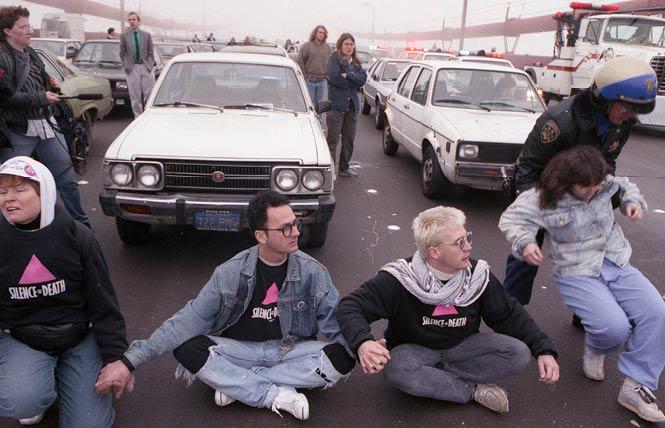 The Oakland Museum of California will present a major exhibition combining art and history to tell the untold and under-recognized stories of California's LGBTQ communities.

The exhibit is scheduled for April 13-August 11.

Going beyond mainstream narratives, "Queer California: Untold Stories" will be the first museum exhibition of its kind, according to a news release.

"At this very tumultuous time in our country, many marginalized communities feel that threats to their basic rights are on the rise," Christina Linden, exhibition curator, said in the release. "This exhibition is needed now more than ever not only to share messages of hope and change, but also provide a deeper understanding of the complex history and important lesser-known stories of LGBTQ communities in California."

The exhibit aligns important milestones in LGBTQ culture with untold stories, focusing on the diversity of queer identities, civil rights, and resistance to oppression. The exhibit will include a timeline that will help ground visitors in the key moments, movements, and figures in the state's LGBTQ history, as well as organizations, events, and people not often mentioned in that history.

Two profound objects will set the stage for the exhibit in a section titled "What Gets Left Out" — the original eight-color rainbow flag designed by Gilbert Baker in 1978 and contemporary artist Amanda Curreri's hand-dyed flag displaying the two colors removed from the original design. (The Bay Area Reporter reported in March that Lynn Segerblom co-created the original 1978 flag with Baker and the late James McNamara.)

According to museum spokeswoman Lindsay Wright, exhibit curator Christina Linden said the Baker flag is on loan from the GLBT Historical Society and is a version signed by Baker.

"It isn't the full-size one that flew on the flagpole" mentioned in the B.A.R. article, Wright wrote in an email, "and it is hard to say if it is from a batch that Lynn Segerblom may have collaborated on."

"The flag we are displaying is a prototype for the eight-color flag and our display will highlight what was left out when he modified the flag in order to make it commercially viable," Wright added. "The curatorial hopes to include more detail in the label text."

Several original works and commissioned pieces will be featured throughout the exhibition, including a new video featuring members of California native communities discussing stories of gender and identity in Native American culture.

Other highlights include "Places to Gather," which will highlight clubs and groups formed in the state, particularly in the 1950s and 1960s; "In the Body," which consists of materials and artwork related to self; and "Fluid/Fixture," which will include contemporary sculpture.

The museum said that historian and activist Susan Stryker, a transgender woman, and film historian Greg Youmans are consultants on the exhibition.

Those who are unhoused or in need can stop by for a full dinner and entertainment. For more information, visit https://www.tenderlointessie.com/.

Glide will hold its Christmas celebration starting with breakfast from 7:30 to 9:30 a.m., followed by a celebration worship service at 10, and the Christmas meal from 10 a.m. to 1:30 p.m. The Glide dining hall and church are located at 330 Ellis Street. For more information, visit http://www.glide.org.

The Old Oakland Holiday Ice Rink is located at the corner of Ninth and Washington streets, near the 12th Street BART station and numerous bus lines.

The rink will be open through January 6.

Covered CA deadline extended
Officials at Covered California, the state's health insurance marketplace under the Affordable Care Act, announced that it is extending the deadline to enroll for 2019 coverage after a federal judge in Texas ruled the ACA, or Obamacare, unconstitutional.

The new deadline is Friday, December 21, for health care coverage that begins January 1.

Consumers who enroll after December 21, and by January 15, will have their coverage start February 1.

"Open enrollment is full-steam ahead and continues in California and other states for several more weeks," Peter V. Lee, a gay man who is Covered California executive director, said in a news release. "No one in California should let this ruling discourage them from enrolling in health coverage or be worried about using the health plan they have."

Federal officials have indicated that the law will remain in place pending appeal of last week's decision. Already, state Attorney General Xavier Becerra said late Friday, after the Texas ruling, that California and a collation of other state attorneys general will continue the legal fight.

"Today's ruling is an assault on 133 million Americans with preexisting conditions, on the 20 million Americans who rely on the ACA for healthcare, and on America's faithful progress toward affordable health care for all Americans," Becerra said in a news release. "The ACA has already survived more than 70 unsuccessful repeal attempts and withstood scrutiny in the Supreme Court. Today's misguided ruling will not deter us: our coalition will continue to fight in court for the health and well-being of all Americans."

According to Covered California, consumer interest has surged in the past week, with approximately 15,000 people signing up for coverage.

Consumers can easily find out if they are eligible for financial help and see which plans are available in their area by entering their ZIP code, household income, and ages of those who need coverage into Covered California's "shop and compare tool" (https://apply.coveredca.com/lw-shopandcompare/).

Kick off new year with First Day Hike
California State Parks invites residents and visitors around the Golden State to usher in 2019 in a fun and healthy way with a First Day Hike on January 1.

More than 60 complimentary, guided hikes will be provided in 40-plus state parks around California (vehicle entrance fees might apply). The hikes are part of the First Day Hikes Program organized in all 50 states and Canada aimed at encouraging people to get outdoors.

"What better way to start out the new year than by connecting with family and friends in nature?" California State Parks Director Lisa Mangat said in a news release. "With iconic landscapes, beautiful views, and fresh air, hiking in our state parks is a perfect way to absorb the wonders of the outdoors and learn about California's natural and cultural resources."

Locally, Angel Island State Park (https://www.parks.ca.gov/?page_id=468) has natural beauty and incredible views of San Francisco and the Golden Gate Bridge, as well as a rich history that has been updated with more context from when it was an immigration station. Ano Nuevo State Park (https://www.parks.ca.gov/?page_id=523) continues its equal access walk to view elephant seals January 1 and throughout winter.

Updated, 12/17/18: This article was updated with comments from the museum.

Updated, 12/19/18: Updated to include that Glide is the name of the social services organization and the church.