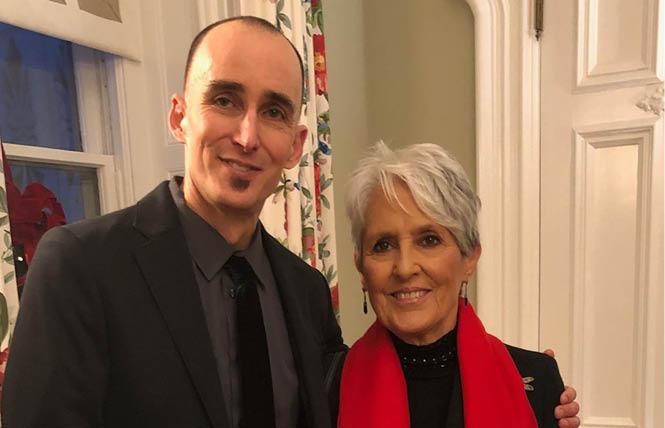 Daniel Zingale, shown here with Joan Baez at the Governor's Mansion December 4 as part of the California Hall of Fame festivities, will be a senior adviser for Governor-elect Gavin Newsom. Photo: Courtesy Facebook

He is currently serving as the spokesman for Newsom's gubernatorial transition and had been his campaign communications director this year. The hiring of the two was announced Thursday, December 13.

Zingale, 58, has decades of experience in public policy and the political realm, working for both Republican and Democratic governors. Since 2008 he has served as the senior vice president of the California Endowment, the state's largest private health foundation.

Prior to being hired by the endowment, Zingale served as chief of staff to former first lady Maria Shriver and senior adviser to former GOP governor Arnold Schwarzenegger. He also worked for former Democratic governor Gray Davis as his cabinet secretary.

"I'm honored to have an opportunity to be a part of a dynamic new administration led by a bold champion of justice for all," Zingale told the B.A.R.

In the 1990s Zingale was the political director of the national LGBT rights group the Human Rights Campaign and later served as executive director of the Washington, D.C.-based AIDS Action. After moving west, he was the founding director of the California Department of Managed Health Care.

In a column he wrote last month for the nonprofit news website CALmatters, — https://calmatters.org/articles/commentary/my-turn-a-very-open-letter-to-gov-elect-gavin-newsom/ — which covers state politics, Zingale spelled out a lengthy list of endeavors and initiatives he advised the incoming governor to pursue, one of which was to hire LGBT people in his administration.

"As you're filling vacancies at CalTrans, consider applicants who are trans, and for other top jobs too," wrote Zingale in the tongue-and-cheek commentary.

As for Click, he was the campaign communications director when former San Francisco district attorney and state attorney general Kamala Harris ran for U.S. Senate in 2016. He has also been a spokesman for U.S. Senator Mazie K. Hirono (D-Hawaii) and CARE CEO Michelle Nunn.

As the Bay Area Reporter previously reported, Newsom hired lesbian finance and policy expert Ana Matosantos, 43, as his cabinet secretary. She served as director of California's Department of Finance first for Schwarzenegger and then for Democratic Governor Jerry Brown between 2009 and 2013 when the state was buffeted by various financial crises.

And a trio of out leaders is among the "ambassadors" advising Newsom, a former San Francisco mayor who is currently the state's lieutenant governor, during his transition period. They are gay Long Beach Mayor Robert Garcia; lesbian former state Senator Christine Kehoe of San Diego; and Laphonza Butler, a lesbian who is stepping down as president of Service Employees International Union Local 2015 to join the Sacramento-based consulting firm SCRB Strategies as a partner. Its clients include not only Newsom and Harris but also Oakland Mayor Libby Schaaf.

In recent weeks Newsom has also named four straight women to high-level posts on his gubernatorial staff. Ann O'Leary, a staffer in the administration of former President Bill Clinton, will be his chief of staff.

Maricela Rodríguez, who has worked alongside Zingale at the endowment as its director of strategic communications and as a former staffer in Shriver's office, will be moving with him to the governor's office. She will serve as director of civic engagement and strategic partnerships.

Also working for Newsom as part of his communications team will be former campaign adviser Priscilla Cheng, a longtime labor leader who is taking on the role of director of external affairs.

Both Cheng and Rodríguez are the children of immigrants who resettled in California. Cheng's parents came from Hong Kong and moved to Los Angeles, while Rodríguez's parents are from Mexico and raised her in the Central Valley city of Woodlake.

Friday Newsom announced he had hired labor leader Angie Wei as hiss chief deputy cabinet secretary for policy development. Currently chief of staff of the California Labor Federation, Wei is also the child of immigrant parents; her family emigrated to the U.S. from China when she was one.

Jason Elliott, who worked for Newsom as a policy adviser when he was mayor and on his gubernatorial campaign this fall, is joining his Sacramento staff as the chief deputy cabinet secretary for executive branch operations. Elliott had served as the late mayor Ed Lee's chief of staff and then for his successors London Breed and Mark Farrell.

Newsom also reappointed John Masterson, 32, as a constituent affairs assistant, a position he has held since 2011 in Brown's administration. A fixture in the Capitol since being hired to work in the mailroom during the Schwarzenegger administration, Masterson has Down syndrome and is a longtime participant with Best Buddies International, the global organization for people with intellectual and developmental disabilities founded by Shriver's brother Anthony.

The salaries for the Newsom staffers have yet to be announced, and Click did not respond to the B.A.R.'s question on how much each will be earning.

Newsom, 51, will be sworn in as the Golden State's 40th governor Monday, January 7, in Sacramento. He is expected to take his oath of office on the West Steps of the State Capitol at 11 a.m.

The night prior he is hosting "California Rises: A Concert to Help the Victims of California Wildfire" at Sacramento's Golden 1 Center. The relief concert aims to raise money via the California Fire Foundation for the victims of the wildfires that have ravaged numerous cities across the state over the last two years.

And earlier in the day Sunday Newsom and incoming first partner Jennifer Siebel Newsom, the parents of four young children, will host a public event for families at the California State Railroad Museum in Sacramento.

Members of the public interested in participating in any of the inaugural events should email inauguration@gavinnewsom.com for further information.

The Political Notes column is going on a holiday hiatus. It will return Monday, January 7.