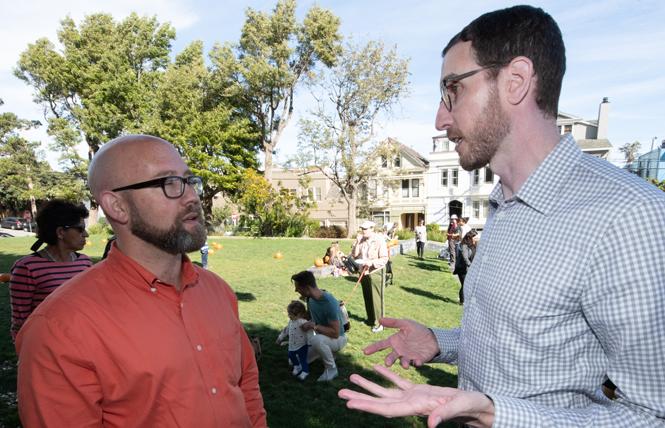 Over a year ago gay state Senator Scott Wiener (D-San Francisco) lashed out in a published post on the website Medium at then supervisorial candidate Rafael Mandelman for contending he would serve on the board in a similar fashion as Wiener had.

The rebuke from Wiener, who defeated Mandelman in 2010 for the District 8 seat on the Board of Supervisors, came after Mandelman repeatedly painted himself as similar in governing approach to Wiener during a debate with gay former District 8 Supervisor Jeff Sheehy.

The two gay leaders were competing to serve out the remainder of Wiener's board term. The late mayor Ed Lee had appointed Sheehy after Wiener resigned in 2016 to serve in the state Legislature.

As the Bay Area Reporter noted in its coverage of the November 13, 2017 candidate forum, Mandelman had repeatedly praised Wiener and applauded a number of policies and positions he championed at City Hall and in Sacramento. At one point, in talking about improving the city's public transit service, Mandelman said, "We need another Scott Wiener on the Board of Supervisors to work relentlessly for Muni."

His remarks not only elicited boos and groans from his supporters in the room that night but also the online critique from Wiener, who had endorsed Sheehy in the race.

"In fact, Rafael's politics and approach on key issues — housing and homelessness, in particular — are the opposite of mine," wrote Wiener, noting how Mandelman did not endorse his re-election to the board or his bid for state Senate. "Rafael has every right in the world to disagree with me on any given issue. He just shouldn't be implying that 'if you like Scott Wiener, vote for me.' That's not the case."

Mandelman went on to soundly defeat Sheehy in their June primary contest and ran basically unopposed for a full four-year term in November. And, since being sworn into office in July, he and Wiener have aligned on a number of issues.

One of the more high profile has been allowing city officials to use conservatorships to insist severely mentally ill homeless individuals enter into treatment. Mandelman, who secured guardianship over his late mother in order to get her the care she needed, traveled to Sacramento shortly after winning the June race to testify on behalf of Wiener's Senate Bill 1045, which Governor Jerry Brown signed into law.

It was the start of a political bromance between the more moderate Wiener and Mandelman, part of the progressive's current 6-5 majority on the board. In October, for example, Wiener plugged Mandelman as one of his "special guests" at his annual pumpkin-carving event in Noe Valley. And the two engaged in a friendly dance-off competition that month to raise money for the Castro Cares homeless outreach initiative in the city's gayborhood.

The one-time supervisorial rivals, who still have their policy differences at times, both told the B.A.R. that their noticeable chumminess of late shouldn't come as a surprise.

"Campaigns are campaigns," explained Wiener. "Rafael ran a fantastic race. He won and deserved to win. I have known Rafael 17 years now. Often we have not been on the same side but we have always liked and respected each other. Even in 2010 when we ran against each other, we never had a negative moment between us. There is a lot of mutual respect there."

As for how Mandelman is handling his new position, Wiener gave him an A-plus as a supervisor.

"I knew he would do a good job but he has exceeded my expectations," said Wiener.

Mandelman, who in 2012 won a seat on the city's community college board, insisted that he has "never tried to cast myself as a mini me of Scott."

While he felt that Wiener's Medium post had "overstated" their differences in terms of policy stances, Mandelman said he understood it was done during a contested campaign in which Wiener was backing another candidate.

"His blog certainly made an impression with my supporters. I noticed it. But since the election he has been nothing but gracious," said Mandelman.

The two will continue to have their differences, he said, but that shouldn't prevent them from teaming up to promote ideas and solutions that they both believe will benefit the city and its residents.

"We do not agree on everything," noted Mandelman. "But I have always respected his work ethic, his intelligence, and his tenacity. Those are the traits that I hope to share; he is an excellent public servant. But again, I don't agree with him on everything. I work with him on issues where we do agree, and there are a lot of those."

Mandelman's ability to reach across the city's political divide to work with Wiener is likely to be a key talking point by him and his supporters as for why he should be elected the next president of the Board of Supervisors at the January 8 meeting, when the winners of the November races are sworn in and the 11-member board elects a new leader.

In explaining why he feels he is qualified to be president, Mandelman pointed to his track record of bringing about unity as president of the community college board.

"I think the most important job of a leader of a board is to bring the members of that board together and help the members work together collegially," he said. "I have a demonstrated record of independence and willingness to challenge the mayor when necessary but also an ability to work with her to accomplish common goals."

District 9 Supervisor Hillary Ronen is also gunning for the powerful position, while District 7 Supervisor Norman Yee and District 10 Supervisor-elect Shamann Walton are also said to be interested in becoming president. The leadership fight has recently become a public brawl, with Ronen's supporters complaining that sexist attacks are being lodged against her to sink her being elected president.

She has lined up two supporters, both supervisors-elect, Matt Haney in District 6 and Gordon Mar in District 4. The other supervisors are so far publicly noncommittal.

"It is very uncertain right now where this is going," Mandelman said. "I want to have myself in the mix. I do think I have a lot to offer in that position."

Wiener told the B.A.R. he has spoken to a number of supervisors about the board president race. While he wouldn't endorse Mandelman, citing his desire not to meddle in the board's affairs, he did say he felt he was qualified for the position.

"You have to be fair" as board president, said Wiener, and "not use the position as a punishment and reward situation."

In a recent editorial board meeting with the B.A.R., Mayor London Breed also declined to say who she would want to see become president. A former board president herself, Breed maneuvered over the summer to ensure she passed the gavel on to her ally District 10 Supervisor Malia Cohen prior to progressives regaining control of the body due to Mandelman's election.

Breed did say that she would "prefer to work with a consensus builder" and noted that she and Mandelman "get along really well together."

The gavel was passed to Daniel Yost, who represents District 1 on the seven-member town council and had been serving as mayor pro tem this year. Yost, co-chair of the technology transactions practice at the Menlo Park office of law firm Orrick, where he has been a partner for years, was elected to his council seat in 2015.

"So this just happened. I am pleased to announce Woodside has a new mayor," wrote Yost in a Facebook post that included a photo of the gavel next to his council name placard.

Yost and his husband, Paul Brody, have two sons and moved in 2003 from San Francisco to the wealthy Peninsula enclave.

Web Extra: For more queer political news, be sure to check http://www.ebar.com Monday mornings for Political Notes, the notebook's online companion. This week's column reported on the swearing ins of newly elected LGBT leaders around the Bay Area.
Keep abreast of the latest LGBT political news by following the Political Notebook on Twitter @ http://twitter.com/politicalnotes .