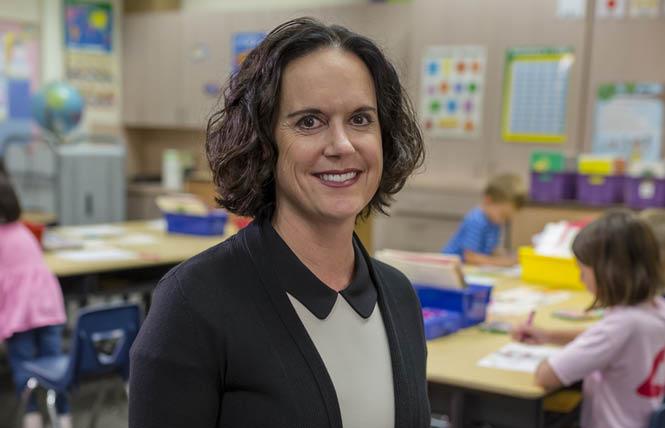 After weeks of ballot count updates, lesbian Assembly candidate Sunday Gover was unable to overtake Assemblyman Brian Maienschein (R-San Diego) in their contest for the 77th Assembly District seat. She lost by 607-votes.

Because he continued to hold on to his lead in the race as additional ballots were tabulated, Maienschein was sworn into office Monday afternoon (December 3) along with the other winners of the November 6 state legislative races.

Democrats had been holding out hope to see if Gover, a real estate agent, could pull off an upset victory and become the 61st Democratic member of the Assembly in the next legislative session.

Gover, who lives with her partner and their four children in Scripps Ranch, had seen her vote count steadily rise since election day. Her share of the vote went from 47 percent up to 49.83 percent at the beginning of December.

But Maienschein, a former San Diego city councilman, was able to fend off his challenger. He was first elected to the Assembly in 2012 and has been very supportive of LGBT legislation over the last six years. The statewide LGBT advocacy group Equality California had dual endorsed the two candidates in the race earlier this year.

But EQCA this fall rescinded its support of Maienschein for his voting against one of its bills this year. The bill, which Governor Jerry Brown signed into law, provides gender-affirming health care, including mental health care, to LGBT youth in foster care. Gay Assemblyman Todd Gloria (D-San Diego), who this month easily won his re-election bid for a second term, authored the legislation.

Gover's defeat means that none of the non-incumbent LGBT state legislative contenders were elected this year. Thus, the California Legislative LGBT Caucus will see its current membership of eight fall to seven in the next session.

Gay state Senator Ricardo Lara (D-Bell Gardens) will be leaving in January to become the state's insurance commissioner. Having won his contest this month, Lara is now the first LGBT person to be elected to statewide office in California.