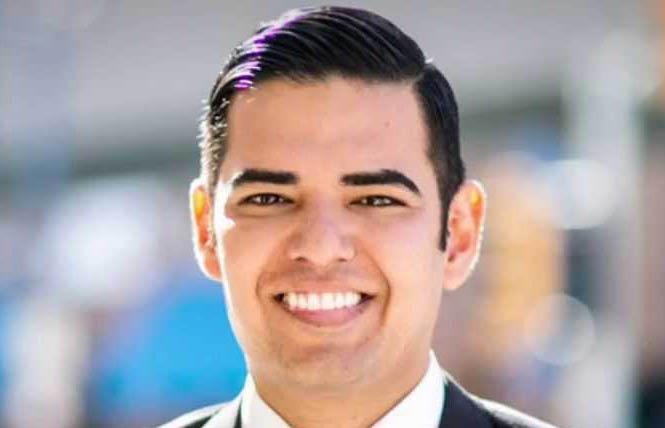 Newsom, a former San Francisco mayor who is currently the state's lieutenant governor, created an ambassador program so that "respected leaders" from across the state can pull together a list of ideas and strategies to address the various issues impacting the Golden State.

"These respected leaders will help me as I search for innovative ideas and talent across this state," stated Newsom in announcing the list of advisers last month. "I want every Californian to know that during this transition, I want to hear from you — no matter where you live, no matter who you are, no matter how you vote. This will be your administration."

Garcia, who turns 40 Sunday, was born in Lima, Peru and immigrated to the U.S. as a young child. His election in 2009 to a City Council seat in Long Beach marked a first for a Latino male and a queer person of color. His election as mayor five years later was a first for an LGBT candidate as well as a Latino. In April, he easily won a second four-year term as mayor and is often talked about as a candidate for higher office.

Kehoe, 68, was the first out LGBT person elected to the San Diego City Council, which she served on from 1993 to 2000. She was then elected to the state Assembly and later to the state Senate, leaving in December 2012 due to term limits. She now serves on the California Transportation Commission.

Outgoing Governor Jerry Brown in August appointed Butler, 39, who is African-American, to the University of California Board of Regents. The Los Angeles resident also serves as president of the SEIU California State Council and vice president of SEIU International. In honoring Butler in 2016, statewide LGBT advocacy group Equality California noted that Butler "is one of the most prominent out lesbians in American labor."

Nathan Click, a gay man who is the spokesman for Newsom's gubernatorial transition, told the Bay Area Reporter that the list of ambassadors is final as of now.

Having only three leaders from the LGBT community out of 25 may seem like quite a few, considering Newsom employed a large number of LGBT aides while mayor and made history for marrying same-sex couples against state law in 2004 just days into his first mayoral term. Yet EQCA spokesman Samuel Garrett-Pate noted the trio accounts for 12 percent of the membership of the advisory panel, which is the percentage of registered California voters who identify as LGBTQ per the group's polling.

"I think the 'All In California' Ambassadors reflect California's diversity well, and we look forward to continuing to work with them to ensure the LGBTQ community is well-represented within Governor-elect Newsom's administration," Garrett-Pate told the B.A.R.

Current Mayors London Breed of San Francisco, Libby Schaaf of Oakland, Darrell Steinberg of Sacramento, and Michael Tubbs of Stockton are advising Newsom on his transition, as is former Los Angeles mayor Antonio Villaraigosa. Republican Ashley Swearengin, a former mayor of Fresno who is now president and CEO of the Central Valley Community Foundation, is also among the ambassadors.

As the B.A.R. noted in a recent online story, Newsom is expected to name a number of LGBT people to his gubernatorial administration. He already has hired lesbian finance and policy expert Ana Matosantos, 43, as his cabinet secretary. She served as director of California's Department of Finance first for Republican Governor Arnold Schwarzenegger and then for Democratic Governor Jerry Brown between 2009 and 2013 when the state was buffeted by various financial crises.

In an effort to seek "a more inclusive, people-powered gubernatorial transition," Newsom launched a first-of-its kind website where Californians can rank their policy priorities and recommend specific policy solutions. They can also apply for official jobs in his administration via the website.

To do so, visit https://gavinnewsom.com/.