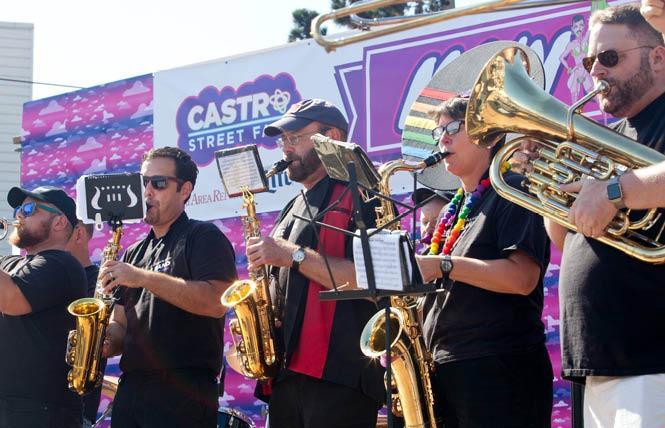 San Francisco is on the verge of designating the world's first LGBT musical group as the city's official band.

At its meeting Wednesday afternoon, the Board of Supervisors Rules Committee voted unanimously 3-0 to recommend that the full board next month affirm the special designation for the San Francisco Lesbian/Gay Freedom Band. The marching group is celebrating its 40th anniversary this year and for the last two decades has been calling itself the city's official band.

"On our baseball caps we wear sometimes it says on the back that we are the official band of San Francisco," said Doug Litwin, the band's board president who has played both clarinet and percussion in it since 1985, at the hearing while holding up one of the hats.

As the Bay Area Reporter first reported earlier this month, gay District 8 Supervisor Rafael Mandelman introduced an ordinance to make the designation official and legally binding. He told his board colleagues at the City Hall hearing that the band "has long been cherished by those inside this building. It has been operating in a sense as our city's unofficial official band."

Gay former supervisor Tom Ammiano was the first to honor the LGBT band with the title in two proclamations he authored, first in 1998 and again in 2003, on the occasion of the band's 20th and 25th anniversaries. Each noted that the ensemble was the first openly gay music group anywhere in the world.

"The proclamations cannot make the designation final. It must be done with us passing this ordinance," noted Mandelman, who sees it as a fitting gift to the band as it closes out its 40th year.

District 2 Supervisor Catherine Stefani made the motion to support the ordinance, noting that for years she was derided as a "band geek" by her classmates in school. She was a tenor saxophone player in a jazz band in junior high school.

"I am hoping people in junior high are watching," she said. "You do bring joy into so many hearts. I absolutely love music."

District 11 Supervisor Ahsha Safai, who chairs the committee, congratulated the LGBT band on its "phenomenal achievement." He said it is "wonderful we would" honor the group in such a way.

"I do know it has deep roots and a strong connection to the culture of this city," added Safai.

District 7 Supervisor Norman Yee disclosed that he had "never played a instrument in my life." Nonetheless, he noted, "I appreciate music. Your band deserves this title."

As much a part of San Francisco history — having performed at the inaugurations of mayors Art Agnos, Willie Brown and the late Ed Lee — the LGBT band has taken part in seminal moments in both U.S. and LGBT history. It marched in the 1979, 1987 and 1993 marches for LGBT rights in Washington, D.C. and performed at the inaugurations of Presidents Bill Clinton (on the sidelines) and Barack Obama (as an official parade contingent).

In 1982 it was one of the seven founding member bands of the Lesbian and Gay Band Association, which now numbers 37 musical groups from around the world. For years it has performed during the San Francisco Giant's LGBT game; this month it was invited for the first time to the Golden State Warriors' LGBT night.

"I am pretty sure we participate in more city activities and events than any other musical group, so I urge you to support this ordinance," said Linda Werner, a member of the band since 1979 who plays percussion.

The full Board of Supervisors is expected to approve the designation for the band at its meeting next Tuesday, December 4. It must vote on it a second time at its December 11 meeting before sending the ordinance to Mayor London Breed to sign.

Breed, who used to play the French horn as a child and has a standing invitation to rehearse with the LGBT band, supports making the LGBT band the city's official band.

In 1984 the city made "I Left My Heart in San Francisco" with music and lyrics by gay couple George Cory Douglass Cross its official ballad. Cross died of natural causes in 1975; Cory died by suicide in 1978.