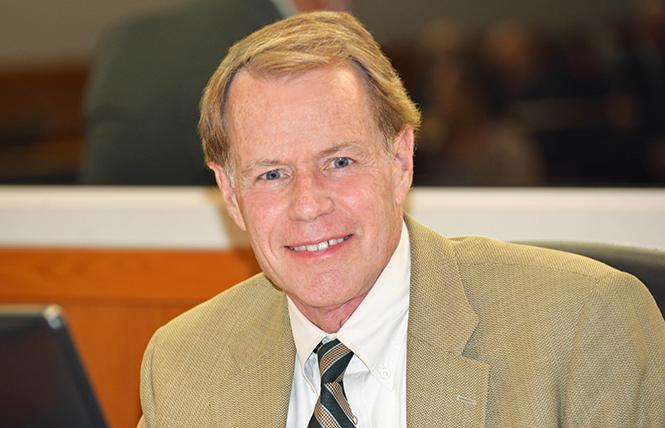 In other South Bay news, the San Jose City Council on Tuesday voted to approve a lease for the county to operate an LGBT-specific adult homeless shelter.

After two years in the making, the Gender Health Center will have a soft opening in December with limited services and be fully operational starting in January.

The clinic will offer hormone treatments, trans-affirmative gynecologic care, sexually transmitted disease testing and treatment, HIV testing, and PrEP and post-exposure prophylaxis prescriptions. The clinic is the result of conversations and action by the Santa Clara County Office of LGBTQ Affairs.

"There are several reasons why a clinic like this is so important," Maribel Martinez, a queer woman who is director of the Office of LGBTQ Affairs, told the Bay Area Reporter. "The county, in so many ways, is the local safety net, and we need to provide services in our community and ensure that these services are accessible, affordable, and inclusive to folks."

After a countywide LGBTQ Health Assessment in 2013, initiated by gay Supervisor Ken Yeager, exposed a significant need for transgender care in the county, conversations surrounding the creation of the clinic began, with formal talks starting in 2017. The survey revealed that many trans individuals have to travel to San Francisco, Oakland, Santa Cruz, or Fremont to receive trans-specific medical care.

After the Gender Health Center's opening this week, it will offer pediatric primary care and psychology services every second and fourth Wednesday afternoon of the month and adult primary care services every Thursday morning. A social worker will be available to patients Monday-Friday from 8 a.m. to 5 p.m. An important aspect, Martinez emphasized, is that patients do not need a referral to get an appointment at the center, eliminating another barrier to health care that many trans individuals face.

Once fully up and running in January, the clinic will expand medical services. A fully operational staff will include a medical provider, nurse practitioner, psychologist, psychiatrist, and health education specialist. A medical director has not yet been chosen, but an announcement is expected early next year.

One Santa Clara County trans resident is particularly excited about the clinic's opening. Lance Moore, 58, is the creator of the South Bay Trans Day of Visibility, now in its 10th year. Once the clinic opens, Moore, a bisexual trans man, can refer participants of a social group for trans men he started at the Billy DeFrank LGBT Community Center in San Jose to the clinic.

"For a long time there were very little health services for trans people," he said. "There was no access to education for people to even ask about how transitioning works."

He continued, "It's going to be a wonderful thing. I won't have to send people to Santa Cruz anymore. It's really important to make trans services more accessible to the South Bay."

David Campos, a gay man who's a deputy county executive, said that trans people are among the most disadvantaged of the LGBT community and said the opening of the clinic is a matter of "equity and fairness," as trans people face barriers to medically necessary services that others do not.

"Our goal with the medical center is not just to make it a center of excellence for the trans community in the Bay Area, but in the world," Campos said.

To do that, Campos explained that the entire staff at Santa Clara Valley Medical Center will undergo cultural competence training, which he said is underway. Another aspect included in his goal is "to start exploring what else is out there," in terms of medical innovation and other trans services.

Earlier this year, the Santa Clara County Board of Supervisors approved nearly $2.3 million for the creation of the shelter, which hopes to open next month on a limited basis. A downtown San Jose building has been chosen. It is expected to serve up to 20 people.

As previously reported by the B.A.R., the proposed LGBT adult shelter would be only the second of its kind in the United States. San Francisco established Jazzie's Place, a shelter for LGBTQ adults, in 2015, which Campos took the lead on. Los Angeles and New York have established homeless shelters with specialized services specifically for LGBT youth.

The opening of the center and the shelter are coming at a very important time, Yeager told the B.A.R.

"Few local governments have had the will or ability to make these sorts of investments. In a time when federal government is working to erase trans people from existence, this clinic is another way we are telling our transgender and gender-nonconforming residents that they are seen and valued," Yeager said in an email response to the B.A.R.

Appointments for primary care and medical social work at the Gender Health Center can be made by calling the Downtown Clinic Call Center at (408) 977-4411. The center's insurance eligibility is the same as at other Santa Clara Valley Medical Center clinics.