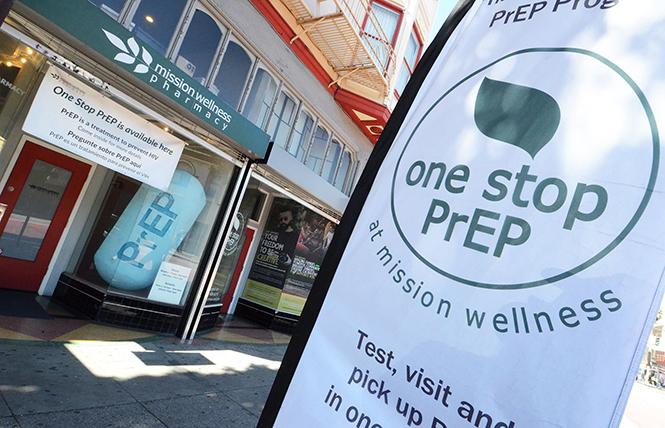 A research project shows PrEP use has risen nearly 30 percent based on state level data. While California was not in the top five jurisdictions, research has shown that San Francisco's gay community has widely adopted it. Photo: Rick Gerharter

The number of people taking PrEP rose by nearly 30 percent from 2016 to 2017, but disparities remain, according to updated figures released this week by AIDSVu. Numbers will likely increase further following a recent U.S. Preventive Services Task Force recommendation that people at high risk for HIV infection should be offered PrEP.

"It is our hope that the newly available 2017 data on AIDSVu will allow health departments, policy makers, researchers, and community leaders to better understand and visualize trends in PrEP use, monitor progress, and address disparities in their communities so they can develop programs and policies to increase PrEP awareness and access where it is needed most," said AIDSVu principal scientist Patrick Sullivan of Emory University's Rollins School of Public Health.

In March, Emory and Gilead Sciences launched a project to make the latest PrEP numbers available via AIDSVu, an interactive online map of the U.S. HIV/AIDS epidemic. The project collects data from more than 100,000 pharmacies, hospitals, outpatient facilities, and physician practices across the country.

At that time, Sullivan's team reported that PrEP use had increased from 8,768 prescriptions in 2012 — when the federal Food and Drug Administration approved Truvada (tenofovir/emtricitabine) for HIV prevention — to 77,120 in 2016. The new numbers, released during a webinar November 27, indicate that approximately 172,479 people were using PrEP in 2017. This estimate is not precise and the actual number could range from around 100,000 to 200,000.

This represents an average annual increase of 56 percent over the five-year period, including a 29 percent jump during the last year alone, Sullivan told webinar participants.

But these figures reflect a conservative, or minimum, estimate, as not all sources of PrEP are included (for example, health systems like Kaiser Permanente with proprietary pharmacies). Many experts think the real number is substantially higher.

Disparities persist
The latest data show ongoing disparities in PrEP use, with some of the populations at highest risk for HIV infection lagging behind.

Women were early adopters of PrEP — in part to enable safe conception for mixed-status couples — accounting for about half of users in 2012. But while the number of women using PrEP has remained stable, the number of men has increased dramatically. Women account for 19 percent of new HIV diagnoses, but made up just 6 percent of PrEP users in 2017.

Likewise, records often do not include information on race and ethnicity. However, available data suggest that African-Americans are underrepresented among PrEP users. Although they make up about 12 percent of the U.S. population and account for 44 percent of new HIV diagnoses, black people are thought to make up only about 10 percent of PrEP users. Sullivan said researchers are working to address this data gap and plan to release figures on PrEP use by race and ethnicity in 2019.

PrEP use is about twice as common in the Northeast compared with other regions of the United States, Sullivan reported. Although the South accounted for more than half of all new HIV diagnoses, it was home to just 30 percent of PrEP users in 2017.

The top five states or jurisdictions with the highest rates of PrEP use were Washington, D.C., New York, Massachusetts, Rhode Island, and Washington state. Although the gay community in San Francisco widely adopted PrEP early on, this was not enough to put California in the top tier. Next year AIDSVu plans to release more granular data on PrEP use by county.

"It's worth noting that four of the top five all have campaigns to end AIDS or Getting to Zero efforts," Sullivan said. "We see the greatest rates of PrEP use in cities that are participating in organized efforts to end AIDS."

Although the Centers for Disease Control and Prevention already recommends PrEP for those at substantial risk, USPSTF guidelines are important because private insurers, Medicare, and state Medicaid programs are legally required to pay for screening and prevention services with an "A" or "B" grade. An "A" rating indicates a high degree of certainty that the benefit is substantial.

"The evidence is clear: when taken as prescribed, PrEP is highly effective at preventing HIV," USPSTF member Dr. Seth Landefeld of the University of Alabama at Birmingham said in a statement announcing the guidelines. "To make a difference in the lives of people at high risk for HIV, clinicians need to identify patients who would benefit and offer them PrEP."

The PrEP recommendation says clinicians should offer PrEP to people who are at high risk of HIV acquisition. This is also a grade "A" recommendation.

The sole recommended PrEP regimen is once-daily Truvada. Although studies have shown that tenofovir alone, or Truvada taken "on demand" before and after sex, also prevent HIV infection, only daily Truvada is FDA-approved for this purpose.

Clinical trials of men who have sex with men have shown that Truvada reduces the risk of HIV infection by around 90 percent if used consistently. In real-world studies and demonstration projects, no one who took PrEP at least four times a week became infected. PrEP also offers a high degree of protection for women, although they may require stricter adherence. There is less evidence regarding people who inject drugs.

Both draft recommendations are open for public comment until December 26.

The PrEP recommendation "holds the potential to facilitate access to a proven and valuable intervention for people who are exposed to higher risks of HIV infection," the HIV Medicine Association said in a statement. "The USPSTF recommendation could significantly raise the percentage accessing it now, to many more, particularly those with health insurance coverage."

The AIDS Institute issued a stronger statement: "Once finalized, there should be no excuse for clinicians not to recommend PrEP to people who are at risk of HIV. Additionally, thanks to the Affordable Care Act, private insurers must cover PrEP without cost-sharing."