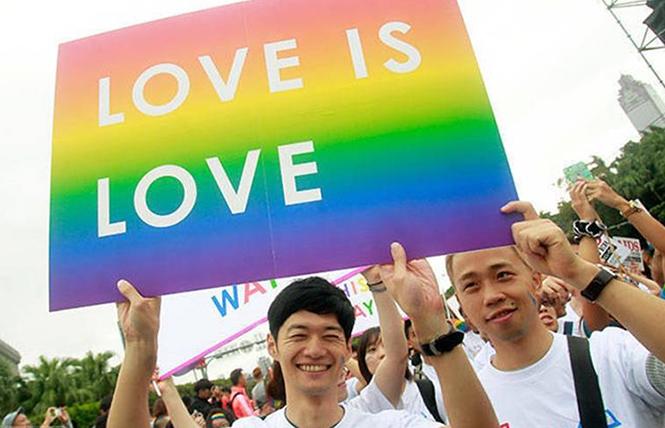 Half of the 10 questions on the ballot related to LGBT issues: same-sex marriage and education about the LGBT community in schools.

LGBTs lost by wide margins on all the questions.

"This result is a bitter blow and a step backwards for human rights in Taiwan," said Annie Huang, acting director of Amnesty International Taiwan, in a statement following the election.

Jennifer Lu, a spokeswoman for Marriage Equality Coalition Taiwan, blamed the "incompetence" of Taiwan's government that allowed for what she called "absurd referendums" to go forward, she told Al Jazeera.

"Tonight, we send our support to advocates and families in Taiwan who are hurting after a disappointing election result," he said in a statement from the organization.

"The public have used their ballots to tell the governing authorities what is the mainstream opinion," Tseng Hsien-yin, leader of the Coalition for the Happiness of our Next Generation, which opposed same-sex marriage, told the South China Morning Post.

The election results not only dampened LGBT Taiwanese pride, they also created a legal mess for lawmakers. The conflicting referendums go against a court order that legalizes same-sex marriage by May.

However, the court didn't specify how same-sex marriage should be implemented, leaving it vulnerable to conservative groups to challenge it with separate regulations.

Even before the election, legal experts disagreed over President Tsai Ing-wen's administration's power to enact the referendums into law.

Marriage equality advocates are concerned about the potential to water down the court's order and other possible attempts to stall same-sex marriage.

The government's administrative cabinet recently reiterated its position that same-sex marriage will go ahead regardless of the referendum, said Victoria Hsu, who was the lead lawyer in the marriage equality case that led to the 2017 ruling.

A Ministry of Justice spokesperson told the Washington Post that if local marriage licensing offices deny same-sex couples to register to marry they will be in violation of the law by May 2019.

Vivian Chen, 34, and Corrine Chiang, 36, were hopeful after the court's ruling last year. They were looking forward to same-sex marriage being legalized so they could marry and share custody of their 3-year-old daughter, Zoe, they told the Guardian.

"The ruling of the grand justices was such a progressive decision and that was a big joy for us," said Chen, a civil servant living in Taoyuan who is Zoe's biological parent.

The anti-same-sex marriage referendum campaign filled them with anxiety and fear.

"But I did not expect the anti-gay opposition to propose a referendum, or for the proposal to be passed because it is unconstitutional," Chen said.

Huang called upon the Taiwanese government to work for equality.

"The result must not be used as an excuse to further undermine the rights of LGBTI people," said Huang. "The Taiwanese government needs to step up and take all necessary measures to deliver equality and dignity for all, regardless of who people love."

LGBT advocates noted anti-gay opponents' tactics taking advantage of a legal loophole and said they were backed by a sizable war chest.

CNN reported the Alliance for the Happiness of the Next Generation, the leading anti-marriage equality organization, had more than $3.24 million to spend on advertising during the campaign.

Marriage equality opponents were able to launch a disinformation and smear campaign scaring voters by describing LGBT people as perverted and the reason for the spread of HIV/AIDS, said the heads of Taiwan Alliance to Promote Civil Partnership Rights and Gender Equity Education Coalition, and American-based Freedom to Marry.

The LGBT referendum campaigns also got caught up in Taiwan's struggle to separate itself from China and the country's economic issues.

The tensions between the autonomous island, which China claims is its territory, appeared on the ballot as a question about recognition at sporting events.

In a narrow vote, Taiwanese voters rejected being identified as "Taiwan" at the 2020 Summer Olympics in Tokyo and other sporting events.

This summer, Taiwanese LGBT athletes protested not being able to represent themselves as Taiwan at Gay Games X in Paris. The sporting event's organizers bowed to China's demands to officially recognize Taiwan as the "Taipei" team in July ahead of the August games.

The bottom line was that the election was a litmus test for the ruling pro-independence Democratic Progressive Party and Tsai ahead of the country's 2020 elections.

The liberal party took a brutal hit after voters didn't see results of campaign promises, including amending and implementation of laws to include same-sex marriage in line with the court's order.

Tsai campaigned in support of LGBT rights before she won the election in 2016.

"Today, democracy taught us a lesson. We must study and accept the higher expectations of the people," Tsai said following the election results, reported ABC News.

Tsai stepped down as head of the DPP following the election.

She remains Taiwan's president, but her future bid for re-election remains in doubt.

Politicians are highly aware of the risks complying with the court order and the power of the conservative minority as eyes turn to the election in two years.

However, Miao Poya, who initiated a campaign for the marriage equality referendum, recognized supporters' failures.

"Our referendums failed not because only a few people support marriage equality, but because we had not been good enough at canvassing support in the way the Coalition for Happiness were," Poya told the Post.

Taiwan has been lauded as a liberal pro-LGBT island and a beacon of inspiration in a sea of red in conservative Asia.

"Taiwan has been generating a lot of excitement in the region for LGBT activists, including ones in mainland China and Hong Kong, where the possibility of it being legalized will generate pressure for other governments in the region to follow," Maya Wang, senior researcher at Human Rights Watch, told CNN.

Wolfson said that the "divisiveness and fear generated by opponents in Taiwan" that led to the disappointing vote "will quickly fade."

"People will embrace respect for same-sex couples, affirm their love and commitment, and move again to support the freedom to marry," he said in the release, noting that 1.1 billion people live in countries that have legalized same-sex marriage around the world.

"The people of Taiwan deserve no less," he continued. "Because every day of denial is a day of real injury, indignity, and injustice, it is time to fulfill the command of the constitution and end exclusion from marriage without further delay."

Got international LGBT news tips? Call or send them to Heather Cassell at Skype: heather.cassell or oitwnews@gmail.com