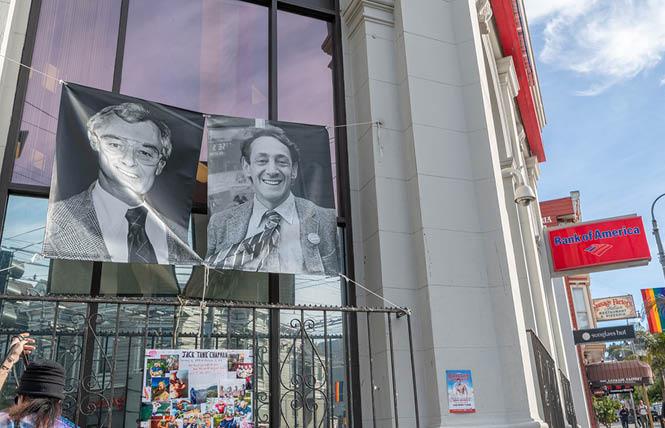 The devastating news of the murders of the city's mayor and first openly gay supervisor left Shireen McSpadden and her fellow students at Lowell High School with a feeling of dread. It was a shattering blow for the then 14-year-old freshman.

"For me, and for people my age, it was an end of innocence in a sense," recalled McSpadden. "We were all blown away."

McSpadden and her friends joined hundreds of other residents of San Francisco the evening of November 27, 1978 in front of City Hall to mourn George Moscone, whose election three years prior as mayor swept in a progressive changing of the guard in the city's politics, and Harvey Milk, who made political history in November 1977 by becoming the first out politician of a major American city, and the first in California, after winning a seat on the Board of Supervisors.

"We all knew how bad that was and how scary it was, and then to know we are not safe," recalled McSpadden, who is bisexual and now the executive director of the city's Department of Aging and Adult Services.

While she attended the candlelight vigil to mourn the passing of the progressive leaders, McSpadden told the Bay Area Reporter in a recent interview that, at the time, she was too young to fully understand the gravity of the event. But the assassinations, committed by disgruntled former supervisor Dan White, combined with cult leader Jim Jones' mass murder days earlier of his followers, who had relocated from San Francisco to a jungle compound in Guyana, had a noticeable impact on the city.

"It was just a really tough year to be in San Francisco," she recalled.

Tom Nolan, who would break through his own rainbow political ceiling in 1985 by being the first out LGBT person elected to the San Mateo County Board of Supervisors, agreed that the events of 1978 left a long pall over San Francisco.

"In 1976, I was living here in the city, and it felt exuberant being gay and out. My partner and I then moved to Washington, D.C. When we then moved back to San Francisco in 1979, it felt different," said Nolan, who is the manager of special projects at the city's aging department.

The legacies of Milk and Moscone continue to reverberate today, with Milk now an international icon for the fight for LGBT rights. Increasingly, it is not just LGBT people citing Milk as an inspirational figure but also straight political leaders. South Carolina Democratic congressional candidate Sean Carrigan, who lost his bid to unseat Republican Joe Wilson, cited Milk in a campaign email sent last month ahead of marching in his state's largest Pride event: Famously Hot SC Pride in Columbia.

Of Milk, Carrigan wrote, "His words resound to this day, 'It takes no compromising to give people their rights. It takes no money to respect the individual. It takes no survey to remove repressions' ... In a day and age where the controlling party is attempting to roll back human rights for LGBTQ Americans, it is important that we have elected officials who will not compromise on their safety and liberty."

(Though Carrigan made a common mistake by referring to Milk in his email as "the first openly gay elected official." That honor goes to Elaine Noble, who was elected in 1974 to the Massachusetts House of Representatives.) 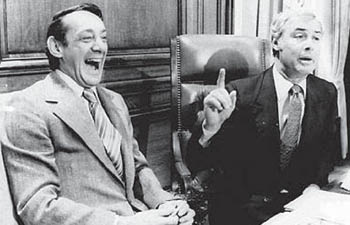 A photographer from the Associated Press in 1977 captured this iconic image of Supervisor Harvey Milk, left, and Mayor George Moscone inside San Francisco City Hall. Photo: Courtesy of Holt-Atherton Special Collections, University of the Pacific Library

The double tragedies that rocked the city four decades ago are being commemorated in various ways this month. Tuesday, November 27, at 7 p.m. the Harvey Milk LGBTQ Democratic Club will host the annual vigil and candlelight march in honor of Milk and Moscone. This year, following remarks by those who knew Milk at Harvey Milk Plaza in the city's gay Castro district, at the intersection of Castro and Market streets, attendees will walk to City Hall following the same route mourners took back in 1978. There, former state Assembly speaker and mayor Willie Brown is expected to reflect on Moscone, while union leaders and LGBT political and community leaders will discuss the impact both men had.

"In November of 1978, bookending the Thanksgiving holiday, the city of San Francisco, and it might be said, the world was changed forever," noted Stephen Torres, a Milk club board member who is helping to coordinate this year's event. "The double horror of the tragedy at Jonestown, followed by the slaying of Harvey Milk and George Moscone was a crushing trauma to the heart and soul of San Francisco, and yet in that darkness we rose together in candlelight not only to remember those we had lost but to strengthen and galvanize ourselves to give them voice and continue their fight and vision for the future."

The club has partnered this year with a number of other groups to host several events marking the solemn anniversaries. It installed a banner commemorating those lost in the dual tragedies on the facade of the building that now houses SoulCycle above the Castro Muni station.

The California Historical Society and the South San Francisco Public Library provided the photos of Peoples Temple members and the late Congressman Leo Ryan, who was shot and killed along with four others by members of Jones' Peoples Temple while they were trying to flee Guyana.

Prior to this year's vigil the Nasser Family and management of the Castro Theatre are presenting a free showing of the Oscar-winning documentary "The Times of Harvey Milk" at 5 p.m. Tuesday.

Wednesday, November 28, from 7 to 9 p.m. the GLBT Historical Society's monthly "Fighting Back" series will focus on Milk's living legacy. The talk takes place at the archival group's GLBT History Museum at 4127 18th Street in the Castro.

"His story, if framed correctly, has the power to reach so many," said Torres, 40, who is gay and relocated to San Francisco from Los Angeles nearly 20 years ago.

A bartender at the gay Twin Peaks bar in the Castro, Torres often talks with one of his regular customers who worked on Milk's unsuccessful 1976 campaign for a state Assembly seat against Art Agnos.

"You can see how deeply emotional it still is for everyone that was there," said Torres. "This was a working, breathing middle class city that, like, where everyone's lives were intertwined. It was very difficult, I would imagine, for anyone to live through that and not be affected by it in some way, shape, or form."

A documentary about Moscone's life will air this week on San Francisco's public television station and is now available to be viewed online.

As the B.A.R. reported last month, in an article for LGBT History Month, Moscone's family in 2014 donated his papers to his alma mater the University of the Pacific. He had graduated with a B.A. in sociology from the university in Stockton, California, in 1953 when it was known as the College of the Pacific.

Among the roughly 160,000 documents that make up the George Moscone Collection housed at the University of the Pacific Library's Holt-Atherton Special Collections is a trove of letters, news releases, photos, and newspaper clippings that demonstrate the former mayor's close ties to, and strong support of, the LGBT community. From appointing the first LGBT people to serve on key city commissions, including Milk, to signing a groundbreaking city law ending LGBT discrimination in both the public and private sectors, Moscone left a lasting legacy of his own in advancing LGBT rights.

The archive includes 60 oral histories that filmmakers hired by the university incorporated into a documentary about Moscone, produced by University of the Pacific Professor of Communication Teresa Bergman with research and production assistance by Pacific undergraduate and graduate students. Nat Katzman directed the film, "Moscone: A Legacy of Change," which is narrated by actor Peter Coyote.

It will have its Bay Area television debut on KQED at 8 p.m. Friday, November 23. The station will reshow the film at 2 a.m. Saturday, November 24, and will also air it on the KQED PLUS channel at 3 p.m. Wednesday, November 28.