Jock Talk: Giving thanks in our sporting lives 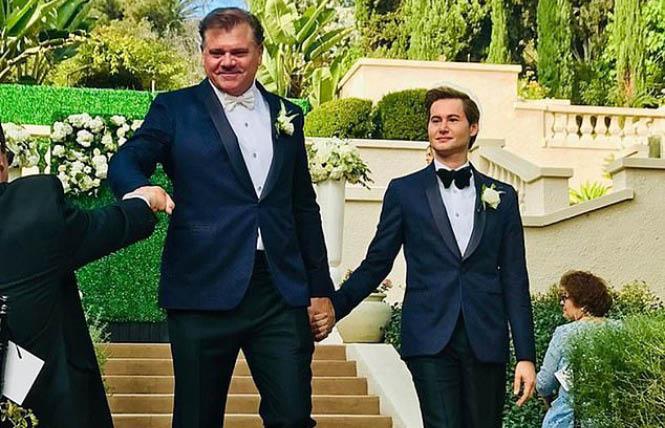 Thanksgiving Day is a bit more somber this year for many of us. We have spent the past week-plus choking and squinting in relentless smoke from a relentless wildfire that devastated a huge chunk of our beautiful state, destroyed homes and businesses, killed too many loved ones, and left thousands homeless. Now, as the rains are anticipated with much needed relief, we await inevitable evangelical proclamations that the state's horrific fires are caused by the gays.

So as we sit down to dig into turkey, tofu, and seasonal overindulgence, let's take time to give thanks for some of the more ancillary blessings we have enjoyed the past year.

Such as this breathless sentence that graced the www.Out.com website last week: "Former Dallas Cowboys linebacker, Jeff Rohrer, has not only come out as gay, he plans to marry his partner of two years, Joshua Ross, this Sunday, November 18."

Let that one sink in for a moment, non-millennials.

Rohrer, 59, was drafted by the Dallas Cowboys in the second round in 1982 and played until 1987. Back then, David Kopay was the only NFL player, retired or active, who had come out; and legal same-sex marriages in the United States would just be struggling into reality 20 years later.

Rohrer, who was married and divorced previously and has two children, told the New York Times he began his escape from the closet when he met Ross, a skin-care specialist, at a bar in West Hollywood in 2015.

Rohrer and Ross, 36, were married Sunday at Wattles Mansion Gardens in Los Angeles.

"If I had told the Dallas Cowboys in the 1980s that I was gay," Rohrer told the Times, "I would have been cut immediately. It was a different world back then. People didn't want to hear that. I've given at least five people heart attacks with this news. But for the most part, many of my closest friends, including some of my former teammates with the Cowboys, could not have been more happy and supportive."

Thanks as well to gay former rugby star Gareth Thomas for using a recent homophobic attack against him as an opportunity to heal rather than double down on retaliation.

Police confirmed that Thomas, 44, was assaulted in Cardiff, Wales the night of Saturday, November 17, by a 16-year-old assailant. Thomas, who in 2009 became the first pro rugby player to come out as gay, posted a video about the attack on Twitter and available on YouTube.

Police apprehended the suspect quickly, Thomas asked authorities to allow the boy to apologize rather than go through prosecution for a hate crime.

"I was the victim in my home city of a hate crime for my sexuality," Thomas said on the video, in which he appeared with a badly banged up face. "There's a lot of people out there who want to hurt us, but unfortunately for them, there's a lot more that want to help us heal."

More details of the attack were not immediately available.

Thanks also to the folks who continue to speak out against homophobia in their sport.

"To us Gareth is a hero, one of the few brave enough in men's rugby to stand up and be open about who he is," said Ben Owen, chair of International Gay Rugby. "Hate crimes have no place in 21st century Britain and have no place in our sport, on or off the pitch. International Gay Rugby will continue to work at a grassroots level, with national unions and with World Rugby to make sure rugby remains a sport for all — a sport that says no to the intolerance and bigotry that was seen in Cardiff on Saturday night."

Another blessing we can all enjoy is the absolute silence, after more than a decade of self-serving lies and puffery, from the late and hardly lamented World Outgames. Two years ago I reported the initial signs that the wheels were falling off the cart for the 2017 Miami Outgames and a year ago I was still mopping up the financial fiasco the event proved to be. Yes, it would have been satisfying to see justice done in the courts and liars made to pay for lies but, under the circumstances, I'll be happy just to know they've stopped bilking the LGBT sports community.

Let us also give thanks to the six international activists — Marta Márquez of Spain, Eric Houter of the Netherlands, Eloi Pierozan Junior of Brazil, Guillermo León of Mexico, Vanesa Paola Ferrario of Argentina, and Mateo Fernández Gómez of Colombia — who paraded through the streets of Russia during the 2018 men's World Cup soccer tournament in national team jerseys that combined to replicate the rainbow flag. Russia may silence LGBT voices at major international sports events it hosts — but it can't make us invisible.

"We have taken advantage of the fact the country is hosting the World Cup at the same time as Pride Month, to denounce their behavior and take the rainbow flag to the streets of Russia," the activists said on their website, http://www.thehiddenflag.org. "Yes, in the plain light of day, in front of the Russian authorities, Russian society and the whole world, we wave the flag with pride."

And thanks to the hundreds and hundreds of female gymnasts who stood up in a Michigan courtroom to testify day after day after day about the ongoing sexual abuse engaged in by Larry Nassar, former team doctor and trainer with USA Gymnastics and Michigan State University. History may eventually record their testimony as the turning point in the battle to end the abuse-enabling culture in elite American sports programs and to make those programs more supportive and safer for young athletes.

And now, my personal thanks to the young man in Utah who signed up to be an organ donor and the medical team that inserted a new-to-me kidney into my body this year, ending my eight-year flirtation with death on dialysis. This will be the first Thanksgiving in years that I will have a real appetite come turkey time and I intend to make the most of it.