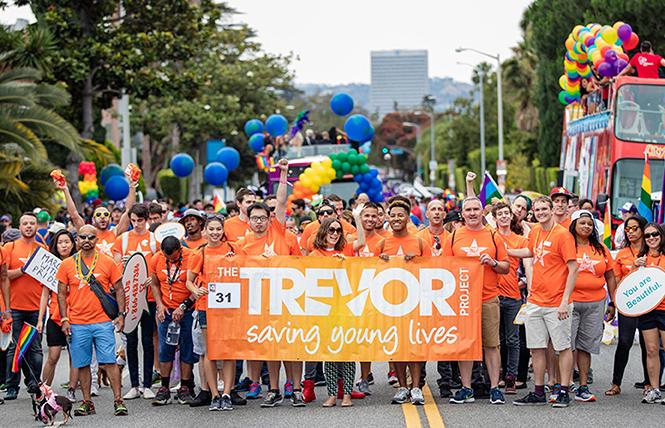 The Trevor Project, supporters of which are shown at a Pride parade, released a report Monday showing that many California schools have LGBTQ-inclusive suicide prevention policies. Photo: Courtesy the Trevor Project

A report released Monday shows that many schools serving grades 7-12 in California have suicide prevention policies that address the needs of LGBTQ youth, following a new state law that went into effect in 2017.

The West Hollywood-based Trevor Project released its report, "Protecting LGBTQ Youth Through Inclusive School Suicide Prevention Policies in California," November 19. The report focuses on Assembly Bill 2246, which passed in 2016 and requires schools serving grades 7-12 to adopt a policy on student suicide prevention that specifically addresses the needs of high-risk groups, including LGBTQs.

The nonprofit, national organization that works to end LGBTQ youth suicide conducted a study of 406 schools serving grades 7-12 in the Golden State that have suicide prevention policies in place.

"This is why legislation is so important," Sam Brinton, head of advocacy and government affairs for the Trevor Project, said in an interview with the Bay Area Reporter. "The legislation is calling out a community that needs to be served. LGBTQ youth will now be able to study in a school where they are represented in policies that protect them."

The report reveals that suicide prevention policies enacted prior to AB 2246 were significantly less likely to contain postvention procedures, address the needs of all high-risk students, and almost never included LGBTQ youth.

Postvention refers to activities that reduce risk and promote healing after a suicide death.

A positive outcome of the new law, as stated in the study, was that nearly 90 percent, or 343, of those schools' suicide prevention policies implemented after AB 2246 met the requirements of addressing all three elements of prevention, intervention, and postvention.

"Students in California are now better served because there are policies that will intervene and prevent suicide and address what happens when a student comes back from a suicide attempt," Brinton said.

'"If a policy duplicated the language of any of the above policies, it was deemed in full compliance with AB 2246," the report states.

A total of 386 policies were available for review, the report states, representing 95 percent of known current suicide prevention policies in the state.

Many of the schools' plans follow the state Department of Education's model policy, which is designed to serve as a guide for local educational agencies. The model policy specifically addresses the needs of high-risk groups, includes consideration of suicide awareness and prevention training for teachers, and ensures that a school employee acts only within the authorization and scope of the employee's credential or license.

There is a lot of work still to be done, Brinton added, but he is pleased with the high numbers of implementation so far, given that AB 2246 does not include enforcement language.

"As someone who studies this, I am really proud of California," Brinton said. "These are really big numbers for no mandate being in place. A lot of schools stepped up to the plate."

The purpose of the report was to the help the state's mission to evaluate which schools are actually following the law, Brinton said. The report states that the organization will continue to work with the state Assembly and California Department of Education to encourage schools to comply with the law.

For more information on the Trevor Project, visit www.thetrevorproject.org. Its 24/7 Lifeline for young people in crisis is 1-866-488-7386.