Newsom says it will be hard to top pro-LGBT Gov. Brown 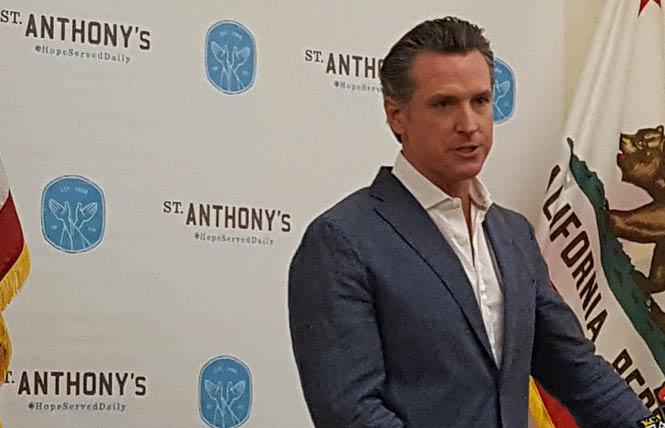 Gavin Newsom, in his triple roles Thursday as lieutenant governor, acting governor, and governor-elect, spoke at a wide-ranging news conference in San Francisco and said it would be difficult to surpass Governor Jerry Brown's record on LGBT rights.

"It's going to be hard," Newsom said in response to a question from the Bay Area Reporter about whether he could top Brown as the state's most LGBT-friendly governor.

As previously reported, this year Brown cemented his legacy as the most pro-LGBT governor in the country's history when he signed 12 bills that directly benefit the LGBT community. During his current two terms in office, Brown has signed into law at least 72 bills that specifically protected the rights of, or improved the health of, the LGBT community in the Golden State. And over the last seven years, Brown has vetoed just eight LGBT-related bills.

"The bar can always be raised," Newsom added, saying that while the state has legal protections for LGBTs, they alone don't "necessarily solve problems."

"We have not necessarily ended bigotry and homophobia and hate crimes," Newsom said.

Newsom was serving as acting governor because Brown was out of state Thursday. His first act was to order flags flown at half-staff due to the mass shooting at a bar in Thousands Oaks (Ventura County) Wednesday night. Twelve people and the shooter died. One of those killed was a Ventura County sheriff's sergeant.

Referring to the recent mass shooting at a Jewish synagogue in Pittsburgh, Pennsylvania, Newsom added that violence continues to occur against Jewish people, as well as LGBTs.

"The assault on the trans community is disgraceful and needs to be called out," the governor-elect said. "We need to do more and we need to do better."

He was critical of the Trump administration's relentless attacks on the transgender community, specifically ending recognition of them under federal law.

As the B.A.R. has reported, in July 2017, President Donald Trump announced his plans to ban transgender people from the military. Last October, then-Attorney General Jeff Sessions issued a memo to declare that federal law prohibiting discrimination based on sex in employment does not prohibit "discrimination based on gender identity, per se." Last December, reports emerged that the Trump administration banned budget documents from the Centers for Disease Control and Prevention from using the word "transgender." At HHS, the administration removed from at least two federal health surveys questions that would identify data specific to LGBT people. It also announced it would no longer interpret the Affordable Care Act to prohibit discrimination based on gender identity.

Most recently, it was reported the Trump administration is preparing a proposal to limit the identification of a person's gender to include only "male" or "female" that is listed at birth.

Newsom said that three nights before the November 6 election, he met a family whose son is trans.

"They said 'he's looking up to you,'" Newsom recalled.

Newsom was asked about the current state Supreme Court vacancy and said that would be up to Brown, in his role as governor, to nominate someone "unless he wants to leave it to me, which I'm happy to consider."

"We only have one governor at a time," he added.

Newsom praised House Minority Leader Nancy Pelosi (D-San Francisco), who is poised to again become speaker of the House after the Democrats took back control in Tuesday's midterm election.

"Nancy Pelosi will be back to her rightful position soon and we'll have a champion at the federal level," he said.

He made another reference to Pelosi when he was asked about his decision in 2004 to order San Francisco officials to issue marriage licenses to same-sex couples just 36 days into his first term as mayor. He repeated what he's said previously, that it was a sudden decision and not planned.

"I accepted an invitation from Nancy Pelosi to watch the Bush State of the Union speech. It literally transpired," he said, referring to then-President George W. Bush, who at the time was pushing a federal marriage amendment. "It was not part of a 100-day plan."

"Who knows?" he said about any ambitious plans during the first months of his gubernatorial administration. Referring to his campaign theme "Courage for a Change," the governor-elect said he knows "folks are reading into that."

"I lean into things," Newsom said. "Governor Brown does too."