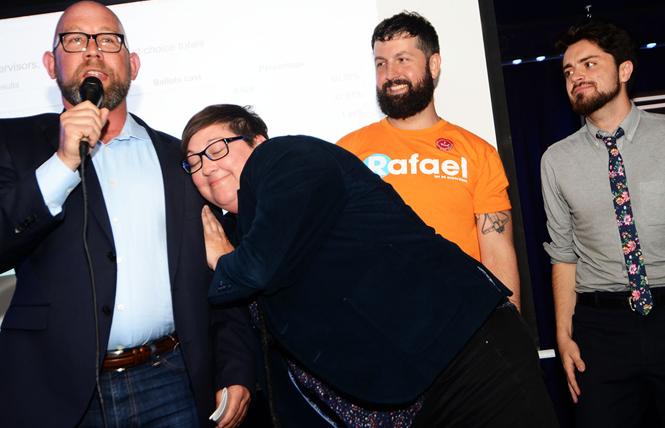 District 8 Supervisor Rafael Mandelman, left, shown here at his election party in June, has not ruled out seeking the board presidency now that progressives will continue their majority. Photo: Rick Gerharter

Progressives are set to maintain control of the San Francisco Board of Supervisors, as the unofficial returns Wednesday morning had all of the left-of-center candidates defeating their more moderate opponents for the governing body's even-numbered seats.

Meanwhile, the city's Assessor-Recorder Carmen Chu easily beat back her opponent, Paul Bellar, to win another term, as did unopposed Public Defender Jeff Adachi. Chu claimed victory with 76 percent of the vote.

With current board President District 10 Supervisor Malia Cohen termed off the board, and having won her race Tuesday for a state Board of Equalization seat, the contest to see who she hands the gavel to has already begun. While District 9 Supervisor Hillary Ronen has been mentioned as the likely next board president, gay District 8 Supervisor Rafael Mandelman would not rule out seeking the position himself when asked about the leadership race on Election Night by the Bay Area Reporter. Both are part of the current board's 6-5 progressive majority.

"No one has asked me for my vote," said Mandelman. "We will see what the outcome of tonight is and then have conversations with my colleagues."

Mandelman had decidedly won the District 8 seat in the special election June 5 to serve out the remainder of gay former supervisor Scott Wiener's term through the end of the year. Wiener had resigned in late 2016 after being elected to the state Senate, leading the late mayor Ed Lee to appoint gay AIDS activist Jeff Sheehy as the first known HIV-positive person to serve on the board.

After being ousted from office this summer, Sheehy abandoned his plans to run again in the November race, paving the way for Mandelman's easy victory Tuesday night. Other than a few fundraising events tied to his 45th birthday in mid-October, Mandelman barely mounted any campaign and eschewed hosting his own party Tuesday night. He will remain the lone LGBT supervisor on the board, as no LGBT candidates ran for the other seats up for grabs Tuesday.

Stefani, who has a lesbian sister, won with 53 percent of the vote after three rounds under the city's ranked-choice voting system. She ended the recent trend of appointed supervisors going on to lose their bids to hold on to their seats, which happened to three of the four supervisors appointed by Lee.

Josefowitz fell short with close to 47 percent of the vote. Republican businessman John Dennis garnered less than 10 percent of the vote, while Schulyer Hudak, a documentarian who has worked for several Democratic officials, received nearly 14 percent.

"We did it! I am honored that the voters put their confidence in me to be their neighborhood voice at City Hall and that I will continue to serve as your District 2 Supervisor," wrote Stefani in an email to supporters Wednesday afternoon.

All three of the other supervisorial contests were for open seats, either due to the incumbents being termed out of office or opting not to seek re-election.

Christened "Viktoria Landslide" during a drag makeover Saturday night by B.A.R. nightlife columnist Juanita MORE!, school board member Matt Haney proved the moniker true with his commanding victory in the race for the District 6 supervisor race to represent the Tenderloin and South of Market. 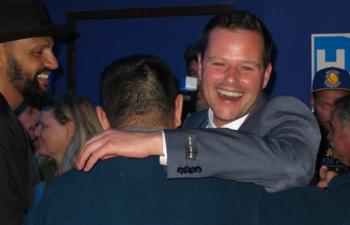 "I think we won tonight," Haney told supporters at his Election Night party.

He pledged to be "a voice" at City Hall for residents of the Tenderloin, where he lives, in particular who are struggling with homelessness, drug addiction, or simply trying to make ends meet.

"A lot of people look at the Tenderloin and say, 'Why are we falling so far behind? Why are we not developing for everyone? Why is there such a lack of affordable housing? Why are we talking about District 6 for some people but not for others?' What we said was we are excited about the future of San Francisco, but the future has to include all of us," said Haney.

Kris Calvin, Haney's mother, told the B.A.R. that "what Matt brings that's different is that he doesn't really say 'I'll fix it,' but instead will go out and contact all the groups affected and see what they think they need."

In the race to succeed District 4 Supervisor Katy Tang, who opted not to seek another term representing the Sunset, Gordon Mar won with 56 percent of the vote after seven rounds of ranked-choice voting. Tang's legislative aide, Jessica Ho, who had the endorsement of her boss, came in second with 43 percent after the six other candidates in the race were eliminated.

The race for Cohen's District 10 supervisor seat representing the Bayview and Hunters Point went to school board member Shamann Walton, executive director of nonprofit Young Community Developers. He netted nearly 63 percent of the vote after six rounds of ranked-choice voting. Tony Kelly, a Potrero Hill resident who had run before, came in second with 37 percent.

Human Rights Commissioner Theodore Ellington, the Golden State Warriors' former director of public affairs, was in third with 23 percent of the vote. Like Walton, Ellington is African-American and his voters' second choice votes for Walton gave him the edge over Kelly to win the seat.

At Haney's party Tuesday night gay former supervisor David Campos, who now chairs the San Francisco Democratic Party, heralded the progressive sweep of the board races. The local party had endorsed all of the winning supervisor candidates.

"Ever since the progressives took over the San Francisco Democratic Party, we've endorsed progressive candidates," said Campos. "We have a new wave of progressive leadership in San Francisco, which is not afraid to go against corporate money."

Yet several of Tuesday's winners — Mandelman, Stefani, and Walton — hew to more of the middle in terms of the city's political divide, as does appointed District 5 Supervisor Vallie Brown. So, despite the progressives having the votes to elect the next board president, the incoming board is likely to work with moderate Mayor London Breed on various issues.

"I think the progressives versus moderate talking point is going to be a little muddy," said Mandelman.