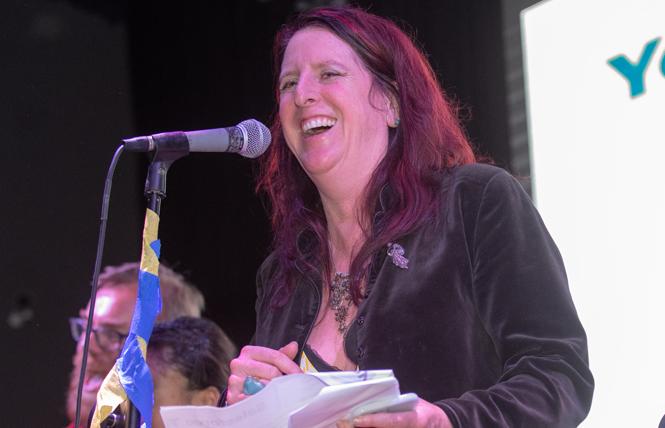 There may only have been a few to vote on, but the San Francisco ballot measures decided Tuesday could have a significant and lasting impact on the city. So far, votes favor the passing of a corporate tax to fund homelessness, an additional tax on the cannabis retailers, and funding arts and culture through a portion of the hotel tax.

Homeless services
By far the most contentious and talked about measure this election season, Proposition C, passed with 59.91 to 40.09 percent of the vote. It required 50 percent plus one to pass.

Although it was approved, opponents have raised a concern that a two-thirds vote wasn't required, as it is for most tax measures. Legal action may be forthcoming, they said.

Prop C, dubbed "Our City, Our Home" by supporters, could raise an estimated $300 million annually to fund homeless services and prevention by taxing companies between 0.175 percent and 0.690 percent on gross revenues over $50 million. For businesses generating more than $1 billion in revenue and have 1,000 employees nationwide, the tax rate is 1.4 percent of their payroll expenses.

Supporters were joyous at an election night party at Mission district bar Roccapulco Tuesday, November 6. Brian Basinger, a gay man who's executive director of the Q Foundation, which provides supportive housing for HIV-positive people, said he hopes the local government gets the voters' message that they want to see aggressive efforts to help lessen homelessness.

"The voters of San Francisco want immediate action. They want results today, not tomorrow, not five years from now," he said at the party. "I hope our opposition takes note about this and understands that this is the will of the voters."

He said that, in the first few months, implementation of Prop C depends on the city. He hopes it collects the taxes right away and makes the funds available.

Jennifer Friedenbach, executive director of the Coalition on Homelessness, was overjoyed at Tuesday's party.

"The people have spoken," she told supporters. "They are resoundingly calling for the city to address this crisis and finally the city will have the resources to do just that."

"I agree we need to build more housing and shelters, help those suffering from mental illness and substance use disorders, and help people to exit homelessness — and business can pay more to make that happen," Breed stated. "I have already had conversations with both proponents and opponents of Prop C about coming together to work on this issue as one city, and we can and will do just that. That starts by getting stakeholders to sit down together to plan how we are going to deliver on the goals of Prop C, enact strong accountability measures, and address any legal uncertainties in the measure."

The Board of Supervisors would determine how to distribute the money collected from the new tax every year within these confines: dedicating at least half to permanent housing solutions, 25 percent for mental health services, up to 15 percent for services for people who have recently become or are at risk of becoming homeless, and up to 10 percent for short-term shelter and access to hygiene programs for homeless. An advisory committee would monitor the fund.

Numerous local officials including gay state Senator Scott Wiener (D-San Francisco), Assemblyman David Chiu (D-San Francisco), and the San Francisco Chamber of Commerce had come out against the measure, primarily citing a lack of accountability for the funds, a possible negative impact on the local economy, and that the $300 million annually the city already allocates to homelessness needs to be audited for effectiveness before a large tax increase like Prop C is rolled out.

Some critics of the measure, including Breed, said before the election that San Francisco might not see the funds due to the possibility of legal action.

There is an ongoing lawsuit to invalidate Prop C and similar signature-driven tax measures passed earlier this year, arguing that such tax measures require a two-thirds majority to pass.

The No on C campaign circulated a news release Election Night echoing that message.

Salesforce CEO Marc Benioff was a strong late backer to Prop C, funding millions of dollars in advertising for it in the final weeks of the campaign. His company would be required to pay the tax.

A supporter at the Yes on Prop C party said, above all, it's time the tech giants in the city start to help fund the problems that have arisen partly from their impact on the city.
"The companies need to start paying for the imprint they've made on the city," said Liz Franczak, 33, who was born and raised in San Francisco. "There practically are tent cities outside every tech company. The social impact they have made is not being met by their monetary and fiscal impact."

Authored by Board of Supervisors President Malia Cohen, the measure will see an additional tax on recreational marijuana retailers in San Francisco. The city can impose a tax rate between 1 and 5 percent on marijuana businesses with gross receipts over $500,000, depending on the type of cannabis business activity and amount of a businesses' gross receipts. As well, the supervisors have the authority to decrease or increase the tax rate, up to a maximum rate of 7 percent. The additional tax does not apply to revenues from the retail sales of medical marijuana.

David Goldman of the Brownie Mary Democratic Club and leader of No on D, told the Bay Area Reporter Wednesday that people who purchase cannabis in San Francisco should expect higher prices.

"Historically, in California local voters who vote on local cannabis taxation pass it in the 60s 70s [percentages]" Goldman said. "If people had understood the nuances of the initiative, they would have voted it down."

He also said he believes this will drive people back to the black market to get their marijuana and that retail prices for medical cannabis will increase by 7 percent. He said although the tax does not apply to revenue from medical cannabis, it does not exempt medical cannabis dispensaries that manufacture edibles.

Supporters of the measure included local LGBT organizations, the Alice B. Toklas Democratic Club and the Compton's Trans Cultural District along with Supervisors Norman Yee, Catherine Stefanie, and Katy Tang.

Voters OK arts funding
It was a win for the arts community with the passage of Proposition E: the Partial Allocation of Hotel Tax for Arts and Cultural Purposes. It needed a two-thirds vote and received 74.28 percent to 25.72 percent. It was backed by Breed, Tang, and Supervisor Aaron Peskin, as well as the Hotel Council of San Francisco, San Franciscans for the Arts, and the United Educators of San Francisco.

Up to 1.5 percent of the money from the 8 percent base hotel tax that the city already collects will now be dedicated to arts and cultural functions. The current hotel tax, which includes a 6 percent tax surcharge for hotel rooms that is not part of the ballot measure, is currently available for any public purpose.

The measure is not a tax increase, but a reallocation of funds for various arts and cultural functions. When the hotel tax was first implemented in 1961, a portion of the funds were dedicated to the arts, but over time the city has diverted it to other purposes, the San Francisco Voter Guide noted.

From the measure, a permanent funding stream will now be provided to the city's cultural districts including the newest, Compton's Transgender Cultural District in the Tenderloin. Other organizations that will receive funding if the measure passes include the San Francisco Museum of Modern Art, the Exploratorium, and San Francisco's ballet, opera, and symphony companies.

Seawall fix approved
It seems as though the threat of an earthquake and rising sea levels were enough to overwhelmingly sway voters to help repair and improve the Embarcadero Seawall. Proposition A: Embarcadero Seawall Earthquake Safety Bond passed with flying colors, getting 81.96 to 18.04 percent of the vote.

Its passage allows the city to borrow up to $425 million in general obligation bonds over 30 years to repair and upgrade the seawall, which supports Muni, BART, power and water utilities, and historic piers and tourist destinations. It was put on the ballot by a unanimous vote of the Board of Supervisors.

The bonds will fund ongoing design and construction improvements to address the most significant earthquake and flood risks to the wall, which runs about three miles from Fisherman's Wharf to the mouth of Mission Creek, near AT&T Park.

According to the city and the Port of San Francisco, repairing and improving the wall is expected to cost at least $2 billion.

Voters say yes to privacy
Privacy rights are a concern among San Franciscans, as demonstrated by the passage of Proposition B: City Privacy Guidelines. The measure was approved 56.79 to 43.21 percent. It required 50 percent plus one to pass.

The charter amendment will create guidelines for city officials and agencies to refer to when considering the adoption of privacy-protective laws, regulations, and policies. The nonbinding measure does not require that officials implement any of the guidelines.

Within the legal text of the measure it states the city, when considering the adoption of privacy-protective laws, should ensure personal information is collected, used, and retained only for lawful and authorized purposes. As well, it aims to mitigate bias in the collection and sharing of personal information.

The amendment also gives elected officials the ability to make changes to San Francisco's voter-enacted Sunshine Ordinance, which governs city meetings and was approved in 1999.