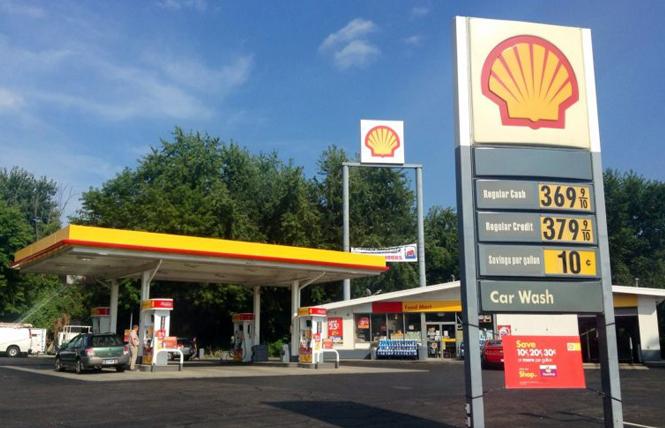 A measure that would have repealed California's gas tax lost Tuesday.

It was a no-go for the controversial repeal of the California gas tax passed by the Legislature in 2017, as state voters decided they can live with the tax increase that is funding road and infrastructure repairs.

If passed, the measure would have eliminated $5 billion in existing transportation funding that is generated from the tax while also requiring certain fuel taxes and vehicle fees to be approved by the electorate.

The proposition was spearheaded by gay former San Diego City Councilman turned conservative talk radio host Carl DeMaio, who blamed the measure's failing on the wording of the voter guide, which initially did not mention the repeal of the gas tax.

"There is an error on your election ballot! Prop 6 was intentionally mis-labeled by deceptive Sacramento politicians," DeMaio said on his Facebook page November 4.

Rent control loses
The measure giving municipalities power to vote on expanding rent control was struck down with 61.7 to 38.3 percent. The initiative statute would have repealed the Costa-Hawkins Act, a state law that prohibits cities from enacting rent control laws.

Opposition campaigns said the repeal would make the housing crisis worse by deterring developers and investors from building new housing. Tom Bannon, CEO of the California Apartment Association, tweeted on Election Night, "The stunning margin of victory shows California voters clearly understood the negative impacts Prop. 10 would have on the availability of affordable and middle-class housing in our state."

A Facebook post authored by Yes on 10, said, " We lost last night, but we banded together and created a formidable, statewide coalition for fair, just, affordable housing in California. The fight will continue in 2019. That's a promise."

Chickens win again
It was a win for animal rights with Proposition 12 receiving 61 percent of the vote to 39 percent. The citizen initiative creates new minimum requirements for farmers to provide more space for egg-laying chickens, breeding pigs, and calves raised for veal. It also prohibits sales of meat and egg products from animals confined in noncomplying manner. Voters approved a previous measure 10 years ago.

The Animal Legal Defense team celebrated victory on Twitter saying, "The votes are in, and we made history for animals. Yesterday, a majority of Californians said YES to Prop 12, increasing protections for some of the most abused animals in the country — baby cows, egg-laying hens, and mother pigs. Congratulations, California!"

Other measures
Privately-owned ambulance companies will continue their current practice of having emergency medical technicians (EMTs) and paramedics stay on-duty during their meal and rest breaks after Prop 11 passed 59.4 to 40.6 percent.

Backed by the state's largest private ambulance company, the initiative statute will require the companies to attempt to reschedule meal and rest breaks that are interrupted by a 911 call.

Among one of the more controversial measures, Proposition 8, which proposed to regulate the amounts outpatient kidney dialysis clinics charge for dialysis, failed Tuesday, 61.6 to 38.4 percent.

If passed, the measure would have required for-profit dialysis clinics to have their revenues limited by a formula and could have been required to pay rebates to certain parties, primarily health insurance companies, that pay for dialysis treatment.

California voters decided to give the Legislature the go-ahead to start the process to change to permanent Daylight Saving Time. Unofficial returns had the measure winning 59.8 to 40.2 percent.

As San Francisco and many other California cities face a housing crisis, Proposition 1 saw success at the ballot box winning 54.1 to 45.9 percent. The measure authorizes $4 billion in bonds to fund specified housing assistance programs, including veterans.

In another housing measure, voters approved Proposition 2 by a margin of 61.1 to 38.9 percent. It authorizes bonds for existing housing programs for the mentally ill and homeless.

One of the largest proposed water bonds in the state's history lost Tuesday. Proposition 3 would have authorized bonds to fund projects for water supply and quality, watershed, fish, wildlife, water conveyance, and groundwater sustainability and storage.

Children's hospitals throughout the state will undergo expansion and renovation with the passage of Proposition 4, which won 60.6 to 39.4 percent. It authorizes $1.5 billion in bonds to fund grants for construction, expansion, renovation, and equipping qualifying children's hospitals.

Proposition 5, the senior property tax reduction, lost 58.1 to 41.9 percent. The measure was developed by the California Association of Realtors and would have expanded the special rules that give property tax savings to eligible homeowners when they buy a different home.