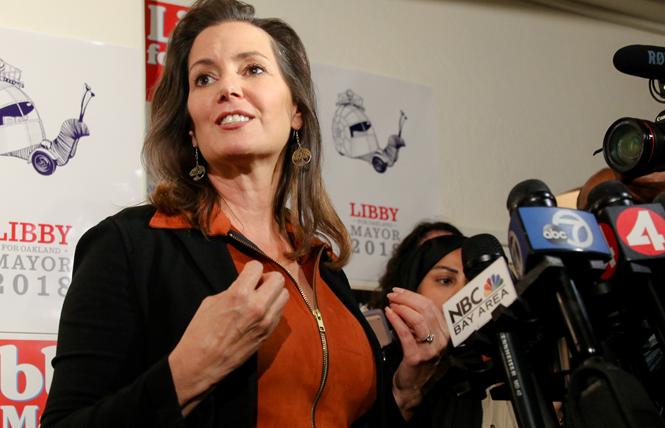 Schaaf was upbeat at her election headquarters Tuesday, where television vans were parked outside and people greeted the mayor.

Schaaf ran on a platform of "Oakland Tough," a reference in part to her standing up to the Trump administration and the president himself. In February, she tweeted that "credible sources" told her that an immigration sweep was imminent and said it was her "duty and moral obligation" to warn families.

The raids by Immigration and Customs Enforcement did happen resulting in more than 150 arrests in California. President Donald Trump and Attorney General Jeff Sessions both criticized Schaaf for her action, which she said she would do again.

A strong ally to the LGBT community, Schaaf was endorsed by the East Bay Stonewall LGBT Democratic Club.

Schaaf said she attributed her strong early showing to people's satisfaction with her first term, even as she supports increased funding for homelessness and education, particularly the Oakland Promise program that helps parents save for their children's college education.

"Oaklanders like the direction the city is going," she said.

Vincent Leung, a gay man and Schaaf supporter who volunteered on both her mayoral campaigns, told the B.A.R. he was pleased with the early numbers.

"I'm so thrilled at the strong showing," he said, adding that more progress can be made on issues affecting the city during Schaaf's next term.