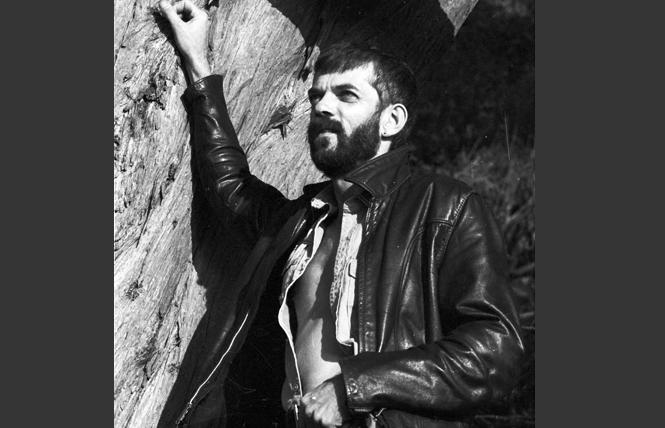 Jim Stewart, a columnist for the Bay Area Reporter's BARtab section and a Folsom Street leather pioneer, died October 15, 2018, at his home in Ludington, Michigan, where he had retired. He was 75.

The cause of death was pneumonia two days after Mr. Stewart broke his ankle in a fall, said his longtime friend, Jack Fritscher.

Mr. Stewart, a gay man, was the author and cover model of his award-winning 2011 memoir, "Folsom Street Blues," and a photographer for Drummer magazine. In 1976, he was among the first leather artists to move South of Market to Clementina Street.

BARtab editor Jim Provenzano said that Mr. Stewart contributed to the nightlife section several years ago. He also wrote the section's BARchive gay bar history column in 2013 and 2014, which included many of his historic 1970s gay nightlife photos of SOMA bars, Halloween, and the Russian River scene.

Fritscher said that as a member of the SOMA Open Studio movement, Mr. Stewart chronicled the creative epiphanies of the Folsom Street art scene with intimate friends he wrote about such as Tool Box bar founder Chuck Arnett, 1974 Oscar streaker Robert Opel, leather poet Camille O'Grady, and Old Reliable Studio photographer David Hurles. While managing a movie theater in 1973, he met Fritscher, a writer, who sponsored his move to San Francisco in 1975.

As a working carpenter in 1977, he built the interior of Fey-Way Studio, at 1287 Howard Street, where founder Opel exhibited his work alongside Robert Mapplethorpe, Tom of Finland, and Rex, in the space where Opel was murdered in 1979. Mr. Stewart appeared in "Uncle Bob," the 2010 documentary film about the Opel killing. He wrote fiction for Jim Moss' Folsom magazine. With his Nikon, he shot pictures for the Society for Individual Rights and documented Christo and Jeanne-Claude's "Running Fence." He founded his Keyhole Studios in 1976.

Mr. Stewart's strong images of Folsom Street sexuality, including his iconic photos shot in the Slot Hotel, appeared in exhibits at bars like the Ambush; in Drummer as early as issue 14, May 1977; and in the 2008 book "Gay San Francisco." He managed and photographed various Folsom leather bars like Allan Lowery's Leatherneck, and the Drummer Key Club and pool at 11th and Folsom streets, now the gay-owned Oasis nightclub.

Mr. Stewart was born November 11, 1942. He earned his master's degree at Western Michigan University. He left San Francisco in the 1980s when hired as head of the Chicago Public Library's Social Sciences and History Department. He is survived by his husband, Kenneth Warner. Together 35 years, they married in California in 2008.