Transmissions: Marching into the future 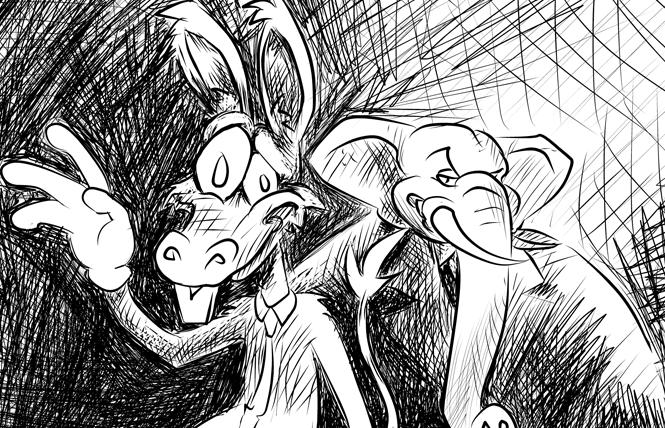 My readers are all time travelers. For me, the 2018 midterm is still a moment in my near future, not a moment of the near past. I don't know the outcomes and can only make a somewhat educated guess about what's to come.

Given the polls from the 2016 election, and all the shenanigans that may have led to our current administration, I scarcely want to rely on polling that tells me that at least one house of Congress will go blue.

No matter what happens, if we flip all, or part, of Congress, or if the worst case scenario happens and the hoped-for "blue wave" fails to meet the shore for whatever reason, we will have our work cut out for us.

The Trump administration has made it clear that it wishes to erase transgender people from all federal protections, and have even presumably made overtures with the United Nations to attempt to remove gender from its human rights documents.

Win or lose, Question 3 in Massachusetts may pave the way for future Proposition 8-style referendums to curtail transgender rights in the name of "safety" and "privacy." A loss, of course, will do the most immediate damage.

Meanwhile, we're seeing an increase in attacks against transgender people in general, both over the usual "bathroom" specters as well as newer threats, such as the "rapid onset gender dysphoria" theory and other attempts to harm young transgender and nonbinary people. As Julia Serano wrote recently on Medium, "While ROGD is scientifically specious, the concept serves a very clear practical purpose. It provides reluctant parents with an excuse to disbelieve and disaffirm their child's gender identity, under the presumption that it is merely a byproduct of ROGD."

To put it bluntly, we have a lot of work ahead, and it's not going to be easy work at that.

Not all of us will be able to, but it will be incumbent upon all of us who can to stand up and be visible, willing to speak out for our rights in a hostile time. It's going to be a monumental challenge, and we may face some very bleak times and terrible losses along the way.

We will need to come together more than we have before. We will need our allies, and they will need us. Our strength will come from our numbers, as well as the love and hope we can provide to each other.

Any victories we gain will be hard-won. Indeed, I would liken things to a siege. Our best hope is to hold onto some of what we have, and outlast those who choose to stand against us.

Those of us who've been in the fight for transgender rights for the long haul, well, we may be proud of all we've accomplished, but we know the cost. For myself, it is an aching wound, watching things I had at least a small hand in get swept to the floor, knowing that it's back to the fight after a decade of relative success.

Yet as bleak a picture I paint, I also warm my palate a bit.

You see, I have a historical perspective in mind. When I first came into my own as a young trans woman, it was the tail end of George H.W. Bush's presidency and still within the era where the notion of transgender rights was a bit of a pipe dream.

There were still areas where anti-LGBT cross-dressing laws remained on the books, though they weren't much enforced. You also wouldn't find anyone enforcing pro-transgender laws then, either. Such things were still a long way from existing.

The decades before that were even harsher. Those cross-dressing laws were used to jail LGBT people, and few could even dare dream of any sort of laws to protect themselves if they were ever outed as trans. Accessing care itself was a herculean task. We lived in the shadows.

There are some important things, however, that we did not have then that we do today.
For one, as we have grown in prominence, we have discovered our past. We have reclaimed our lost history, and know our heroes of days gone by. This is important: knowing where we come from aids us in our future, and being aware of who we were affords us the ability to know who we are.

Secondly, we know what is possible. Those of us in the past may have only assumed that we couldn't reach higher. Today we know better. The transgender community is also one with its aspirational figures in the media, in politics, in sports, in all sorts of fields. Once again, we know what can be and know that we are not limited.

Finally, and most importantly, we have each other. Decades past, transgender people did not get much of an opportunity to seek each other out. In many cases, it was highly discouraged by gatekeepers, who might refuse us care for doing so. Today, a click of a mouse can connect us across the world, allowing for new avenues of support and education for our community. This is where our strength truly is. While we have each other, we cannot really be stopped.

So, my community of time travelers, heed this voice from your past. No matter how dark the days ahead may end up being, seek out our beautiful light, and let's march on together into this uncertain future as one.

Gwen Smith's TARDIS is disguised as a 1964 Rambler. You'll find her at www.gwensmith.com.