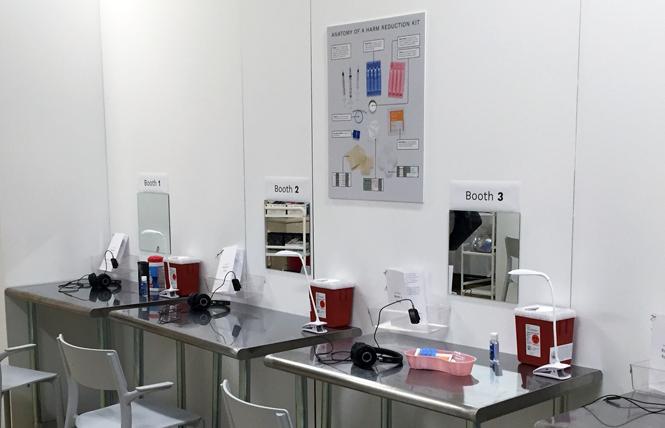 The Safer Inside demonstration project in August featured injection stations like this one to show the public what a supervised injection facility might look like. Photo: Liz Highleyman

Local elected officials, public health experts, and advocates expressed disappointment over Governor Jerry Brown's veto of the safe injection site pilot program bill, with some vowing to continue their efforts to open a supervised injection facility in the city.

On Sunday, hours before the October 1 deadline, Brown vetoed Assembly Bill 186, legislation that would have allowed San Francisco to open a pilot safe injection site.

"Fundamentally, I do not believe that enabling illegal drug use in government-sponsored injection centers — with no corresponding requirement that the user undergo treatment — will reduce drug addiction," Brown wrote in his veto message.

San Francisco Mayor London Breed, who supported the bill, said the city will continue to work toward the pilot project.

"If we are going to prevent overdoses and connect people to services and treatment that they badly need to stop using drugs in the first place, we need safe injection sites. If we are going to stop the drug use we see in public every day and get needles off our streets, we need proven public health solutions," Breed said in a statement. "Despite this veto, we will still continue to work with our community partners on trying to come up with a solution to move this effort forward."

Breed, who lost her younger sister to a drug overdose, has been a proponent of supervised facilities, including working with Glide Memorial Methodist Church to open a realistic safe injection demonstration site in late August. (Drug consumption was not permitted during the demonstration period.)

"As San Francisco, like thousands of communities across our nation, struggles to respond to the opioid crisis, Glide supports the evidenced-based, life-saving care offered through safe injection sites," said Glide Foundation President and CEO Karen Hanrahan. "Glide will continue to support overdose prevention programs and will continue to work with Mayor Breed, community advocates, and public health organizations to make them possible."

Breed has not stated in detail how she intends to proceed and appears to still be deliberating. The recent resignation of the city's health director, Barbara Garcia, and the ongoing search for a replacement complicates the situation.

Health Commission President Dr. Edward Chow suggested at a recent meeting that candidates for the next health director would be expected to support safe injection sites."

"I think it's premature at this time to say that I would go ahead with opening a site," Breed told the San Francisco Chronicle in an interview this week. "I think it's more appropriate to say I'm not giving up on the possibility."

Science versus politics
Supervised injection facilities allow people to use drugs under the watch of medical staff, reducing the risk of overdose deaths. They provide sterile needles, which prevents transmission of HIV and hepatitis B and C, and offer clients an entry point for seeking medical care and addiction treatment. Indoor sites also reduce street-based drug use and improper syringe disposal, seen as a growing problem in the city.

There are currently around 100 safe injection sites worldwide. San Francisco — home to an estimated 22,500 people who inject drugs — is among several cities, including New York, Philadelphia, and Seattle, vying to open the first supervised injection facility in the United States.

A growing body of evidence shows that supervised injection sites can reduce drug-related harms, including overdose deaths and infectious disease transmission, without worsening crime or other negative outcomes. One recent study found that a single supervised injection site in San Francisco could avert at least three new HIV infections and 19 cases of hepatitis C per year, while saving the city $3.5 million annually.

The same day, U.S. Deputy Attorney General Rod Rosenstein penned an opinion piece in the New York Times, stating, "Because federal law clearly prohibits injection sites, cities and counties should expect the Department of Justice to meet the opening of any injection site with swift and aggressive action."

In response to the veto, Wiener said opposition at the federal level should not put a halt to efforts to open safe injection sites.

"We should not allow threats from a backward federal government to stop us from helping people who are dying on our streets," he said. "We are definitely not giving up on this important public health strategy."

On Tuesday, Lieutenant Governor Gavin Newsom, who's leading in the polls for the gubernatorial race, told reporters he disagreed with Brown's veto on AB 186.

Brown's statement rejecting the legislation addressed the federal warning, as well as his belief that people who use drugs should be required to undergo addiction treatment.

"[T]he United States Attorney General has already threatened prosecution and it would be irresponsible to expose local officials and health care professionals to potential federal criminal charges," Brown wrote. "Our paramount goal must be to reduce the use of illegal drugs and opioids that daily enslaves human beings and wreaks havoc in our communities. ... The community must have the authority and the laws to require compassionate but effective and mandatory treatment. AB 186 is all carrot and no stick."

Some advocates suggested Brown's decision aims to avoid another showdown with the Trump administration. U.S. Attorney General Jeff Sessions has already sued the state to stop a measure that Brown did sign on Sunday that would restore net neutrality provisions repealed by the Federal Communications Commission late last year.

Others said Brown's signing statement reflects ignorance of scientific evidence and fails to recognize that drug addiction treatment is not universally available and does not work for everyone.

"As a person who works with drug users on a daily basis, I am shocked by the ignorance of Governor Brown regarding the success of overdose prevention programs all over the world," Glide harm reduction program manager Paul Harkin told the Bay Area Reporter. "I found the image of taking a stick to people with substance use disorders to be inhumane and ill-informed. The evidence shows that coercive treatment does not work."

"How many people will die of an accidental overdose before we get these services open here? Governor Brown has blood on his hands," Thomas told the B.A.R. "I'm confident that Mayor Breed will work with community organizations to figure out how to move forward with these desperately needed services here in San Francisco."

San Francisco AIDS Foundation CEO Joe Hollendoner called attention to the fact that this is Brown's final year in office.

"The suggestion that this policy is too much carrot and not enough stick implies that substance use treatment should be punitive rather than compassionate and based in best practice," Hollendoner said in a statement. "California's next governor must support the creation of overdose prevention centers and other public health interventions that will effectively address the HIV and opioid epidemics in California."