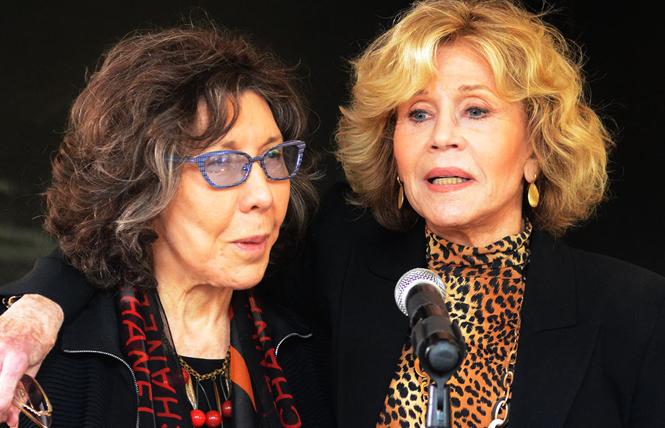 Lily Tomlin, left, and Jane Fonda spoke in San Francisco Friday in support of the One Fair Wage campaign, which would apply the minimum wage to both tipped and non-tipped workers. Photo: Rick Gerharter

Hollywood legends Jane Fonda and Lily Tomlin visited Piccino Cafe in the Dogpatch neighborhood of San Francisco last Friday to raise awareness and funds for One Fair Wage, a movement that seeks to raise the minimum wage for tipped restaurant workers across the country.

Around 50 people gathered to hear them speak and to pose for photos with the stars for a $500 donation. The event, called "Coffee and Conversation with Jane Fonda and Lily Tomlin," was organized by Emmy Award-winning journalist Grace Kahng in conjunction with Horizons Foundation.

Kahng noted that women arrested in trafficking stings tended to be working mothers and new mothers. She noted that there was a link between these low-level workers and their ability to be exploited.

"We're doing this because women have been underpaid as compared to their male counterparts," Sagan said. "This is a restaurant owned and operated by women, so we support fair wages. I didn't know the disparity was this large; $2-3 an hour is not a living wage."

"When we started 13 years ago it was the first restaurant we ever worked in," added Rogat. "We made a lot of mistakes. We believe in respect and inclusiveness."

Fonda and Tomlin, who came out as a lesbian in 2013, were then introduced by Pam David of Horizons Foundation. "A lot of LGBT people have worked in restaurants, so this issue is dear to our hearts," David, a lesbian, said.

Fonda and Tomlin stepped up to the microphone to applause. "We've been having lunch," said Tomlin. "It's quite delicious."

"Because the people here are paid well," Fonda pointed out.

Tomlin then addressed the crowd as Judith Beasley, one of the characters she is known for playing. Beasley is a housewife and mother from Calumet City, Illinois.

"Waiting on tables was the only skill set I had," Beasley said. "It requires all the resources I have. I have to be ready for every situation. You're waiting on people who can turn on you on a moment's notice — the complaints start before the food and the complaints get worse when the food comes. If I've heard come on, be a good sport, I've heard it one thousand times, and that's just from the boss when he was trying to get me in the back room."

Tomlin, as Beasley, also called for a livable wage and paid sick days. She referred to the National Restaurant Association as "the other NRA."

"Tips are at the discretion of the diner and, thanks to the National Restaurant Association, our wages have remained stagnant just because we get tips," she said.

"Lily and I have been traveling around Michigan on behalf of Restaurant Opportunities Centers United," Fonda said. "Lily comes from Detroit — it gives me street cred to be with her as I grew up in privilege, but Lily grew up in a gritty city in a gritty family."

Tomlin then interjected, recalling her own personal hard times working in restaurants.

"People want to know how come we got involved in this issue," Fonda said. "When the election happened in 2016, I felt like I was in a nightmare. I understand why [Donald] Trump won — there's so many people in the middle of the country that no one was talking to. I was looking for the kind of local grassroots work that was going to have an effect on the people who felt they were forgotten. I learned during the anti-war years the importance of grassroots activism and of going door-to-door."

One Fair Wage is working on a campaign in Michigan. According to its website, there was a ballot measure slated for November in the state, but lawmakers adopted it themselves, which removed it from the ballot. One Fair Wage argues that state lawmakers will attempt to gut the minimum wage law to repeal a raise for tipped workers.

"When we began this effort, a survey was done asking people if they'd vote," she said. "Thirty percent said yes. If there was a One Fair Wage initiative on the ballot it goes up to 60 percent. This is about building a movement and getting people to the polls. You can't live on $2.13 an hour, it all goes to taxes. You are forced to rely on tips."

Fonda pointed out that tipped workers are forced to put up with bad behavior, including sexual harassment.

"The workers want to feel respected," Fonda said. "They want to feel like professionals."
Saru Jayaraman, co-founder and president of Restaurant Opportunities Centers United, addressed the audience and noted that, in 1938, everyone got the right to earn the minimum wage except tipped workers.

"Seventy percent of tipped workers in the U.S.A. are women," she said. "Women's work in the U.S.A. is not valued. The largest employer of women gets away with paying their workers $2 an hour. These are the workers who have the highest rates of sexual harassment — restaurant workers are encouraged to show more cleavage and dress more sexy. It sets the floor for harassment across the economy. For a lot of LGBT workers who have to leave their homes, this is how they earn a living and this is a constant source of harassment."

"If California can do it then everyone can do it," she said. "In California everyone has done it for decades and we have a booming restaurant industry. We lost Michigan to Trump by 11,000 votes. There are 435,000 restaurant workers in Michigan who do not vote, we're mobilizing those 435,000 workers to go vote. We've learned our lesson and we're not going to ignore those people again. We need your help, we can win this. We will raise this wage out of slavery times and cut sexual harassment."

Kahng informed the Bay Area Reporter that in addition to the Piccino's gathering, there were two other events in private homes. She said that over $200,000 was raised at the three events, which were coordinated by her company, Santoki Productions.

"The Piccino event was a success because every single person at the event had signaled that they had been educated and activated by offering to donate during Jane's call to action," Kahng said. "Just the hand-raise itself raised $10,000. Jane and Lily were so incredibly moved by the outpouring of affection for the two of them. What's lovely about San Francisco is that people appreciate Jane's history of activism."

Kahng added that the Piccino owners had opened a new cafe called Noon All Day, where they hope to hold a future event.

Jayaraman told the B.A.R. that she was quite happy with the event's turnout.

"We were more than happy with the overwhelmingly positive response to One Fair Wage at all our San Francisco events," she said. "We raised far more than we anticipated. In the San Francisco Bay Area and everywhere, people overwhelmingly support all people, women and men, being able to earn enough to feed their families, and not having to struggle with sexual harassment to feed their families in tips."

On Thursday (September 20) at 8 p.m. Tomlin returns to the Bay Area to perform a two-hour show at Zellerbach Hall in Berkeley. The show is a benefit for One Fair Wage.