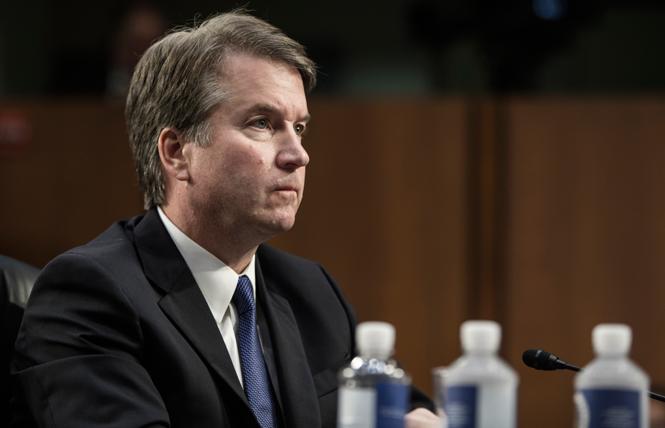 Judge Brett Kavanaugh faces questions about an alleged sexual assault when he was in high school. Photo: Rudy K. Lawidjaja

LGBT groups have been among those calling for the Senate Judiciary Committee to delay its vote on the confirmation of Judge Brett Kavanaugh to the U.S. Supreme Court. They were already opposed to his nomination, but on the heels of allegations that he may have sexually assaulted a 15-year-old girl while he was in high school, their clamor, and that of many others, escalated dramatically.

As of Tuesday morning, the judiciary committee appeared to signal it would not hold its scheduled confirmation vote Thursday and would hear from Kavanaugh and his accuser in a public hearing Monday.

The Human Rights Campaign, Lambda Legal Defense and Education Fund, Equality California, the National Center for Lesbian Rights, the National Center for Transgender Equality, and the LGBT Bar Association of New York joined numerous other civil rights groups in signing onto a statement crafted by the Leadership Conference on Civil and Human Rights. The statement said the Senate should not move forward with Kavanaugh's confirmation "without the results of a fair, nonpartisan, and thorough process."

Shannon Minter, NCLR legal director, issued a separate statement, adding, "The allegations of sexual assault raised against Brett Kavanaugh are detailed, credible, and corroborated by reports to third parties. No one facing such allegations should be confirmed to our nation's highest court without a full investigation of these claims."

Senate Judiciary Committee Chairman Charles Grassley (R-Iowa) had not made clear how, exactly, he would handle the allegations. At first, the allegations were anonymous but timely: the accuser had contacted her member of Congress and Senator Dianne Feinstein (D-California) about Kavanaugh in July, when she first heard that President Donald Trump was considering him for a Supreme Court seat. Feinstein kept the allegations secret from other senators, saying she was honoring the woman's request for privacy.

But reports leaked out and Feinstein began informing Senate colleagues privately and then shared the woman's letter with the FBI, with regard to Kavanaugh's confirmation. On September 14, New Yorker magazine published its story, detailing the allegation but not identifying the woman. Media attention riveted to the news and by Sunday, the accuser — Palo Alto University psychology professor Christine Blasey Ford — confirmed to the Washington Post that she was the accuser.

Sunday night, CNN reported that Senator Lisa Murkowski (R-Alaska) "might have to consider" delaying Kavanaugh's confirmation. On Monday, Trump adviser Kellyanne Conway told the media that Blasey Ford would be heard and should be heard. And before noon Monday, Senator Susan Collins (R-Maine) said both Kavanaugh and his accuser should testify under oath before the judiciary committee. Even Trump on Monday said he believes the committee should "hear everybody out" even if it takes a "little delay."

Many speculated that Trump's uncharacteristic willingness to hear from Kavanaugh's accuser may have been driven by Collins and Murkowski's concerns.

Kavanaugh's confirmation would definitely be in jeopardy if two Republican senators withhold their support. The Senate has 51 Republicans and Kavanaugh needs 51 votes for confirmation.

Three Democrats have been said to be considering a vote for Kavanaugh, but after Blasey Ford put her name to the allegations, Democratic Senator Heidi Heitkamp (North Dakota) posted a message on Twitter saying the judiciary committee needs to investigate the allegations thoroughly. Senator Joe Donnelly (Indiana) said the committee should "hold off" on Thursday's scheduled vote. And Senator Joe Manchin (West Virginia) said the committee should give both Kavanaugh and Blasey Ford a chance to be heard.

Blasey Ford said that, when she was 15, she attended a small party at a private home. She said that, when she got up to go to the bathroom, Kavanaugh, who would have been 17, and another boy followed her and pushed her into a bedroom and onto a bed. Kavanaugh, she said, held her down against her will, covered her mouth to keep her from screaming for help, and the other boy turned up the music and both goaded Kavanaugh on and yelled stop. Blasey Ford said Kavanaugh, who was "stumbling drunk," fumbled to get her clothing off, ground his body into hers, and seemed to be attempting to rape her. But when Kavanaugh's friend — who has been identified as Mark Judge — jumped on top of both of them, she was able to escape.

Kavanaugh has repeatedly denied the allegations, as has Judge.

Blasey Ford has retained the legal services of a Washington, D.C., civil rights employment lawyer who is well known to the LGBT community. Debra Katz filed a complaint against President George W. Bush's Office of Special Council leader Scott Bloch. Bloch notoriously transferred LGBT people out of their jobs in his office.

Alumnae of Blasey Ford's private high school in Maryland released a draft letter Monday, saying Blasey Ford's experience "is all too consistent with stories we heard and lived while attending" Holton-Arms private school. The letter, however, does not specify stories or experiences with Kavanaugh.

All this happens as the U.S. Supreme Court prepares to open its new season on October 2. The Senate Judiciary Committee website indicated Tuesday that an additional hearing on Kavanaugh's confirmation will be held Monday, September 24, at 10 a.m. It did not specify that Blasey Ford and Kavanaugh would appear at that hearing, and Grassley told reporters the hearing was to "give these recent allegations a full airing."

On Monday, Grassley suggested the "standard procedure" to look into the allegations is to conduct telephone calls by him and Feinstein with the "relevant parties." But Democrats are reportedly opposed to that idea, Feinstein is being soundly criticized for having kept the woman's allegations private until just last week, and the enormous media attention the issue has gotten makes that route seem unlikely.