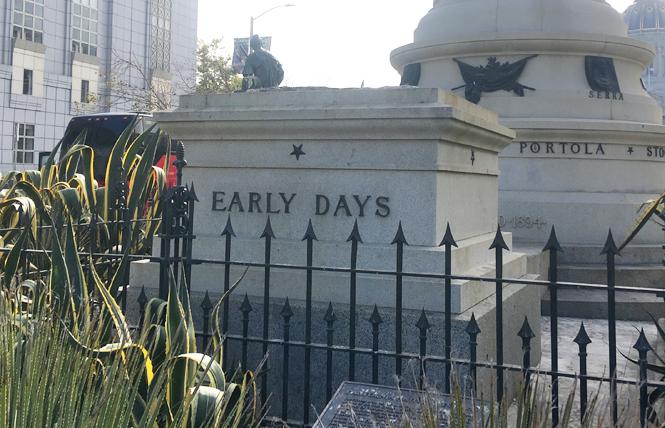 After over a century, "Early Days" — a statue many considered to be racist and inflammatory — no longer stands in San Francisco. Photo: Christina A. DiEdoardo

As the hours crept toward dawn Friday, September 14, most of San Francisco was asleep. Some of those who weren't were making history in Civic Center next to the main branch of the San Francisco Public Library.

City workers took down the controversial "Early Days" statue — which depicted an indigenous American prostrate before a Spanish settler and a Catholic missionary — to the cheers of indigenous activists, some of whom have fought for decades to remove it.

Many saw the work as racist and inflammatory for a variety of reasons, ranging from its glorification of the Spanish invaders and missionaries (and the corresponding dehumanization of indigenous Americans) to the fact that the indigenous American shown doesn't even resemble members of those bands active in the area during the period supposedly depicted by the statue. To many activists, it was San Francisco's equivalent to the Confederate statues that have been brought down — legally or otherwise — around the country in the last few years.

The issue appeared to have been resolved in March, when the San Francisco Arts Commission voted to remove the statue and put it in storage. However, thanks to a successful appeal by Petaluma attorney Frear Stephen Schmid — who was publicly reproved by the State Bar of California in 2012 after he (among other things) reportedly told a police officer at a sobriety checkpoint to "fucking shoot me" — the San Francisco Board of Appeals previously reversed the commission until reviewing the matter again at its meeting Thursday, September 13, where it voted unanimously to reverse itself and reinstate the commission's ruling to remove the statue.

Beyond getting rid of a racist eyesore, the decision ends a dispute over the power and jurisdiction of the arts commission and eliminates what had been an embarrassing situation for then-mayor Mark Farrell and Mayor London Breed.

Power Exchange owner doxes himself
For reasons best known to him, in early September, Michael Powers — who owns the Power Exchange sex club in the Tenderloin — declared himself to be a member of the Proud Boys and the III Militia on his Facebook feed. The Southern Poverty Law Center considers the former to be a hate group and the latter to be an anti-government militia, and both have been linked to violent acts around the country.

Given recent transphobic public posts from Powers, I sense he's not doing his new friends with the Proud Boys any PR favors in their continuing effort to claim that, gosh darn it, they are neither white supremacists nor fascists, but simply misunderstood people who believe in the "superiority" of "Western Culture."

That said, it's always nice when hostiles like Powers dox themselves, since it puts the community on notice of where a dollar spent at the Power Exchange is going. Fortunately, there are alternatives to patronizing it, like our friends at Mission Control in the East Bay, which is both collectively owned and fash-free.

Brown gets gun show ban bill
The countdown is on for Governor Jerry Brown to decide the fate of Senate Bill 221, a bill by gay state Senator Scott Wiener (D-San Francisco), which would ban gun shows at the Cow Palace complex.

After passing the Assembly and Senate, the bill reached Brown's desk September 6. He has until September 30 either sign it or veto it (as he has a previous attempt to ban the events at Cow Palace). If he does neither, the measure will become law without his signature.

If the measure becomes law, it would mark the biggest local victory for gun control forces since the spurt of organizing following February's school shooting at Marjory Stoneman Douglas High School in Parkland, Florida.