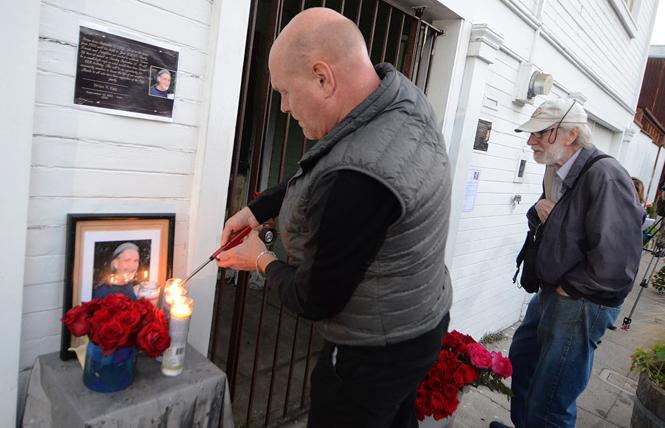 Lee Brandon Espinosa lights a candle in memory of Brian Egg during a vigil outside Egg's home Tuesday, September 11, which would have been Egg's 66th birthday. Photo: Rick Gerharter

A San Francisco police commissioner and a city supervisor are weighing in with concerns about the police handling of the case of Brian Egg, whose headless torso is believed to have been left in a fish tank in his South of Market house.

Egg's neighbors have voiced anger and frustration that their concerns over Egg's disappearance were not taken seriously.

Lesbian San Francisco Police Commissioner Petra DeJesus told the Bay Area Reporter last week that she has questions and concerns about how police handled the investigation and plans to raise them during the commission's regularly scheduled meeting Wednesday evening, September 12. [The meeting is after the print edition of the B.A.R. goes to press.]

DeJesus said she planned to bring a copy of the B.A.R. with her to the meeting to address some of the criticism raised by the paper last week in an editorial, as well as a news article, on the case. She said she wanted to gather as many facts as possible on the case before passing judgment on the actions by police.

"Brian Egg's death is a tragic loss for the LGBTQ community. I believe that his friends, neighbors, and the greater community deserve an explanation as to why the SFPD handled the case in the way that they did," Mandelman wrote in a statement to the B.A.R. "Ultimately, I hope law enforcement can bring justice and closure for his friends and family, and restore a sense of safety to his neighbors."

Egg's home, at 228 Clara Street, is part of District 6, represented by Supervisor Jane Kim. An aide to Kim responded to the B.A.R. Monday, September 10, and asked for a list of questions. No response has been received by press time. San Francisco Police Chief William Scott has not responded to the B.A.R.'s requests for comment.

Friends of Egg's held a vigil in front of his house Tuesday, September 11, which would have been his 66th birthday. Neighbors lit candles and shared photos of Egg, who had once worked as a bartender at the Stud.

Alerted by neighbors
A headless torso was found in a large aquarium in Egg's house August 14. Police discovered the fish tank hidden in the home after searching the house for four days. Neighbors had alerted them after a private crime scene cleanup company showed up at the house. Police say that Lance Silva, 39, had used Egg's credit card to pay for the service. Silva and a man who met the cleanup crew at the house, Robert McCaffrey, 52, were arrested for homicide, but the district attorney's office dropped the charges pending further investigation. McCaffrey was freed but Silva was kept on a parole hold out of Alameda County.

Police say that officers stopped by Egg's house twice in late July after getting calls from concerned neighbors. Officers knocked on the door but left after no one answered. Police say that officers went to the home for a third time August 7 after Egg's sister filed a missing persons report. Again, they knocked on the door and left after no one answered.

Neighbors said they noticed frenetic cleaning in the home after those police checks. Two neighbors told the B.A.R. that they could see soapsuds leaking from the front of the house and that the front door was freshly painted. They believe someone was trying to clean up evidence.

Police said that Egg was last seen in late May or early June. Neighbors say he and his dog, Lucky, were fixtures in the neighborhood. He could often be seen cleaning the stretch of Clara Street, near Fifth and Harrison streets, where he lived for more than 40 years. Neighbors said he was a regular at St. Anthony's Dining Room in the Tenderloin and often invited homeless people he met there to stay with him.

Egg's longtime friend and neighbor, Scot Free, helped rally concerned neighbors through a posting on Nextdoor August 2. Egg's niece, Rachel Egg, posted a photo of Egg with his dog to further assist with helping to find her uncle.

After the discovery of human remains in his home, several neighbors, as well as B.A.R. readers, asked what happened to the dog.

The pet survived the ordeal and is in good condition, according to a neighbor who also volunteers at San Francisco Animal Care and Control.

Pauline Le posted on Nextdoor: "Hi Everyone, I am at ACC right now and everyone has been really helpful. Lucky is in their care and is safe and is part of an investigation, so they can't comment anymore on this. They appreciate everyone's concerns. YAY, and what a relief!!"

Animal Care and Control did not respond to numerous phone calls and emails from the B.A.R.