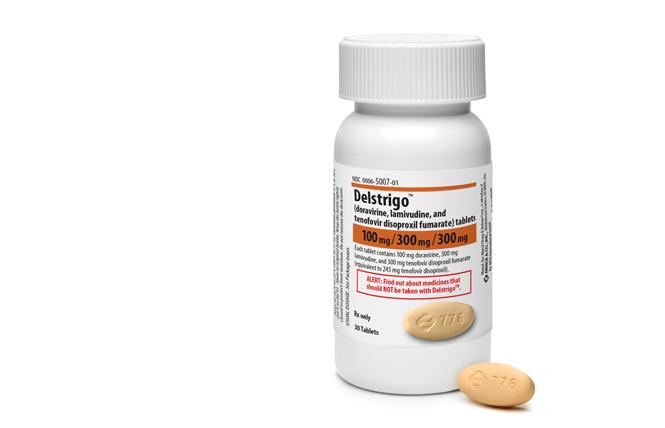 Their developer, Merck, said the drugs should be available in pharmacies within a month. The announcement was made August 30.

Pifeltro is a stand-alone doravirine tablet that must be taken with other antiretroviral drugs. Delstrigo is an all-in-one pill containing doravirine plus tenofovir DF and lamivudine (also known as 3TC). Both are taken once daily with or without food.

Pifeltro and Delstrigo were approved for adults with HIV who are starting treatment for the first time. Delstrigo is currently also being evaluated as a switch option for people who are already on treatment with undetectable viral load, and both medications are being tested in children and adolescents.

"As a result of the remarkable strides made in the fight against HIV, clinicians and their patients have the opportunity to work together to identify treatment regimens that may be best for each individual ... [the] approvals of Delstrigo and Pifeltro provide two new options for the treatment of HIV-1 in appropriate treatment-naive adult patients," Dr. David Wohl of the University of North Carolina at Chapel Hill, one of the researchers who tested the new drugs, said in a Merck news release.

The approvals are supported by Phase 3 clinical trials showing that both treatments are effective and well tolerated.

The DRIVE-FORWARD study included 766 HIV-positive people with no prior treatment experience. They were randomly assigned to take doravirine or boosted darunavir (Prezista), each in combination with tenofovir DF/emtricitabine (Truvada) or abacavir/lamivudine (Epzicom).

As Kathleen Squires of Thomas Jefferson University reported at last year's Conference on Retroviruses and Opportunistic Infections, after 48 weeks on treatment, 84 percent of people taking doravirine, and 80 percent of those taking darunavir, had undetectable viral load, showing that doravirine was non-inferior.

The DRIVE-AHEAD study included 728 previously untreated people who were assigned to take either the Delstrigo pill or the Atripla combo pill containing efavirenz, tenofovir DF, and emtricitabine.

At the International AIDS Society Conference on HIV Science last July, Squires reported that 84 percent of people taking Delstrigo and 81 percent of those taking Atripla had viral suppression at 48 weeks, again showing that doravirine was non-inferior. The two treatments worked about equally well regardless of baseline viral load.

All the regimens were generally safe and well tolerated. However, DRIVE-AHEAD participants who took Delstrigo had fewer neuropsychiatric side effects such as dizziness, sleep problems, abnormal dreams, or altered cognition, and they were about half as likely to stop treatment due to adverse events. In both studies, people taking Pifeltro or Delstrigo saw small declines in their cholesterol and triglyceride levels, while those taking darunavir or Atripla had small increases.

The tenofovir DF in Delstrigo can cause kidney impairment and bone loss in susceptible individuals. For this reason, kidney function should be checked before starting the combo and monitored regularly while using it, researchers said. An updated formulation of tenofovir that's less likely to cause kidney and bone problems (tenofovir alafenamide or TAF) remains under patent by Gilead Sciences and is unavailable for use in other companies' combination pills.

"I think its utility would be better if the drug companies got together and talked, and TAF could be put together with doravirine," Dr. Monica Gandhi of UCSF told the Bay Area Reporter at the IAS conference.

Because tenofovir is also active against hepatitis B, the Delstrigo label includes a warning about worsening liver inflammation if people coinfected with both HIV and hepatitis B virus stop taking the medication.

Merck set the price for Pifeltro, for use with other antiretrovirals, at about $1,400 per month. Delstrigo, a complete regimen, will cost about $2,100 per month. This is in line with the cost of other single-tablet HIV regimens including Gilead's Genvoya and Biktarvy and ViiV Healthcare's Triumeq.

Merck said it would include the new medications in its patient assistance program and the company is working to obtain access for people covered by Medicaid, Medicare, and the AIDS Drug Assistance Programs.