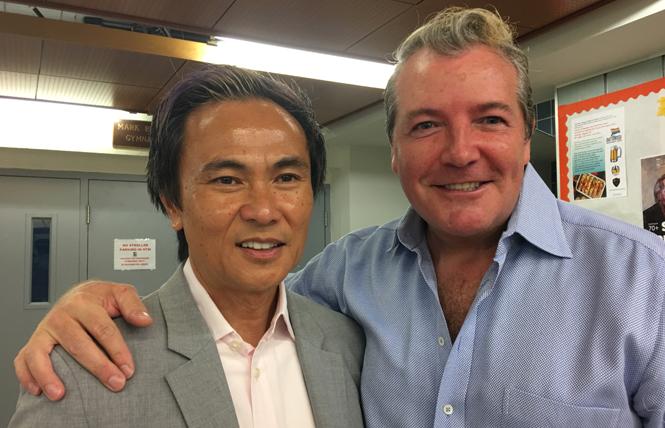 The Castro Merchants gave its unanimous approval to the concept of a new retail cannabis dispensary, Sugar, to be located at 3989 17th Street, adjacent to Jane Warner Plaza.

Earlier this year, the owners of the Wild Card gift shop closed their business at that location after 22 years, citing neighborhood crime and blight.

The merchants association, which voted on Sugar September 6, previously approved another retail cannabis application, Flore Store, to be located at 258 Noe Street, at Market, currently a nail salon.

The merchants' approval is not binding but is part of the process of reaching out to neighborhood organizations for support when Sugar appears before the planning commission for a conditional use permit. When details of their operating plans are finalized, the owners would return to the merchants group, seeking its approval again.

If both applications are approved, the neighborhood would have three places to buy recreational and medicinal pot, joining the Apothecarium at 2029 Market Street, across from Safeway.

None of the stores in the Castro plan to have on-site usage of cannabis.

In a brief interview before the merchants meeting, Sugar co-owner Romwald M. (Ray) Connolly told the Bay Area Reporter that he and his partner, Desmond Morgan, plan to renovate the upper flat, which will become their new home. Connolly said that five years ago, he left his job in the software industry, where he worked for 20 years; Morgan still works in pharmaceutical sales.

In his presentation to the merchants association, Connolly said the couple plan to install four to six cameras on the building's facade, which would capture footage within a 75-100 foot radius of Jane Warner Plaza. The 2,600 square foot store would have a separate section selling cannabis for medicinal use, with trained staff members available for consultations. The earliest the store would open is January, he said.

When asked what the new owners would do to prevent the plaza "from smelling like pot," Connolly said new packaging requirements eliminated any odors from products. He also said that customers would be required to sign in and if they were found to be smoking on the street, which is prohibited by law, they would be banned from shopping there in the future.

The couple had twice attempted to open dispensaries in the city, one near Fisherman's Wharf and one at 2352 Market Street, but both applications were subsequently withdrawn. Connolly did not return repeated emails and text messages for further details on those applications.

The permit application for Sugar in August came several months after Alan and his business partners filed their application to open a retail shop, the Flore Store. Alan also is a partner in Flore, a cafe at Noe and Market streets.

In an interview at Flore, Alan told the B.A.R. that he has "no information" on when the city's cannabis office would act on the application. Once the application is approved, Alan would be required to appear before the planning commission and, if successful, could begin renovation. The new store could be open as early as the first quarter of 2019, he said.

Repeated phone calls and emails to the San Francisco Office of Cannabis for comment were not returned at press time.