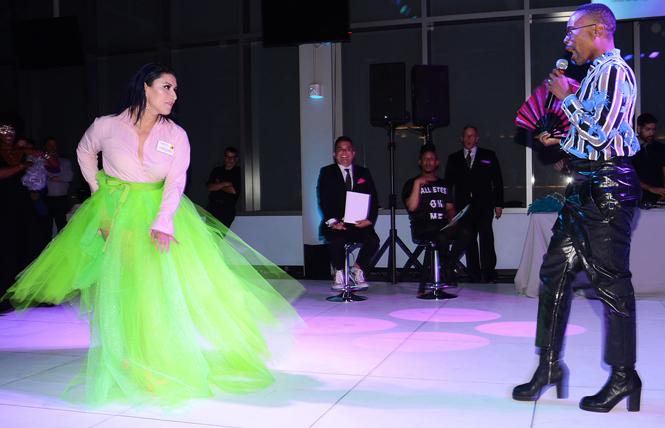 A slice of "Pose" came to San Francisco last weekend, as Billy Porter, a co-star of the hit FX show, presided over a "walk-off" contest that was a highlight of the San Francisco AIDS Foundation's Tribute Celebration.

Jones, a co-founder of SFAF and the award's namesake, made the presentation.

During his acceptance speech, Porter acknowledged his youth, during which he was bullied, and the challenges he faces as a gay African-American performer.

"God has bigger dreams for you than you have for yourself," he said. "The more we speak truth to power, the more we tell our stories, the better the world becomes. We're not going back. I'm done being scared. We survived the AIDS crisis so fuck Trump."

The after-party began after Porter received his award and he hosted the walk-off contest.

Mayor London Breed offered remarks at the gala, and gay state Senator Scott Wiener (D-San Francisco) said she is a "champion" working to bring a safe injection pilot program to the city.

"Mayor Breed has always been there for people in our community and for people with AIDS," Wiener said as he introduced her. "She is a champion to make sure that San Francisco has safe injection sites. She truly leads and is proactive and strong. She's an amazing leader."

Breed took to the stage amid thunderous applause. The main thrust of her speech was regarding the need for safe injection sites, which the city does not have, and clean needle exchanges, which SFAF has operated for decades.

"So many people are hesitant to allow people to shoot up inside," Breed said. "But people are shooting up on our streets and dying. We are in a public health crisis and that's why I'm leading this fight. Safe injection sites are critical for getting to zero."

The mayor was referring to the city's ambitious initiative that would see near zero HIV infections, AIDS death, and HIV/AIDS stigma by 2020.

"Despite the AIDS denialism that affected our nation, San Francisco came together and created a model of care that would bring optimism to so many desperate for a future," he said. "As the San Francisco AIDS Foundation moves toward our fifth decade of service to the community, we remain committed to continuing the legacy of the early responders even though the challenges we confront, although similar, have changed."

Hollendoner noted that the San Francisco Department of Public Health announced last week that there were 221 new HIV diagnoses in the city last year, a 58 percent decline over the past decade. He reiterated the foundation's commitment to getting to zero new infections.

Michael Siever, Ph.D., founder of the Stonewall Project, was recognized with the Community Excellence Award. The Stonewall Project is a family of programs that provides harm reduction-based counseling to gay and trans men who have issues with substance abuse or alcohol. SFAF now operates the program.

Gioia McCarthy, managing director and division executive for Bank of America's Northwest Division, talked about the various actions the bank has implemented in support of people living with AIDS, including one of the earliest known workplace HIV/AIDS policies, after employees contracted the virus.

That policy later served as a model for the Clinton administration's guidelines for federal employees.

Bank employees first joined SFAF's board in 1991 and, in 1994, unveiled an AIDS quilt panel of workers who died of the disease. Employees have raised more than $1 million through AIDS/LifeCycle, the annual bicycle fundraiser SFAF and the LA LGBT Center produce.

"I'm so pleased to accept this award," McCarthy said. "I'm so proud that BofA could be on the forefront of creating policy."

The evening raised $478,282, including donations and proceeds from silent and live auctions.

Randy Moore, 50, attended the gala with his husband, Greg Peters. He told the Bay Area Reporter that he was delighted by the evening.

"We have been active participants in AIDS/LifeCycle for many years and have supported the AIDS foundation and our friends that are board members," Moore said. "It's still important to draw focus to a cause that for many people in the world isn't a hot topic in their personal lives. It's still an epidemic that needs to be eradicated. The evening was beautiful - recognizing Billy Porter was a beautiful moment and, hopefully, the evening brought a great deal of funding to the foundation."