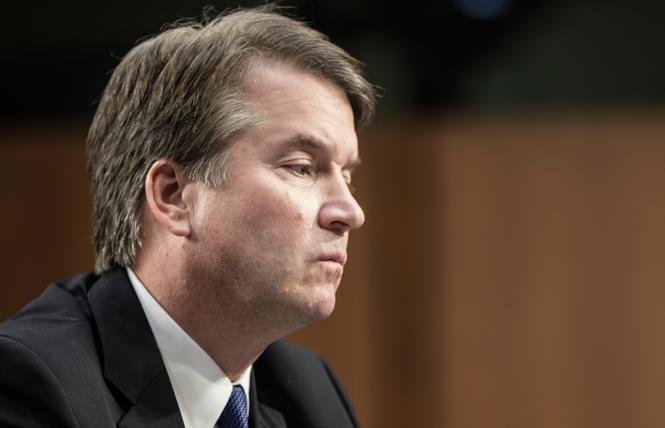 It was the third day of a four-day confirmation hearing for federal Judge Brett Kavanaugh to join the U.S. Supreme Court before a senator really pressed hard for him to account for his commitment to equal rights for LGBT people.

Senator Cory Booker (D-NJ) started off, trying to get Kavanaugh to agree that he wouldn't fire somebody because of the color of that person's skin or their gender.
"Of course," Kavanaugh agreed.

"Would it be wrong to fire somebody ... if the person is, gay?" asked Booker.

Kavanaugh declined to directly answer. "In my workplace, I hire people because of their talents and abilities. ..." The response implied - but did not assert - that sexual orientation would not be a factor for him.

Booker pressed on. He asked whether, as a matter of law, Kavanaugh would "have a legal right to fire someone just because they're gay?"

Kavanaugh said, "The scope of employment discrimination laws is being litigated right now and, therefore, while I'd like to talk to you about this more, because that issue is in a variety of cases right now, it'd be inconsistent. ..."

Booker interrupted to say that some people have "real concerns that, if you get on the court, folks who are married right now really have a fear they will not be able to continue those marital bonds."

Booker then noted that, in a majority of states, an employer can fire someone for posting a picture on social media that indicates they have a same-sex spouse.

He then probed the judge about what personal views Kavanaugh may have expressed about same-sex marriage when he served as staff secretary to President George W. Bush. Bush spoke out in favor of a federal constitutional amendment to ban marriage for same-sex couples.

Earlier in the day, when Senator Dianne Feinstein (D-California) asked Kavanaugh whether he worked to support Bush's pro-life agenda, Kavanaugh responded that he "had to assist him in pursuing those policies" and acknowledged that "some of those things might have crossed my desk. I don't remember specifics." He gave a similar response on the constitutional amendment: "When I was in the White House, that was ... something that [Bush] talked about."

Booker interrupted him again, asking if Kavanaugh, while on the White House staff, "expressed an opinion" about the constitutional amendment or same-sex marriage.

Kavanaugh said that things related to Bush's remarks on the issue "would have crossed my desk. ..."

Noting that many documents related to Kavanaugh's work in the White House between 2001 and 2006 were being withheld by the Bush archive, Booker pressed again: "Did you ever express your opinions about same-sex marriage?" pressed Booker.

"I don't recall," said Kavanaugh. "Of course, at that time, as you are well aware, there has been a ... sea change in attitudes in the United States of America. ..."

Booker pressed again and again for Kavanaugh to say what his attitude about same-sex marriage was at that time. But Kavanaugh dodged each inquiry, saying only that there had been "debate" about the issue in the White House but that he could not "recall" what his opinion had been. Asked what his opinion is "now," Kavanaugh would say only that, "I apply the law. ... The law of the land protects that right, as dictated by the Supreme Court."

No answer is no comfort
That exchange did nothing to quell concerns in the LGBT community that Kavanaugh is an ultra-conservative, maybe even anti-LGBT, jurist who will almost certainly give the Supreme Court's existing four conservative justices the crucial fifth vote they need to rule against the equal rights interests of LGBT people. Nor did a similar exchange with Senator Kamala Harris (D-California). She asked repeatedly whether Kavanaugh thinks the decision to strike state bans on marriage for same-sex couples (Obergefell v. Hodges in 2015) was correctly decided.

Earlier in the hearing, Kavanaugh did not hesitate to call Brown v. Board of Education, which ended segregation of public schools, the "greatest moment in Supreme Court history." Harris echoed that remark, pushing Kavanaugh to express his opinion on Obergefell.

But Kavanaugh continued to evade answering Harris' questions and tried to simply eat up the senator's limited time by recounting the history of retiring Justice Anthony Kennedy's majority opinions in various LGBT-related cases.

Kavanaugh did paraphrase a significant statement in Kennedy's opinion in this year's Masterpiece Cakeshop v. Colorado decision that "the days of discriminating against gay and lesbian Americans, or treating gay and lesbian Americans as inferior in dignity and worth, are over." (In his opinion, Kennedy worded it this way: "Our society has come to the recognition that gay persons and gay couples cannot be treated as social outcasts or as inferior in dignity and worth. For that reason the laws and the Constitution can, and in some instances must, protect them in the exercise of their civil rights.")

"Do you agree with that statement?" asked Harris.

Kavanaugh would not answer the question, stating only that Kennedy's opinion was precedent.

Shannon Minter, legal director for the National Center for Lesbian Rights, called Kavanaugh's "refusal to confirm that Obergefell was correctly decided" as "chilling" and said it "poses an unprecedented threat to the liberty and equality of LGBT people."

"If this nominee cannot so much as affirm [Obergefell] or the fundamental equality of LGBTQ people and our families, he should not and must not be granted a lifetime appointment to our nation's highest court," said Griffin.

An HRC paper on Kavanaugh last month characterized the nominee as a "direct threat to the constitutional rights" of LGBT people and other Americans.

"Judge Kavanaugh's record on reproductive rights, the right to privacy, and religious liberty indicates a potent combination of ideological views that could significantly and unnecessarily reshape constitutional doctrine and nondiscrimination protections as they apply to LGBTQ persons," said the paper. The paper notes that Kavanaugh has frequently cited the late Justice Antonin Scalia, who led the dissent to Obergefell and many anti-LGBT opinions, as one of his legal heroes.

Kavanaugh himself has not participated in an LGBT-specific case in the U.S. Court of Appeals for D.C. But HRC, like Booker, believes he likely does have a record on LGBT issues from his tenure in Bush's White House from 2001 to 2006. HRC's paper on Kavanaugh said "it is reasonable to infer he was involved, given the central function of the White House staff secretary and Kavanaugh's record of participating in so many of the politically consequential decisions of the Bush campaign and first term."

Abortion
Papers that have been released from Kavanaugh's work in the White House have illustrated that his acceptance of Supreme Court precedent in regards to abortion is tenuous. During last week's confirmation hearing, he told Feinstein that the Supreme Court's ruling in abortion rights cases is "precedent." But with the release of some documents from his time in the White House, the public could read that, in 2003, he opined, "I am not sure that all legal scholars refer to Roe as the settled law of the land at the Supreme Court level since court can always overrule its precedent, and three current justices on the court would do so."

One particularly interesting moment during the four-day hearing came when a Republican, Senator Thom Tillis of North Carolina, following on the heels of Booker's questions, looked into the camera - not at Kavanaugh - and said, "Quite honestly, if firing someone because of their gender identification is immoral ... if anybody even suggested it that's ever worked in my organization, they'd get fired before the sun set."

"I've been very passionate about this issue since 1997, when I set up a gay and lesbian recruiting practice at Price Waterhouse. That is becoming the norm," said Tillis. But, he added, "It's on us [presumably referring to Congress] to fix it. It's not on the judge to determine how we're gonna get it done."