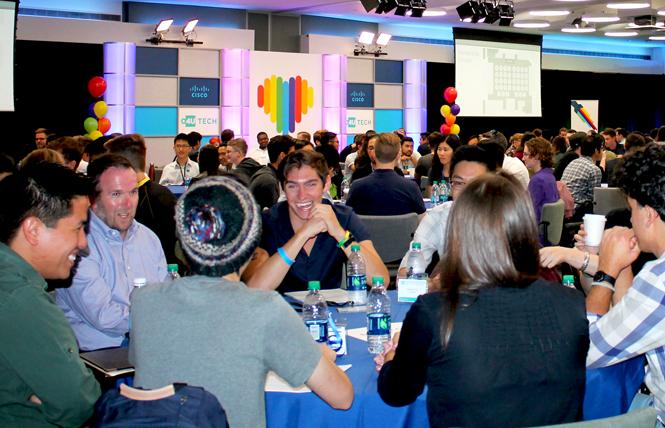 LGBT computer science students from around the country get mentoring by tech leaders at the Out for Undergrad Tech Conference at Cisco Systems in San Jose September 8. Photo: Heather Cassell

The hallways of Cisco Systems in San Jose were buzzing with excitement and ideas as more than 200 students from 93 different colleges across the United States, and a few international students, networked with each other and senior executives from some of Silicon Valley's leading technology firms.

They were there for the Out for Undergrad Tech Conference. During the three-day conference, September 7-9, LGBTQ students learned important career skills from 132 mentors, as well as how to be themselves when entering the workplace.

The goal was not only to find the best and brightest to intern, but also to provide professional and personal support and guidance to the young LGBTQ people about to enter the workforce.
Over the course of the conference students learned about how to be authentically themselves while pursuing their career goals and essential skills, from interviewing to navigating their first professional job.

"The students are amazing. They are just extraordinary human beings. I love just the privilege of hanging out with them," said Cindi Love, a 63-year-old lesbian who is the executive director at Out for Undergrad.

"I have been so impressed with how many employees are here volunteering," she said. "That's been really incredible. I'll never forget it."

Buttoned up for business
Charlie Johnston, senior vice president of human resources at Cisco, cited studies that found 53 percent of LGBT employees across the United States "hide who they are in the workplace," he told the students September 8.

Being closeted in the workplace isn't limited to older generations. In a separate study, Johnston discovered that 62 percent of millennial LGBT graduates go back into the closet when they go into their first job, he said.

"A lot of the statistics Charlie cited were things that I completely related with," said Celine Cuevas, a 25-year-old lesbian who was the volunteer conference lead for the tech conference and a product manager who recently left Redfin for tech startup Juvo.

Coming out in the workplace "was something that even I struggled with," she said.

It didn't matter that she had been out since she was 14 years old and was a leader in LGBT organizations in high school and college.

"During my first internship I felt kind of weird about outing myself because I didn't understand how to do this tactfully," she said.

Oscar Canon, a 38-year-old gay global process manager at Cisco in North Carolina, said entering the workplace can be challenging.

"It's very scary when you leave your school and your surroundings to go to the real life," he said. "How do I continue being myself? What opportunities are going to be there?

Another study Johnston cited showed that 81 percent of non-LGBT respondents feel that LGBT co-workers should be who they are when they come to work.

Yet, that's not always the reality in the real world.

Four years ago, a study by Equal Rights Center and Freedom to Work found that resumes that clued potential employers that a candidate was LGBT received fewer responses than the applicant that didn't indicate any affiliation with the gay community. Openly LGBT interviewees were 23 percent less likely to get an interview than their less qualified heterosexual counterparts, the study found.

She advised the students to live and work in an area with more than two companies to leverage being able to get out of harmful work environments, should they occur. She gave examples of what toxic situations look like and how people can grow into their own self-worth.

Keen stressed the importance of employees knowing their rights and using the right language and providing details when reporting issues to managers and human resources. She advised how not to get into the "loyalty trap" by allowing someone's career to be hindered because they liked their co-workers, bosses, and knowing when it's time to leave a company.

"Take care of your career first," she said.

The company
Knowing that a company embraces its LGBT employees is a big step.

"These companies, they want you and they want you to embrace your full and authentic self - including your LGBTQ identity," said Cuevas.

Michael Lay, a 46-year-old gay man who is the senior human resources manager, inclusion and collaboration communities at Cisco's Office of Inclusion and Collaboration in Atlanta, said embracing all of one's self is important.

"I want you to know that you inspire me and you belong here," said Lay, who was impressed by how articulate and bright the students were and has his eye on a hiring goal from the conference.

"It's not just that there is a bunch of LGBTQ [people] that we're trying to bring and Cisco, [it] is really good talent that happen to be LGBTQ," said Canon, who emigrated to the United States from Colombia 20 years ago to attend college in Colorado. "So, it's a diverse talent that is truly top-notch talent."

"It makes you feel a lot better being in technology and being underrepresented," said Alexis Lake, a 21-year-old black UI/UX major going into her senior year at the University of Illinois at Urbana-Champaign, about the impact of the conference. "You realize there are still people here who are just like you - they are here to help you; they want you to grow."

David Aguilar, 21, a queer student whose family emigrated from El Salvador when he was a child, said, "It's been really nice to have a high concentration of likeminded individuals in one place."

Aguilar is in his senior year studying business administration with a focus on technology at UC Berkeley.

Aguilar particularly appreciated hearing other people's stories and "learning from them and getting their advice on issues that I thought were just my own, but actually were something that were pretty common."

Out for Undergrad, founded in 2004, connects queer college students with out LGBT business leaders in Fortune 50, 100, and 500 companies through four different conferences, like the recent one at Cisco.

More than 1,000 students apply to attend one of the four all-expense-paid conferences centered on business, technology, engineering, and marketing every year, said Love.

Love is the organization's only full-time employee and oversees the little more than $1 million raised this year to bring the students and corporate leaders together, not including her salary.

The 800 students in this year's Out for Undergrad class get the connections and support needed to prepare them to enter the workforce.

Increasing "beyond LGBTQ diversity," at the conference was front and center this year, Cuevas said.

"That was something that was really important to me this year, and I think it will continue both in regard to our admissions and sourcing of students and the programming," she said.

Many of the students participating in the program are also first-generation college students and many are from ethnically- and gender-diverse backgrounds, organizers noted.

"We want to help you to achieve your full potential," said Cuevas. "Let's prepare you in both ways. Let's prepare you for how to be your authentic full-self and also how to ... put your best foot forward with regards to your experience and your skills so you can really shine."

"These are extraordinary individuals," added Love. "It's a highly qualified segment of people. We are putting these amazing human beings in connection with these companies where they can have such an extraordinary impact."

Companies taking the diversity lead
Workplace studies in recent years have indicated that companies with diverse workforces and cultures that support inclusion are more likely to have financial returns that are above their national industry medians, business leaders continue to point out.

Love said the trend for diversity and inclusion has moved out of its siloed departments and programs into the echelon of executives and board members.

She believes openly gay corporate CEOs have made a great impact on the students, but couldn't stress enough the importance of allies.

The company also pulled its conference out of Indiana after the state's former governor, and now vice president, Mike Pence signed the Religious Freedom Restoration Act into law.
Love also recognizes that increasing numbers of women in tech and how it parallels with increasing numbers of LGBT people in tech.

"These are sort of parallel tracks, as you see women advancing in a particular field, we tend to see LGBTQ advancing in the field," she said, "because it's a simultaneous track.
"I think that it's going to open up an enormous opportunity for nonbinary and lesbian identified individuals in tech," Love said.

Cuevas pointed to an oversight in Facebook's photo recognition algorithm that couldn't distinguish between people of different races. The social media platform is used by billions of people.

"This is why it's especially important that there is diversity ... otherwise you end up with a single point of view and it shows in the products that are built," said Cuevas.