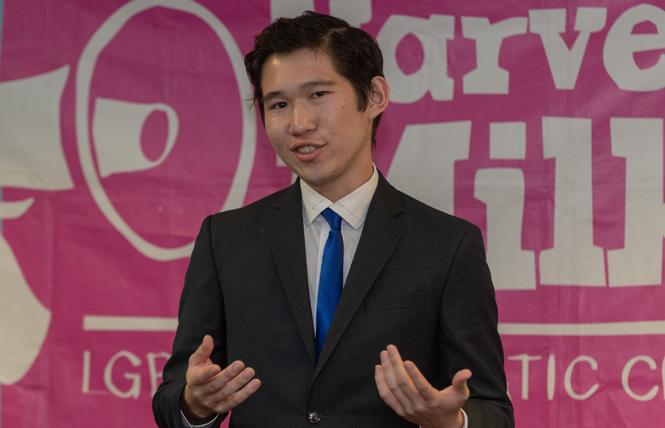 A gay lawyer running for Fremont City Council against a school board member who opposed the teaching of LGBT-inclusive sex education has picked up the support of the Harvey Milk LGBTQ Democratic Club.

Justin Sha, who graduated from UC Hastings College of the Law this year, is one of five candidates running for the open District 4 council seat in the East Bay city. He entered the race in hopes of ensuring that Yang Shao, currently president of the city's school board, doesn't win.

As the Bay Area Reporter noted in May, the Fremont Board of Education voted 3-2 to exclude sex education for elementary school students as well as fourth through sixth graders due to objections over the comprehensive sex-ed program. It did approve the curriculum being taught to seventh through ninth grade students.

In addition to upsetting LGBT advocates and others supportive of seeing the LGBT sex-ed content be taught to all students, Shao has angered the district's teachers. Union members have been protesting Shao and forced him to cancel his council campaign kickoff in June.

In seeking the progressive Milk club's endorsement, Sha told the San Francisco-based LGBTQ political group that he has the best chance of defeating Shao than any of the other candidates in the race.

"I am running for Fremont City Council, District 4 because the current frontrunner, Yang Shao, would otherwise win if I didn't," wrote Sha, who has co-founded three startups, in his response to the Milk club's questionnaire for candidates. "In contrast, I am a gay Chinese-American who is accessible to all segments of my community. I am running out of necessity, and I am a progressive who can win."

The club also endorsed Fremont school board candidate Dianne Jones. The parent of students in the district, Jones is a straight ally who had pressed the school board to adopt the sex-ed curriculum. She is one of seven people running for two school board seats on the fall ballot.

Milk backs candidates in Berkeley, Oakland
The Milk club Tuesday night held a special meeting in Oakland to interview candidates in a number of East Bay races and then vote on whether to support them. Only those candidates who filled out the club's questionnaire were eligible to be considered for an endorsement. Sha and Jones were the only Fremont candidates to apply.

Berkeley City Councilwoman Kate Harrison secured the club's endorsement in her race for a second term. Neither of her two challengers for her District 4 seat, Gregory Magofna, a gay man, and Ben Gould, a sustainability analyst for the City and County of San Francisco, sought the club's support.

In the race for the District 8 seat, lesbian City Councilwoman Lori Droste did not ask Milk to endorse her re-election bid. Two of her challengers did - Planning Commissioner and attorney Mary Kay Lacey and designer Alfred Twu, who is nonbinary - and the club voted to support Lacey.

In the race for the District 7 seat, which is open due to gay City Councilman Kriss Worthington opting not to seek re-election this year, the only candidate to seek, and win, Milk's support was Rigel Robinson. He is Worthington's preferred successor and is fending off fellow candidates Cecilia "Ces" Rosales, a lesbian small business owner, and dog walker Aidan Hill, who is nonbinary and attended UC Berkeley.

The club also endorsed Igor Tregub in the contest for the council's District 1 seat. He was the only candidate in the race to seek Milk's support.

In the race for Oakland mayor, the only candidate to seek Milk's support was Cat Brooks, one of the people challenging Mayor Libby Schaaf this November. A progressive who is an advocate for police reform, Brooks secured the club's endorsement.

Oakland City Councilman Abel Guillén, who identifies as two spirit, had sought Milk's endorsement of his re-election campaign for his District 2 seat. He is one of two out members on the Oakland council, along with lesbian at-large City Councilwoman Rebecca Kaplan, who is not up for re-election this year.

In the race for the District 4 seat, which is open due to Councilwoman Annie Campbell Washington's decision not to seek re-election, the Milk club endorsed Sheng Thao, a single mother who is Kaplan's chief of staff. The only other candidate to seek its support was nonprofit finance professional and documentary filmmaker Pamela Harris, a married lesbian mother who also identifies as bisexual.

The Milk club also endorsed District 6 Councilwoman Desley Brooks in her bid for re-election. Her only opponent to also seek Milk's endorsement was Maria L. "Marlo" Rodriguez, a lesbian who is a registered nurse.

Although Brooks is a controversial leader and beset by legal troubles that have cost Oakland millions of dollars, it is unclear if any of her challengers will defeat her. As the B.A.R. reported last week, Rodriguez is a first-time candidate facing slim chances of winning the race.

While she agrees with that assessment, Rodriquez disputes telling the B.A.R. in an interview about her candidacy that she believes Brooks will be re-elected. In an email after last week's story ran, Rodriquez wrote that, "I do not expect the incumbent to win ... in fact, I am working hard every day until November 6 to make sure that does not happen!"

A former co-chair of the Alice B. Toklas LGBT Democratic Club, Knutzen spent eight years on the San Francisco Human Rights Commission in the late 1990s and early 2000s. Two years ago she supported a local ballot measure that required the city to enhance funding for services targeted to its older adult population.

Knutzen, now retired from her career in legal technology, is married to her partner of 32 years, Fran Kipnis. The couple live in the city's Civic Center area.

Mayor London Breed announced her appointment to the aging commission last week. It is subject to disapproval by the Board of Supervisors.

"I have a lifelong commitment to public service and am thrilled to be able to serve San Francisco," stated Knutzen. "I look forward to working with the staff of the Department of Aging and Adult Services to advocate for model programs that help seniors live a healthy, meaningful and productive life in San Francisco. "

She replaces Gustavo Serina, a gay man who had been serving as the commission's president and is an arts writer for the B.A.R. under the name Tavo Amador. His last meeting overseeing the body was last Wednesday.

Web Extra: For more queer political news, be sure to check http://www.ebar.com Monday mornings for Political Notes, the notebook's online companion. This week's column reported on the candidacy of a lesbian retired lawyer seeking a New Mexico state legislative seat.