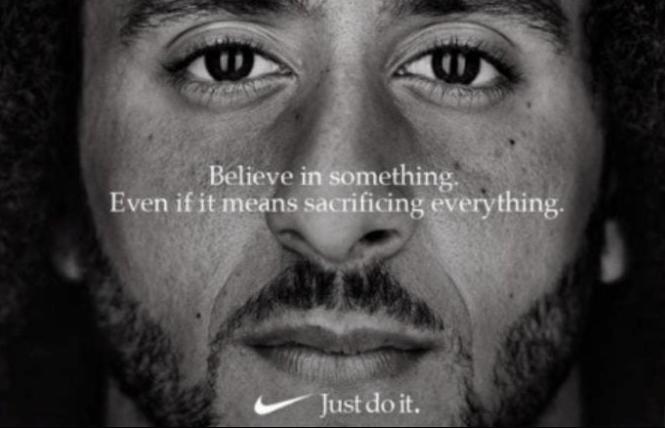 Think we live in confusing times, when even the term "United States" suddenly seems oxymoronic? Consider this: a sneaker manufacturer long dogged by accusations of abusive labor practices decides to pay a few million dollars to an out-of-work athlete (who is suing the National Football League for conspiring to keep him unemployed), using the player to make an advertisement that mentions nothing political or provocative but encourages people to be ambitious and chase their dreams, all of which have historically been values America has prided itself on - and in the wake of that advertisement, a ban on the company's products is called for, universities consider dropping their Nike contracts, the ads are called anti-American ... and the company's already industry-dominating sales rise even more.

Parse that bit of capitalism during your next beer break at halftime.

Last week during a television broadcast of the season opening NFL game, swooshmeister Nike aired a commercial in which former 49ers quarterback Colin Kaepernick's voiceover of a diversity of athletes pushing themselves to overcome incredible adversity urges people to chase their dreams no matter how crazy others say they are. As part of the same ad campaign, Nike published a still close-up of Kaepernick's face (it's so close up that for a split second I thought it was the face of Al Pacino in "Serpico") with the words, "Believe in something. Even if it means sacrificing everything."

No mention of Kaepernick's well publicized protest of kneeling during the playing of the United States' national anthem two years ago. No mention of the racial injustices or violence against African-Americans that were the target of Kaepernick's protest - or that on the advice of a military veteran and fellow football player, Kaepernick had adopted kneeling in place of sitting because he did not wish people to think he was being disrespectful but instead was signaling an ongoing state of distress. No mention of the dozens of fellow athletes who have joined the protests. No mention of the Trumpian backlash on Twitter and at political rallies for the taxpayer-paid vice presidential visit to a football game with the sole purpose of walking out in protest of the protest. No mention of Kaepernick's lawsuit charging the NFL teams of colluding to prevent his continued football employment despite his being a proven highly qualified talent at quarterback in a league aching for qualified quarterbacks.

Just an admonition for individuals to believe in themselves and dedicate themselves to excellence - the values most of us have always thought were some of the things that made America exceptional.

Negative backlash has been swift and predictable.

Almost instantly the internet was inundated with videos of people burning their Nike gear in a form of counterprotest. They were swiftly followed by calls suggesting that people who want to burn their Nikes because they think Kaepernick and the entire anthem protests are disrespectful to the military should instead donate that gear to homeless veterans, and other cheeky calls suggesting they burn their Ford cars and trucks since Ford Motor Co., an NFL sponsor, has been supportive of the players' protests. Largely baseless and speculative rumors flew around the web that major universities would drop their Nike contracts, but as of this writing only Division II College of the Ozarks said it was banning Nike gear and Jerry Falwell's Liberty University said it was considering its options.

In Louisiana, the mayor of Kenner, population of about 67,000, grabbed his 15 minutes of fame by telling his staff he was banning Nike equipment.

"Under no circumstances will any Nike product or product with the Nike logo be purchased for use or delivery at any city of Kenner recreation facility," Mayor Ben Zahn wrote in a staff memo. His attempt to ban the equipment was immediately challenged by members of the city council.

Historically, sales of Nike equipment and sports equipment from other manufacturers fall off around Labor Day weekend and then bound back. Edison Trends reports that last year, Nike's rebound resulted in a 17 percent growth and sales. This year, with the ad and the fires and the videos and the tweets and the epithets? A 31 percent jump.

What's it all mean?

It means that we all still have a long way to go before we can get past the protests and counterprotests, past what we might perceive as the disrespect to servicemen and symbols and what the protesters say the protests are about, which is about making America the more just union we all are supposed to want and enjoy.

I know, I know, the dream sounds crazy, virtually impossible to achieve. Then again, this country was built on commitments to crazy dreams. Wouldn't it be great if we again committed to the crazy dream of working together for, in the words of the Pledge of Allegiance, one nation, "indivisible, with liberty and justice for all"?

Now, how 'bout them Niners!