Transmissions: We are the authors of our lives 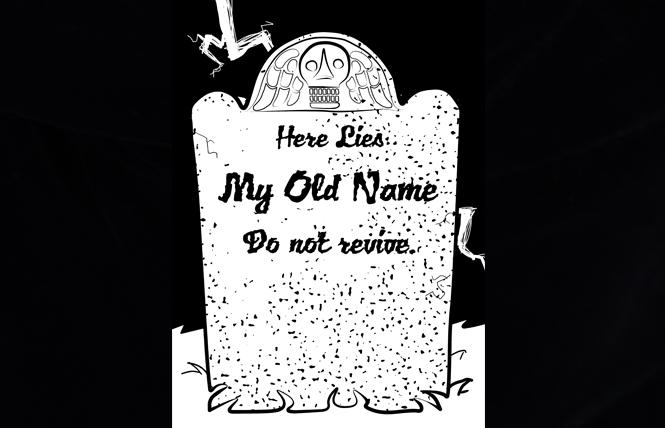 One of the most important things for a trans person is their identity. We live in a world that is constantly, doggedly, trying to strip that away from us. We face pressure over this throughout our lives - and often end up losing that battle after death.

In 1993, a transgender woman by the name of Lauren Diana Wilson took her life. Her family claimed her body, and later held a funeral. From everything I was able to learn about it, she was buried in male clothing, with her hair clipped. Her parents listed her as male and under her birth name - known in trans circles as one's deadname. They kept the event private, so that no one in her life could attend.

Those of us who were her friends held our own memorial, and still do not know where Wilson was laid to rest by a family that did not care for the person she became.

I wish I could say that Wilson's story is an uncommon one, but I have heard all-too-many tales of trans people buried by families under birth names and dressed in attire matching their birth gender. There's also the even bigger issue of newspapers and police reports stripping away the identity of the deceased under the guise of "accuracy."

I recently attended a panel discussion at the NLGJA: The Association of LGBT Journalists' conference in Palm Springs about transgender people, our deadnames - that is, the name we were given at birth and may have long since given up - and obituaries. The panel revealed some of the biases within the nature of obituaries and other reporting on transgender people's deaths.

So often, when a newspaper tells the story of a transgender person after they die, they rely on police reports and immediate family to provide details of a person's life. As you can imagine from the example of Wilson, the story of a trans person's life can be stripped away, with our lived experiences and preferences erased by those who may not have had our best interests in mind.

Likewise, police reports may be only going by available resources: a piece of legal ID, a set of fingerprints, and so on. Reporters may not be privy to the whole story of a transgender person when they report on their passing. This is especially true in the more violent stories that permeate trans society.

When one relies on identity paperwork, one doesn't get a complete story. Many trans people have not been able to change legal paperwork. It can be a costly process, and some localities don't allow a complete change no matter the price.

One of the more intriguing - and frustrating - parts of the overall discussion was the issue of accuracy. That is, if one is telling a complete story of a person's life, should one feel the need to delve into a deadname as well as a gender identity long since dropped?

To me, it becomes an issue of accuracy versus truth. It may indeed be accurate, for example, to include the name I was born under, answered to, and used on legal documents until I was in my early 20s - but this isn't exactly my truth. That surely isn't me, and isn't my identity now. It's not the person who pens these words, or has been under this name and gender for the more than half of this life.

I know it becomes all the more convoluted when a transgender person is also someone notable. I'm sure that a certain Olympian who was the subject of a very public gender transition will have her deadname added to every single obituary the day she passes - all the while knowing that many other celebrities do not see their non-stage names presented in the same way.

Of course, I am mindful that an obituary - indeed much of what happens after one shuffles off their mortal coil - is no longer for the husk of a body left behind, but for those who survive. An obituary is a way to reach out to friends and family, and announce the passing of someone that all these people cared about. In this discussion of obituaries, an argument was put forth: how would someone who knew me in high school know that I passed, given the name in the yearbook is so very different from the one I wear now?

To me, that's largely irrelevant for one big reason: those who knew me then - and who I still may maintain at least a nodding acquaintance - are aware of my transition, and know who I am now. Those who somehow missed the memo are not likely to be the people I would care to know about me alive or dead: that bully from freshman year who is now spending time in San Quentin State Prison, for example.

I'm not sure there's a complete answer, but I do know that if someone was to try and pen what I'd consider a true obituary of a transgender person, it would be just as easy to discuss their transition in language that makes it clear that whatever gender or name they were born with is not the accurate one.

To be trans is to reveal deep inner truths, and shed an erroneous gender assignment. Who we were seen as by others up to a given part of our lives is not the sum of our lives, and, in my opinion, misses the whole point of being transgender in the first place.

We are the authors of our lives, and our identities matter.

Gwen Smith is who she is. You'll find her at www.gwensmith.com.