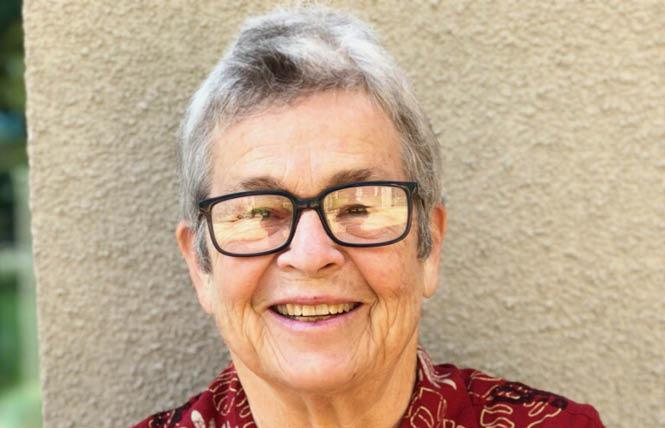 In New Mexico's rural San Juan County in the Four Corners region, Mary "MP" Schildmeyer is doing her part to organize local Democrats and independents into a stronger political force.

The lesbian retired lawyer moved to an unincorporated section of the county in 2009 with her late wife, J Spotted Eagle, who died of cancer last year. Over the years Schildmeyer, 69, became more active in the local Democratic Party, moving up the ranks to be elected last year the local party chair.

"The county I live in, San Juan, is considered a red county. We are working to change that," said Schildmeyer in a recent phone interview with the Bay Area Reporter.

Case in point: the area's incumbent state House of Representatives member, Representative Paul Bandy (R-Aztec), has not had an opponent in 12 years. With no other Democrat willing to oppose him this fall, Schildmeyer decided to run against him for his District 3 seat.

"First of all, it is the year of the woman," she said when asked why she jumped into the race. "Second of all, since I had this recent six year experience with the Democratic Party here in San Juan, I certainly found the need is great."

According to the LGBTQ Victory Fund, the national group that helps elect out candidates across the country, there are currently no LGBT members serving in New Mexico's House of Representatives. It has not endorsed any LGBT candidate running in the state this year.

This is Schildmeyer's first time seeking elective office, and over the summer, she attended a training for female candidates held by Emerge. While the odds of her winning are seen as slim, Schildmeyer believes her campaign is energizing local progressives and others who have felt neglected by their political leaders.

"Statistically, people say I don't have much of a chance. In District 3 there are more registered Republicans than Democrats," Schildmeyer acknowledged. "But there are also 3,000 of what we call decline-to-state voters. I am focusing my campaign on those decline-to-state voters in order to win this race. The party is doing a wonderful job of canvassing registered Democrats."

Schildmeyer, the eldest of five sisters, grew up in Cincinnati until she was 15. Her father, a salesman for Stanley Tools, and her stay-at-home mother then relocated the family to Atlanta.

After college Schildmeyer earned a law degree in 1980 from the John Marshall Law School, now known as John Marshall University, and provided legal services to the local LGBT community and other marginalized groups in Georgia. She was general counsel for the Atlanta Lesbian Feminist Alliance and the National Lesbian Conference, through which she met her wife.

In 1989, she successfully represented Gary Kaupman before a jury in the first AIDS-related probate case in Georgia. In O'Shields v. Kaupman, the family of David O'Shields, a gay man who died from AIDS, sued to invalidate his will, in which he left his entire estate of roughly $200,000 to his friend Kaupman.

She also represented Leigh VanderEls, a lesbian mother and a founder of the former Southern Voice LGBT newspaper, in her custody battle for her son. In 1999, Schildmeyer shuttered her law practice when the couple moved to Missouri.

Once there, Schildmeyer "on a whim" answered a help-wanted ad at an O'Reilly Auto Parts store and landed the job. She became a store manager and was then sent by the company to oversee a location near Albuquerque. When a job opened up at a store in San Juan County, the couple ended up relocating again.

"I never expected to live here," said Schildmeyer. "We fell in love with the area, bought property, and have been here ever since."

One of the bigger cities in the county is Farmington, and three years ago, Schildmeyer founded Farmington NM LGBT Pride Inc. to organize a local LGBT celebration. This past June marked the third annual Farmington LGBT Pride Parade.

"Brace yourself - I know you are from San Francisco - Pride draws 250 people," said Schildmeyer, citing a number that could equal just one contingent in the California city's annual Pride parade.

For the first time this year, Farmington's mayor declared June as Unity Within Diversity Month. It was a compromise measure Schildmeyer helped craft after the mayor's initial refusal to issue a Pride proclamation was met with criticism. The mayor's declaration did mention Pride and its significance to the LGBT community.

"We felt that was a clear victory," she said.

It is an example, said Schildmeyer, of how she can facilitate consensus on controversial issues should she win the House seat.

"I bring to the table an ability to bring disparate groups together and craft solutions that benefit everybody in my district," she said, "and hopefully, everybody in the country as well."

With the area facing a severe drought and upheaval in the local oil and gas sector, a major job creator for the county, Schildmeyer said her sexual orientation isn't much of an issue on the campaign trail.

"No one is asking me about being a lesbian," said Schildmeyer, who has gone by MP since she was a teenager and declined to disclose what the P stood for.

It remains to be seen if she will have an opportunity to debate her opponent, as nothing has been scheduled to date. For now, Schildmeyer is focused on meeting voters throughout the rural district.

"I find it exciting and invigorating," she said of campaigning. "When talking to voters, especially, they tell me, 'You are the first candidate who has ever come to see us, and we have lived here for 40 years.' That is just the way it has been here."