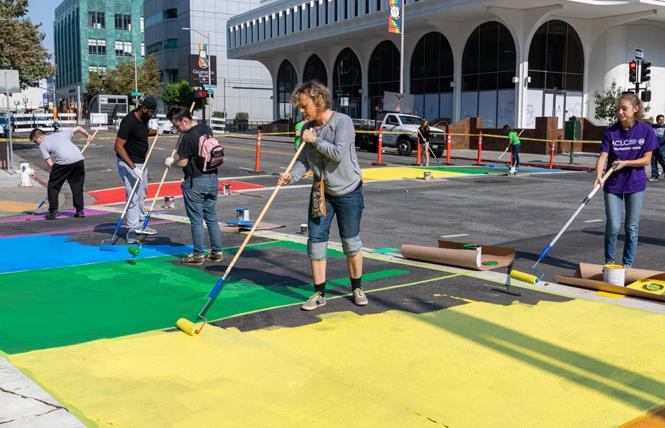 Oakland Pride is back Sunday, September 9, with new additions and a focus on the challenges the LGBT community faces in the East Bay.

"It starts with love. It allows us to be out and proud to be who we are," said Carlos Uribe, co-chair of the Oakland Pride board, in an interview with the Bay Area Reporter. "Community holds us together and allows us to move forward. Resistance is important, including resisting the LGBTQ community being pushed out of Oakland and San Francisco because housing is becoming increasingly unaffordable."

New this year is a pancake breakfast with Oakland Firefighters IAFF Local 55 at 9 a.m. at Frank Ogawa Plaza, at Broadway and 14th streets. For $10 it's all you can eat eggs, pancakes, and sausages with mimosas available for purchase. Proceeds go to Oakland Pride. (For $12, you can get pancakes and non-alcoholic beverages.)

Uribe said the event is being held in hopes of encouraging more people to come out and watch the parade after they enjoy breakfast.

The parade will have over 80 contingents, including groups protesting Costa-Hawkins, a California law that limits rent control, and support for Proposition 10, the November ballot measure that would repeal it.

It's important that this year's Pride bring awareness to the gentrification of the area and the displacement of the LGBT community, particularly of queer and trans people of color, Uribe said.

Pride on TV
For the first time, the parade will be televised. Local broadcaster KOFY TV20 will air coverage of the parade Sunday, September 16, at 7 p.m. on cable channel 713. The program, hosted by Amber Todd, will air again on September 23, also at 7.

There are three grand marshals who will be honored in the parade this year; Brendalynn Goodall, vice president of the East Bay Stonewall Democratic Club, is the legacy grand marshal; Robbie Clark, an Oakland activist and deputy director of Black Futures Lab, is the community grand marshal; and Ivan Garcia is the youth grand marshal.

Other contingents include Congresswoman Barbara Lee (D-Oakland), the Oakland LGBTQ Community Center, which opened last year, and the San Francisco Lesbian/Gay Freedom Band, among many others.

The festival will have over 200 vendors to explore. A new vendor this year is a trans resource booth sponsored by Kaiser Permanente.

"The booth will be there for families and youth who have questions about transitioning or specific questions around gender-nonconforming topics and to provide resources to the community that they may not seek on their own or have means to get," Uribe said.

Festivalgoers will also see a designated teen area for the first time this year. Historically, Oakland Pride has offered an area specifically for LGBT families, but the board felt it was important to provide a space just for teens, Uribe said. Along with activities like video games and access to the nearby skate park, the area will also serve as a resource hub for LGBTQ youth.

The festival has a full entertainment lineup for its four stages. The headliner, Amara La Negra of the TV show "Love and Hip Hop: Miami," is an R&B artist with a Caribbean and Latin American influence.

Also scheduled to perform is Oakland native Tre Edwards, aka Rebel. Previously the musical director of Harlem Gospel 2016 winter tour, Rebel is now pursuing a solo career. His newest album spreads the message that past experiences do not define one's self.
Other performers include rap artist Papi Torre and DJ Kill Bill. Lesbian comedian Marga Gomez will make her debut as Oakland Pride's emcee.

The East Bay's largest LGBT celebration is a Pride "different than any other," Uribe said. He hopes this year will better serve the intersections of the LGBT community, including race and socioeconomic statuses. He also hopes the celebration of Oakland's past resistance movements will help inform the work still to be done.

"At Pride this year we need to resist the national policies and ideologies coming from the current presidential administration and not be taken backward," Uribe said.

General admission to the Oakland Pride festival is $10, and $5 for children under 12. A portion of the admission goes toward Oakland's Pride's Community Partners Program, which has donated nearly $50,000 to LGBT friendly organizations and charities since 2010, according to the Pride website.

The parade is free and open to the public. For more information about the parade and festival, visit https://www.oaklandpride.org/. 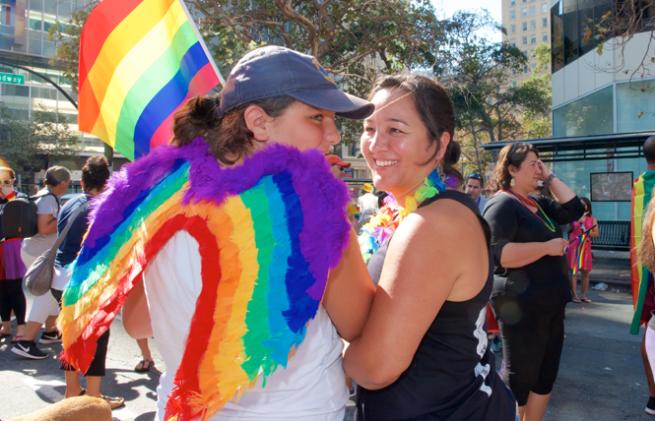 The theme this year is about the importance of voting: "Your Vote. Your Power."

"We're saying you must get out and vote," Goodall said in a recent interview with the B.A.R. "The last few years, we've seen the attack on our community and marginalized individuals. Voting can bring change and is a must."

The guest speaker this year is local preacher, poet, and activist Marvin K. White. White, a gay man, will talk about the impact that informed voting, locally and nationally, has.

The club, now in its 36th year, annually recognizes people and organizations that have advocated for the LGBT community and have made a positive impact in the East Bay.

Six awards will be given out at the breakfast in three different categories; trailblazers, community champions, and new this year, LGBTQI allies.

Being honored in the trailblazer category is Alameda County Superior Court Judge Victoria Kolakowski, the first transgender person elected to a judicial post in the country. (She is the wife of B.A.R. news editor Cynthia Laird.)

"We see her as a tireless advocate for the LGBT community and trailblazer of those who came after her," Goodall said.

A junior at Castlemont High School in East Oakland, Dymond Garrett is also receiving the Trailblazer Award. Garrett is a leader of Youth Alive, whose mission is to prevent violence and create young leaders.

"She has been a tireless local and national voice against gun violence. She's also dedicated to unifying and helping people of color and LGBT youth," Goodall said.

Last in this category is Alyah Baker, a queer woman of color and co-owner of the community-based organization Qulture Collective. Opened in 2015, the queer community center located in downtown Oakland is used for workshops, classes, studio work, and social hangouts for the purpose of being a safe space for queers and allies.

The sole Community Champion Award will go to Ola Osaze, a transmasculine queer, who heads the Black LGBTQIA+ Migrant Project of the Transgender Law Center. The project addresses the ways in which the LGBT community is targeted by the criminal law and immigration enforcement system.

PG&E will also be honored. The electric company was one of the first major companies to support the No on Prop 8 campaign in 2008, which opposed Proposition 8, the ballot measure that banned same-sex marriage in the state of California that was later overturned by the U.S. Supreme Court.

Admission for club members is free, for non-members it's $20 and includes a discounted club membership.

LGBTQ center turns 1
Oakland's LGBTQ Community Center, which opened last year during Pride weekend, will celebrate its first anniversary Friday, September 7. From 1 to 5 p.m. will be events for LGBTQ seniors, followed by an anniversary open house from 5:30 to 7:30, and an anniversary party from 7:30 to midnight. Events will feature the Oakland East Bay Gay Men's Chorus, speakers, Oaktown 8's square dance club, and live musical and drag performances.

The center is located at 3207 Lakeshore Avenue (entrance on Rand Avenue). Donations are welcome. For more information, visit https://www.oaklandlgbtqcenter.org/ and click on "Anniversary."