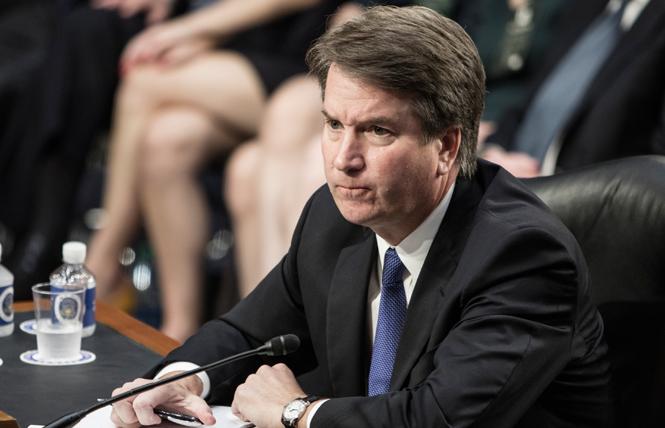 U.S. Supreme Court nominee Brett Kavanaugh had a look of feigned nonchalance on his face as the first protester yelled out during the second day of his confirmation hearing. The nonchalance seemed strained as other protesters, including at least one lesbian, stood up to yell out their opposition to Kavanaugh's confirmation.

The disruptions Wednesday morning were a continuation of the interruptions on the first day of the hearing, Tuesday, September 4, when at least 70 demonstrators were escorted out of the hearing room, one by one, as they yelled out their concerns about President Donald Trump's second nominee to the Supreme Court.

The protesters became a visible and vocal metaphor for efforts by Democrats on the Senate Judiciary Committee and other opponents of the nomination, including LGBT activists. They tried to slow the confirmation process, expressing concern that important information about Kavanaugh's character and commitment to "equality for all" might be gleaned from various documents from his tenure as staff secretary to then-President George W. Bush.

Kavanaugh voiced support for "women's equality" and "equality for all" in his opening remarks and during questioning by senators on Wednesday. But when Kavanaugh enumerated the other categories of discrimination threatening equality for all, he came up with a truncated list: race and ethnicity. And the evidence for his support for women's equality seems primarily based on his hiring of many women law clerks and calling on female students in class when he taught law.

The Bush archive withheld many of the documents from Kavanaugh's work in the Bush White House and, when it did release some documents, it did so only hours before Tuesday's hearing.

But despite the unprecedented protests at the first two days of this week's hearing, the confirmation process for Kavanaugh, a federal judge, had the feel of a fast train charging toward the U.S. Supreme Court with only a perfunctory stop at the Republican-controlled Senate Judiciary Committee hearing. Republicans have the majority on the committee and are clearly ready to recommend Kavanaugh's confirmation to the full Senate. The full Senate, with the appointment of Republican Jon Kyl (Arizona) to the seat left vacant by John McCain's recent death, retains the Republican majority there. The Republican leadership has changed the rules to require only a simple majority to confirm a Supreme Court nominee. And Judiciary Committee Chairman Charles Grassley (R-Iowa) has said the Senate could vote on Kavanaugh's nomination by October 1, the beginning of the Supreme Court term.

On Wednesday, Grassley even instructed Kavanaugh that it would be "inappropriate" for him to answer any questions from senators concerning his opinion on specific cases, and on Tuesday, Grassley ignored long-standing committee rules of procedure. When Senator Richard Blumenthal (D-Connecticut) quoted the rules that would require the chairman to entertain a Democrat motion to adjourn, Grassley essentially asked Blumenthal if he could quote a rule that prevented him from ignoring that rule. Later, when Senator Patrick Leahy (D-Vermont) pressed Kavanaugh on when he knew about "warrantless surveillance" while Kavanaugh was in the White House, Grassley interrupted to announce a new rule to give Kavanaugh time to carefully consider his response to Leahy's questions.

The LGBT resistance
Just days before the start of Kavanaugh's confirmation hearing, Lambda Legal Defense and Education Fund and the Windy City Times filed an expedited Freedom of Information Act request, seeking documents about Kavanaugh's possible involvement in anti-LGBT activities by the Office of Special Counsel. The FOIA request is attempting to determine if Kavanaugh may have been involved in a move by then-Office of Special Counsel Director Scott Bloch to fire or re-locate employees in that office based on their sexual orientation.

Lambda Legal on Tuesday also filed a federal lawsuit against the U.S. Office of Management and Budget, seeking to compel OMB to produce the documents requested in three other FOIA requests submitted in mid-August. The lawsuit states that OMB has not responded to the requests, that the information sought in the FOIAs address an "urgent need to inform the public," and asks the court to intervene.

"Since Donald Trump and Senate Republicans refuse to disclose Judge Kavanaugh's involvement with Bush-era scandals like the reassignment and termination of LGBT workers at the Office of Special Counsel during the time that Kavanaugh served as staff secretary in the Bush White House, we have taken matters into our own hands and have filed a FOIA request to learn the full scope of his involvement," said Sasha J. Buchert, a staff attorney with Lambda Legal. "From what little we know about this notorious purge of LGBT workers, it is evident that senior members of the Bush White House - and likely Brett Kavanaugh - were at the center of the scandal. LGBT people, and all Americans, deserve to fully understand the views and positions taken by a lifetime nominee to the federal bench and Lambda Legal will continue to fight for that transparency."

Lambda Legal, the Human Rights Campaign, and almost 100 other national, state, and local LGBT groups have gone on record, through various letters to the Judiciary Committee, as opposing Kavanaugh's confirmation, in addition to concerns that Kavanaugh would favor the use of religious beliefs to undermine laws prohibiting discrimination against LGBT people.

Protesters are somewhat common at congressional hearings, interrupting to express their views knowing that security guards will quickly escort them out of the room. But the volume and number of interruptions at the first day of Kavanaugh's hearing were much more disruptive than usual.

"This is something I've never gone through before in 15 Supreme Court nominations," said Grassley. It was a sentiment echoed by other Republicans on the committee.

Senator Orrin Hatch (R-Utah) called the audience vocal protests "insolence" and said, "These people shouldn't even be allowed in the room."

Surprisingly, Senator Dianne Feinstein (D-California), the ranking Democrat on the committee, characterized the protests as "a lot of noise" and appeared to thwart the efforts of her Democratic colleagues by launching into her opening statement at Grassley's urging.

Grassley kept pushing the throttle on the committee's agenda, though, by Wednesday morning, he advised Kavanaugh he would let the protesters continue to disrupt the hearing because he was letting "these people have their free speech."

During their opening statements Tuesday, several Democratic senators briefly referred to LGBT rights. Senator Cory Booker (D-New Jersey) evoked the image of civil rights movements by African-Americans, women, and LGBT people to express his concern that the hard won gains of these movements seem to be in jeopardy.

Senator Kamala Harris (D-California) said Kavanaugh's vote on the Supreme Court could decide such things as "whether a gay or transgender worker is treated with dignity or as a second-class citizen." Harris told Kavanaugh that she is concerned he will not treat all Americans equally.

Leahy called Kavanaugh a "political operative" on important issues in the Bush White House and said, "we know those issues include abortion, same-sex marriage, and torture."

Senator Dick Durbin (D-Illinois) said the documents missing from those released about Kavanaugh's years in the White House include a "35-month black hole," during which the Bush White House took a stand against marriage for same-sex couples.

Senator Chris Coons (D-Delaware) said he was concerned Kavanaugh embraces an approach to the law that "would undermine the rights and protections" for millions of Americans, including LGBT Americans."

Kavanaugh's remarks to the committee focused heavily on his family and friends and their support and influence on his life. He said his mother, a judge, "taught me the importance of equality for all Americans - equal rights, equal dignity, and equal justice under the law." He also promised to keep an "open mind in every case." But he was also clear that he believes a judge "must interpret statutes as written ... [and] the Constitution as written, informed by history, and tradition and precedent."

That statement will be read by most to mean that Kavanaugh is not the kind of judge who reads laws in the context of present day realities or sensibilities. Such judges are less likely to say that a law prohibiting discrimination "based on sex" includes discrimination based on sexual orientation. And judges around the country today are being asked to interpret laws, such as Title VII of the Civil Rights Act and Title IX of the Education Amendments Act, to include sexual orientation.

The second day of the confirmation recessed at press time and will continue the rest of the week.