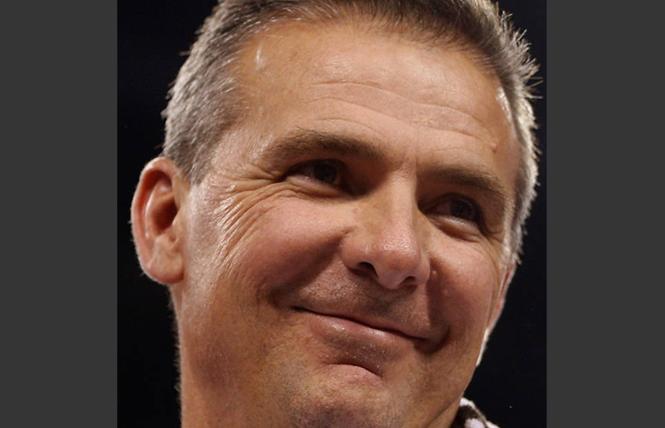 I've often told friends that the vast majority of criminal news about wayward elite male athletes involves abuse of women, abuse of drugs, and possession of guns. But if you want to find the underbelly of a whole other group of inexcusable misbehavior in sports, behavior that illustrates an insular culture of entitlement and invincibility among those paid to oversee athletes, do an internet search for the words "coach" and "suspended." You'll end up needing a shower that would last so long the state would need to re-introduce water rationing.

In years past, household names such as Joe Paterno and Rick Pitino would have topped the search. Currently, Ohio State football coach Urban Meyer tops the list. Mostly known before for national championships and abruptly changing jobs, Meyer was wrist-slapped last month with a three-game suspension by Ohio State after he failed to inform his current employers about an assistant coach's run-ins with the law and failing to act in a timely and decisive way when domestic assault allegations were made against that same assistant coach.

Ohio State trustee Jeffrey Wadsworth resigned in protest over the inadequacy of the suspension.

"You read the report and there's seven or eight things about emails, memory loss, hearing things five times," Wadsworth told the New York Times. "To me, that raised an issue of standards, values - not how many games someone should be suspended for. I felt that getting into a limited number of games that was a suspension missed the point of a bigger cultural concern about, 'What message were we sending?'"

The short length of that suspension and Meyer's failure to acknowledge the victim of the alleged abuse during his staged pseudo mea culpa predictably drew cries of outrage by sports commentators, who lambasted Meyer for his lack of sensitivity and candor, and rebuked the university for placing the championship-trophy chase above its duty to ensure a safe and values-based workplace.

Such commentary is well intentioned as far as it goes, but too often misses the bigger picture, the bigger tragedy. Too quickly it moves from outrage to analysis of how the suspension will effect Ohio State's success in games and whether Meyer will "overcome" this latest adversity.

Which, quite frankly, is misplaced bullshit and is the kind of small-picture thinking that allows continued acceptance of misbehavior as the cost of doing business.

One ESPN commentator said she hopes the upcoming generation of coaches will see how these kinds of abuse incidents and the following cover-ups "have tarnished" the reputations of some famous coaches. Agreed, but a cover-up does not tarnish a coach's image or legacy: a coach who fails in his responsibilities does that himself. A cover-up is not something he stumbles in to: he creates the cover-up and thereby tarnishes himself.

Why is that important? Because, as the recent case of former gymnastics physician Larry Nassar so massively showed, his years of sexual predation was able to plague hundreds of women and was enabled by the inadequacy of coaches and administrators around him. Silent tolerance of the intolerable empowers such evil to exist unchallenged indefinitely, exacting a human cost that can never be repaid.

A good coach, one who educates athletes not just in their craft but who ensures a safe, empowering, and enriching environment in which athletes can flourish and grow as individuals, is invaluable. A coach who abuses athletes verbally, physically or sexually - or who tolerates such actions by colleagues and subordinates - is a crippling and sometimes lethal danger to athletes.

But not all is so bleak. Sometimes the good guys speak out the moment they see abuse.

At the wheelchair basketball world championships last month in Hamburg, Germany, the head coach of the team from China punched the head of one of his players during a timeout in a match with Algeria and continued to berate her and her teammates throughout the timeout.

Stephanie Wheeler, a lesbian coach with the U.S. team, was one of many coaches who immediately protested the abuse.

"This is the most heartbreaking, sickening, and horrific action that I've ever seen from a coach in my wheelchair basketball career," Wheeler wrote on Facebook. "There is absolutely no place for this in our sport! This coach should be banned for life and NEVER coach another game again. As a wheelchair basketball community, we must act so that this doesn't continue!"

"Abusive behaviors from male coaches to female athletes is far more common than we think," the petition says. "Because of the power inequality between coach and athlete, we have seen many scenarios play out that puts athlete well-being at risk. Research shows that women with disabilities are at a much higher risk of facing violence than able-bodied women. Sport should be a safe place for all women and a one-game suspension does nothing to send the message that violence will not be tolerated in our sport. The press release the IWBF sent bent over backwards to not name the action or the perpetrator and appeared concerned with his reputation than with the safety of players."

"Athlete welfare is of paramount importance to everyone at the IPC and the intimidating actions of the Chinese women's coach have absolutely no place whatsoever in the Paralympic movement or in sport as a whole," Xavier Gonzalez, head of the IPC, said. "I encourage them to go further as the current punishment does not adequately address the priority of athlete welfare."

The International Wheelchair Basketball Federation subsequently suspended the coach for the remainder of the tournament.

Now, if you search long and hard on the web, you will learn that the Netherlands beat Great Britain 56-40 for the championship and China fell to Germany 44-43 in the bronze medal match - but you still won't be able to find the name of the suspended coach. Looks like the IWBF still doesn't understand who it really needs to protect anymore than Ohio State does.