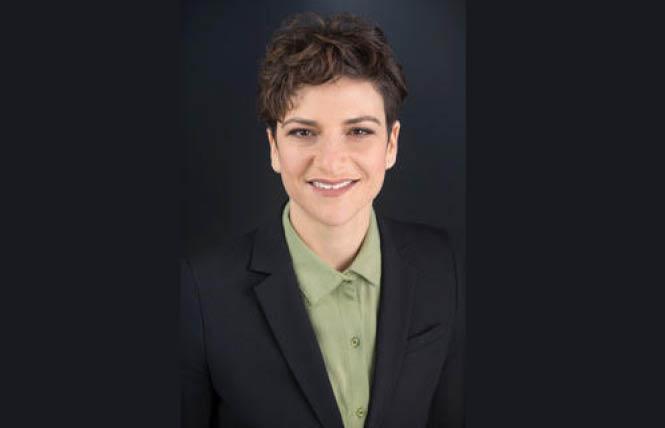 Alice Kessler, a longtime lobbyist for LGBT issues in the state Capitol, is becoming a partner in the Sacramento office of Lighthouse Public Affairs, which was started in San Francisco.

Kessler, 40, a lesbian mom of a 6-year-old daughter, will start her new job Tuesday, September 4. She is leaving the Sacramento-based legislative and regulatory advocacy firm DiMare, Brown, Hicks & Kessler (DBHK), where she had been a managing partner.

She first joined the firm in 2012 as a legislative advocate and within two years was promoted to partner then managing partner. One of her main clients has been Equality California, the statewide LGBT advocacy organization.

Between 2006 and 2010 Kessler was EQCA's in-house lobbyist. She departed to work for Comcast/NBCUniversal handling the media company's government relations in the Bay Area and also joined EQCA's board of directors.

When she relocated to the Sacramento region six years ago to work for DBHK, Kessler became EQCA's outside legislative director. She will continue to serve in that role now that she is with Lighthouse, which also has offices in Oakland, San Rafael, and Palo Alto.

"I am really excited," Kessler told the Bay Area Reporter about the opportunity to help grow the firm's Sacramento office, which opened in early 2018. "I think they have a really great opportunity as a Bay Area firm to grow in the coming years, especially with Newsom likely to come in as governor."

She was referring to former San Francisco mayor and current lieutenant governor Gavin Newsom, widely expected to be elected California's next governor in November. A number of Lighthouse's employees have ties to Newsom or San Francisco City Hall during his mayoral administration.

The third co-founder, Rich Peterson, chaired the finance committee for both of Newsom's mayoral campaigns. The trio of straight married fathers has hired a number of out employees to work for them at Lighthouse.

Gay Sacramento City Councilman Steve Hansen is the firm's of counsel. Matt Dorsey, a gay man who served as the longtime spokesman for San Francisco City Attorney Dennis Herrera, joined Lighthouse as a partner, as did Taylor Jordan, a gay Bar Area native who worked on Newsom's campaign for lieutenant governor.

Kessler will be joining Hansen in the Sacramento office along with partner Holly Fraumeni De Jesús and director Sosan Madanat. In addition to her work for EQCA, she expects to handle women's issues and education concerns.

In a statement to the B.A.R. Hayward said the firm is "proud" to attract someone with the "caliber" and proven leadership skills that Kessler brings.

"Alice is a highly regarded advocate in Sacramento and throughout California. She brings strong relationships, policy expertise, and political savvy that we're confident will help Lighthouse grow in years to come," he stated. "More importantly, we know she'll be key to helping Lighthouse clients succeed from day one. Alice's versatile skills span legislative and administrative advocacy, law, political consulting, and media relations."

In a news release about Kessler's hiring, EQCA Executive Director Rick Zbur stated the agency "is delighted" to continue to work closely with Kessler now that she is with Lighthouse.

"During her 12 years working with Equality California, Alice has developed a reputation as one of the leading advocates for LGBTQ civil rights and social justice in California and nationwide," stated Zbur. "She has helped to pass dozens of groundbreaking bills on the most cutting-edge issues impacting the LGBTQ community and laid the groundwork for progress in state capitols across the country."