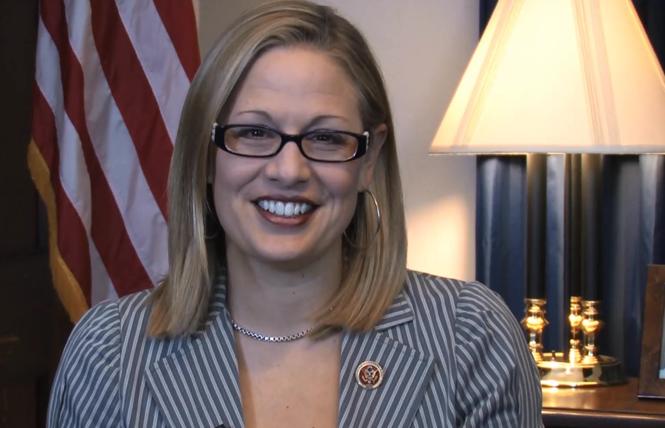 Representative Kyrsten Sinema (D), the first openly bisexual member of Congress, won 82 percent of the vote in her Democratic primary to run for the U.S. Senate seat being vacated by Arizona's Republican Senator Jeff Flake.

Another openly LGBT candidate won her primary bid Tuesday night for a seat in Congress, bringing to 16 the number of LGBT candidates for the U.S. House this year.

Sinema's victory, while widely anticipated, has become a pivotal one for the LGBT community and for Democrats. If she wins in November, Sinema will become the first bisexual elected to the Senate and only the second openly LGBT person to be elected to the Senate. And to win the majority, Democrats must win two seats and retain all their existing seats. Polling indicates that Sinema, a moderate in a heavily Republican state, is the Democrats' best shot at winning a new seat in the Senate.

Sinema's Republican opponent in the general election will be state Senator Martha McSally. McSally stepped up her attacks against Sinema in the days leading up to primary voting, running an ad characterizing Sinema as a left-wing extremist and dredging up a photo of Sinema wearing a pink tutu at an anti-war rally.

McSally told the Arizona Republic that Sinema is attempting to pull off an "extreme makeover" from "her Green Party-pink tutu, proud Prada socialist past. ..." The Republic noted that Sinema's congressional opponents in the past also tried to make use of her former association with the Green Party during Ralph Nader's failed campaign for president in 2000.

The latest newcomer to advance to the general election for a seat in the House is Lauren Baer, a lesbian running for a seat representing the Palm Beach, Florida area. Baer, an attorney and former foreign policy adviser to Secretaries of State Hillary Clinton and John Kerry, won the Democratic nomination to run against incumbent Republican Representative Brian Mast. Baer took 60 percent of the vote over her primary opponent, a former U.S. Navy judge advocate general officer. She and spouse, Emily Meyers, have one child.

Other LGBT candidates on the ballot Tuesday night:

Florida
David Richardson, the state's first openly gay state representative, fell short of winning the Democratic nomination to run for the House seat representing Tallahassee. Richardson came in second in a field of six candidates, winning 27 percent of the vote. Winning the nomination was Donna Shalala, former U.S. Secretary of Health and Human Services under President Clinton, with 30 percent. She seeks to fill the seat being vacated by pro-gay Republican Representative Ileana Ros-Lehtinen.

Gina Sosa, a businesswoman and Log Cabin Republicans member, lost her bid for the Republican nomination for the congressional seat representing the Miami-Dade area. She was one of nine candidates for the GOP nomination. She won less than 2 percent of the vote.

Arizona
Matt Heinz lost his second attempt for a Democratic nomination for Congress.

Daniel Hernandez Jr. easily won the Democratic nomination in his bid for re-election to the state House. Hernandez was a political intern in 2011 in the office of former Congresswoman Gabby Giffords (D) when a gunman shot her and others at a district event. Hernandez was credited with saving Giffords' life when he rushed to her aid during the shooting. Hernandez represents the state House district that covers parts of Pima and Santa Cruz.

Andres Cano appears to have squeaked to victory in the Democratic primary for the state house district that includes parts of Pima.

At press time, Cesar Chavez was tied with another candidate seeking the Democratic nomination to the state House district covering the district west of Phoenix.