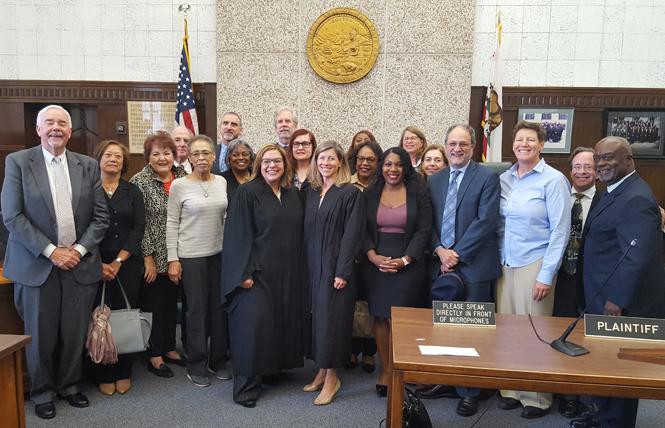 It was packed in a courtroom at the Rene C. Davidson Courthouse in Oakland Friday, August 24, when lesbian former research attorney Bentrish Satarzadeh was publicly sworn in as an Alameda County court commissioner.

Satarzadeh, 41, who earned her law degree from Golden Gate University, was named a commissioner in June. Her first official day on the job, handling traffic cases in Fremont, was Monday, August 27.

"It is quite a juggling act but the best job I have ever had, by far," said Satarzadeh, who lives in Alameda. "I am super excited about it."

"To work with her is a privilege," Colwell said, adding that after several years in the civil division, Satarzadeh went on to assist criminal court judges in a hybrid position combining the two.

Satarzadeh's younger brother, Patrick, spoke of his sister's upbringing. She attended first grade in Iran, second grade in London, third grade in Turlock, fourth grade in Orange County, and fifth grade in San Jose, where the family settled. In short, he told the audience, she had to make new friends regularly.

"She has a really big heart," Patrick Satarzadeh said. "She's also an amazing cook and also has a lot of passion. She is someone I will always look up to."

Superior Court Judge Robert McGuiness, who had Satarzadeh as a research attorney, said, "She has a first-rate analytical mind and a healthy dose of common sense. I believe strongly that this is only the beginning of what is to come in her long career."

Remarking on Gertrude Stein's famous quip about Oakland, "There's no there there," McGuiness said of Satarzadeh, "With you here, there's a lot of there here."

During her remarks, Satarzadeh thanked the court's personnel committee, which recommended that Presiding Judge Wynne Carvill select her for the commissioner's post.

"What an emotional day," she said. "It's like your wedding day, only for the law."

She also thanked her parents, who left everything behind in Iran to come to the U.S. to begin a new life.

Reese Aaron Isbell, emeritus board member of the Alice club who co-chaired the club with Satarzadeh, said he was happy for his friend.

Superior Court Judge Tara Flanagan, a lesbian who won re-election in June, praised Satarzadeh, noting her appointment reflects the diversity of the county.

"I couldn't be happier for Bentrish and the people of Alameda County to have such a legal scholar appointed commissioner," she told the Bay Area Reporter.

"It was a pleasure working with Bentrish as my research attorney, and I am excited that I will get to have her as a colleague as a bench officer," Kolakowski said. "Unlike some attorneys, she knows that the law is not just a collection of abstract concepts - she understands that we deal with real people trying to resolve real problems."
At some point, Satarzadeh would like to become a judge on the East Bay bench. 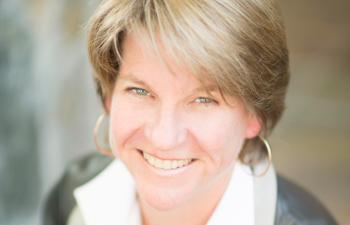 Out candidate seeks San Carlos council seat
Residents of San Carlos could elect the first out female LGBT city council member in San Mateo County if they vote in Laura Parmer-Lohan to a City Council seat this November.

Parmer-Lohan is one of five candidates vying for three open seats on the San Carlos City Council. In an interview with the B.A.R., she said she is part of a rainbow family that includes her wife, Kathy Parmer-Lohan, executive director of the San Carlos Education Foundation, and their two sons, Bradley, 16, and Gregory, 14.

Her youngest son's despair following the election of President Donald Trump in 2016 inspired her to seek public office.

"He was very upset with the way the national dialogue was going and the way people were treating each other," said Parmer-Lohan, 51, the owner of marketing and consulting firm Ruckus Partners. "I did an instant inventory of my life; I am very lucky. Both Kathy and I were able to pursue the career of our choice; our boys are thriving; and we live in an amazing community that is really a strong community that has great schools that have enabled our children to thrive.

"Many other people have gone before me to clear that path," she added. "I felt it was time for me to give back in some way."

She believes her business acumen will be beneficial on the council. Her key focus as a council member will be ensuring all San Carlos residents can thrive regardless of income level. Providing affordable housing options is key, said Parmer-Lohan.

While the city is small in size and has been fully built out, it is seeing redevelopment projects be proposed for various under-utilized properties, particularly along El Camino Real and near its Caltrain station.

"One piece around that is, when new developments come in, we work with developers to identify a number of units that are below-market-rate," said Parmer-Lohan, who favors a project-by-project focus rather than instituting a set percentage for all developers to meet.

Other concerns of hers are providing residents access to affordable child care and seeing that local teachers and safety personnel can afford to live in San Carlos. She favors extending low-interest loans to public employees to use toward a down payment on a home as other cites have done.

"People can't get a salary and afford the types of homes we have available to us," she said, adding that the loan program is one example of "the creative thinking I think we need to employ to ease that challenge for people."

Parmer-Lohan has called San Carlos home the last seven years. She grew up in southern California and moved to the Bay Area in 1989 when she enrolled in UC Santa Cruz, from which she graduated with a degree in theater arts. A youth sports coach, Parmer-Lohan volunteers at the local Chickens Ball, a cabaret-style school fundraiser she has directed skits for and emceed one year.

She is one of two known out city council candidates in San Mateo County this fall. As the B.A.R. has previously reported, Jason Galisatus, 24, is a gay man seeking a council seat in Redwood City, where he grew up.

A co-founder and former president of the Peninsula Stonewall Democrats, Galisatus had told the B.A.R. that there has yet to be an out city council person elected in San Mateo County. Equality California endorsed him Tuesday.

Like Galisatus, it is Parmer-Lohan's first time seeking public office, not counting her bid for president of her sixth grade class. She lost that campaign, joking it may have had something to do with the microphone cutting her off during her stump speech.

She launched her council campaign in June and has enjoyed meeting her neighbors as she knocks on doors seeking their support. A host of elected officials have endorsed her, including gay former Assemblyman Rich Gordon, who also served on the San Mateo County Board of Supervisors, and lesbian outgoing San Mateo County Superintendent of Schools Anne E. Campbell.

"My belief is we all have the same concerns and the same needs," said Parmer-Lohan.

To learn more about Parmer-Lohan's campaign, visit her website at https://lauraforsancarlos.com/.

Election postscript
In the June primary transgender hospice nurse Veronika Fimbres mounted a write-in campaign for governor as a Green Party candidate. The San Francisco resident is believed to be the first known transgender and HIV-positive statewide candidate in the Golden State.
She garnered 62 votes, the majority from northern California voters. Twenty-five people in San Francisco wrote her name on their ballot.

Web Extra: For more queer political news, be sure to check http://www.ebar.com Monday mornings for Political Notes, the notebook's online companion. This week's column reported on the SF Democratic Party snubbing all five LGBT school board candidates running in November.