Guest Opinion: 68 days to save the world: Action=Life 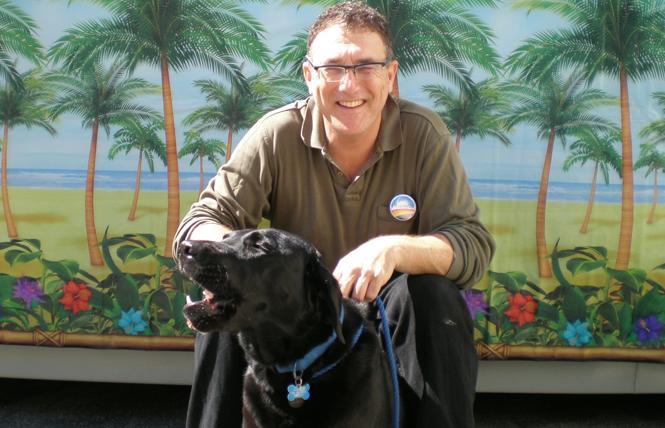 I was appalled to hear a gay man interviewed during this current presidency, or, as I prefer, "residency," who said: "See, he's been in the White House for months and hasn't done away with gay marriage."

If anyone is not alarmed yet by Donald Trump's overt racism, his nativism, his misogyny, his transphobia, his anti-choice imperative, his continuous lying, his destruction of our planet and our global values, and more, then his nomination of Judge Brett Kavanaugh to the U.S. Supreme Court should leave absolutely no doubt.

Late last month, 63 of our LGBTQ legal rights and HIV/AIDS service groups wrote to Senator Charles Grassley (Iowa), the Republican chair of the Senate Judiciary Committee, and to the ranking Democratic member, California Senator Dianne Feinstein. The organizations called the nominee: "an ultra-conservative ideologue. ... After a comprehensive review of Judge Kavanaugh's record, we have concluded that his views on civil rights issues are fundamentally at odds with the notion that LGBT people are entitled to equality, liberty, justice, and dignity under the law."

The letter goes on: "... The stakes for the LGBT community could not be higher in deciding who will replace Justice Anthony Kennedy - who served as the deciding vote in numerous landmark decisions. ... [K]ey LGBT protections are at stake. Judge Kavanaugh's record demonstrates that ... he would provide the fifth and decisive vote to undermine many of our core rights and legal protections."

The five top concerns of our leadership groups: (1) the judge's philosophy with regard to fundamental rights, the concept of liberty in the past 20 years that has led to significant protections for LGBTQ people; (2) his thumb on the scale with regard to religious freedom, providing a sweeping license to discriminate to religious adherents against LGBT people and civil rights protections; (3) the gutting of critical health care protections - including protections against being denied health care for preexisting conditions, like HIV/AIDS, cancer, transgender health, mental health needs, even pregnancy; (4) an improper amount of deference owed to the president, particularly this one; and (5) repeatedly voting against economically vulnerable communities and in favor of the rich and powerful.

Their letter ends: "[o]nly by insisting that Judge Kavanaugh answer these questions will the committee fulfill its responsibility to the American people, and reveal the extent to which his nomination jeopardizes rights and liberties that many Americans believe are secure." You can read the entire letter on www.lambdalegal.org and other similar groups' websites.

Without knowledge of that letter, I, too, wrote to Grassley (copied to Feinstein) last month with my extreme frustration at the extraordinary political machinations regarding this nomination. Using the all-capitalization, bad punctuation vernacular of the current White House occupant, I wrote: "Senator Grassley, I write to ask you NOT to rush the consideration of the current Supreme Court nominee, until after the National Archives provides his complete historic paper files in a COUPLE OF MONTHS. Nonetheless, you are scheduling your hearings to start Sept. 4, long before the records are supplied, so BEFORE the midterm election. This is craven politics, given the OVER 1 YEAR delay that Senator Majority Leader Mitch McConnell imposed WITHOUT ANY consideration of President Barack Obama's nominee to the same court, in order to wait until AFTER the 2016 presidential election.

"Think about how obviously inconsistent this is, and how clearly the play of a party in power that will stop at NOTHING to get its results, rather than respect and strengthen the American form of government by comity and fair play and respect for fair consideration of the opposing points of view with whom one disagrees. Senator Grassley, I encourage you to consider your own legacy, when this bizarre (at least) presidential administration ends. I wonder why you are rushing consideration of a nomination from a President who we know was elected with foreign enemy government help, we just don't know the degree of his active cooperation, but soon may."

My letter ended: "Or is that another reason you rush?"

Silence = Death is what our opponents counted on 30 years ago - and count on now - that we will give up by disengaging. That rallying slogan during our fight for people with HIV/AIDS expanded to include "Action = Life." So now, what will you do? My five suggestions follow. Many involve electoral politics that I can say as a former national board co-chair of Lambda Legal Defense and Education Fund, while it cannot due to its nonprofit statuses.

(1) Have you given enough of your money to the midterm congressional elections that are less than 70 days away? If not, you can start with giving money right now to any of the Democratic challengers identified on http://www.flipthe14.com or http://www.swingleft.org.

(2) Have you given your time to those same elections? If not, those same groups, and http://www.sisterdistrict.org, have mobilized thousands of volunteers throughout blue California to phone into, or even walk precincts in, the so-called purple districts of California's Central Valley and elsewhere nationally. (Modesto is less than two hours away from the Bay Area.)

(3) Have you given your money to support enough of the 63 LGBT and HIV/AIDS organizations? Less than 5 percent of us do. All are listed on http://www.lambdalegal.org.

(4) Who do you know in swing states? Alaska, Arizona, Maine, Nevada; maybe Indiana, Montana, North Dakota, Ohio, Texas, West Virginia, and Missouri. Ask them to contact their senators about Kavanaugh, and then work to elect Democratic senators there, because a President Pence is perhaps an even more frightening prospect. We will need to keep fighting long term.

(5) Finally, share with your friends what you are doing now to make change. It is exactly what we did as a community to defeat California's Briggs initiative, which sought to exclude gay teachers from all public school classrooms, in 1978. This is, for each of us, our moment as members of a group of thoughtful, committed citizens to change the world, because as Margaret Mead said, we are the only ones that ever have.

In addition to being a former co-chair of the national board of Lambda Legal, Charlie Spiegel's law practice in San Francisco and the East Bay covers prenuptial planning and agreements, adoption and surrogacy, real estate, and divorce mediation for LGBTQ and straight people. He is co-hosting a September 9 Noe Valley fundraiser for Democratic Congressional candidate Josh Harder (CA-10). For more information, visit https://bit.ly/2w9xgeZ.