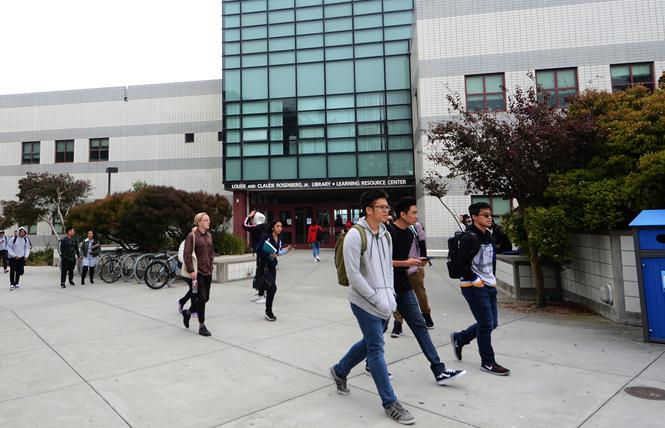 Last year, LGBT students were required to be included in all California community college equity plans for the first time, but City College of San Francisco seems to have not made much headway.

The legislation, Assembly Bill 1018, signed by Governor Jerry Brown, required that LGBT and homeless students be included in the colleges' equity plans they are required to develop in order to receive Student Success Funding from the state.

City College of San Francisco's 2015 equity plan outlined ways it is serving LGBT students, but it has not released its most recent equity plan to the Bay Area Reporter. Community colleges are required to provide an equity plan every three years to the California Community Colleges Chancellor's office.

The extent of LGBT students mentioned in the college's 2015 equity plan includes the Queer Resource Center, counseling services, and its Queer Studies Program and correlating textbooks. The college is not required to submit its next equity plan until the 2019-2020 fiscal year.

The college would not make anyone available to speak with the B.A.R. Instead, it provided a statement from its Student Equity Team.

"Our teams are analyzing the most up-to-date data and working to identify impact related to LGBTQ+ students, as well as homeless students, with the goal to allocate pertinent resources that target the specific needs for the students," read a statement from City College's Student Equity Team in an email to the B.A.R.

Tom Temprano, a gay man who sits on the City College board, said it's important that the college identify more specifically what the needs of the LGBT students are on campus, though he feels the college is "ahead of the curve," in terms of serving the LGBT population. Temprano mentioned the board has not been given an update on the college's equity plan since last year and that he looks forward to knowing where it stands in addressing the needs of the LGBT students on campus.

Referring to the equity plan, he said, it's important to consider the intersectionality of the college's LGBT students, including homeless LGBT and undocumented students. In San Francisco, nearly one-third of the homeless population identifies as LGBT.

"It's important to continue to identify additional resources we can target toward LGBT students, with an emphasis on housing insecurity and the undocumented queer students," Temprano said in an interview with the B.A.R.

Temprano would also like to see the Queer Resource Center, located at the college's Ocean Campus, be open all year. Currently, the center closes during the summer semester. He also mentioned the possibility of opening another LGBT resource center on a different City College campus.

The summer closing of the Queer Resource Center sparked outrage among some LGBT students on campus after the death of 22-year-old transgender student Daine Grey, who killed himself in July. Grey frequently attended the center. After his death, the center was open for a couple of weeks to assist students.

Some students said they have been fighting for more resources for the LGBT community on campus for a long time and say LGBT bullying on campus is a frequent occurrence. Lady Katerina, a City College student and lab technician at the Queer Resource Center, told the B.A.R. the resource center doesn't receive enough funding to adequately serve its students. The center's budget is handled by the Associated Student Council, whose own budget is reliant on a $5, one-time fee that students pay when they register.

"We should have funding to take care of our students," Lady Katerina, 36, who identifies as pansexual, intersex, and two spirit, said. "According to administrators, we have to get approval for every fundraiser we do outside of school and we keep getting roadblocks. Too many rules make it almost impossible to do anything to actually benefit our students in a great way."

Lady Katerina would also like to see more transitional resources, particularly for trans students, like professional development skills, getting help to secure a job, and financial management. Leadership summits, empowerment training, and self-defense classes are among the thing she feels the LGBT community is in need of on campus.

Another student who also works at the Queer Resource Center is Angelica Campos, 22, who chose not to state how she identifies. Campos said the closing of the resource center during summer semester is a "major problem."

"They can't fund it all on their own," Campos said, referring to the Associated Student Council. "There's definitely an uproar that there needs to be more funding. The administration needs to contribute more."

She said LGBT students want an LGBT-specific counselor to be available at the resource center. There is currently an LGBT counselor at the college's health center, but Campos said LGBT students are sometimes afraid or ashamed going to the health center to see a mental health specialist. At the resource center, students would feel safer seeking mental health services, she said. She would also like to see more partnerships between the college and LGBT organizations like the San Francisco LGBT Community Center.

Some progress
The college has taken some steps to help meet the needs of LGBT students on campus. It implemented a chosen name policy last year that allows transgender students to have their preferred names appear on class rosters, emails, online courses, and hopefully, in the future, student ID cards.

Years ago, City College was also the first institution to develop a queer studies department in the United States, according to its website.

Last September was the first time that City College, and all California community colleges, received more extensive data on their LGBT students, which may influence the amount of funding dedicated to LGBT students in future equity plans, according to Rhonda Mohr, vice chancellor for the California Community Colleges Chancellor's office. Last year, Mohr attended an LGBT summit focused on how to expand campus resources for LGBT students held at UC Riverside.

"At the summit, the biggest need was getting the data available to the colleges," Mohr said. "Closing the achievement gap is really about setting up the data in the system to allow us to start measuring aggregated achievement."

"If research behind the equity plan discovers that the LGBT population is not getting a higher success rate, the colleges might use equity funding to provide an LGBT resource center or use it to educate other student populations about the LGBT community," she said.

For any student applying for community college in California, their application is run through a system in the California Community College's Chancellor's office that aggregates data from those applications to then be distributed back to the community colleges. A question regarding LGBT identity was added in response to the Equality and Equal Access in Higher Education Act of 2011. The act requires community colleges to adopt and publish policies on harassment, intimidation, and bullying along with the designation of an employee at each respective campus as a point of contact to address the needs of LGBT faculty, staff, and students.

The Student Success Funding for fiscal years 2018-19 for community colleges was $175 million, the same as it was last year. This is because the state consolidated the funding of three programs including: Student Success Funding, Student Equity Program, and Basic Skills Initiative, to make the new Student Equity Achievement Program. The state is still configuring its allocation due to the consolidation so distributed the same amount of equity funding to the colleges, according to Mohr.

The colleges are required to submit a full equity plan to the California Community Colleges Chancellor's office in the 2019-2020 fiscal year, although due to lack of resources, Mohr doesn't see that continuing in the future.

"I don't see us requiring the colleges to submit full plans to us anymore. We don't have resources to review them," she said.