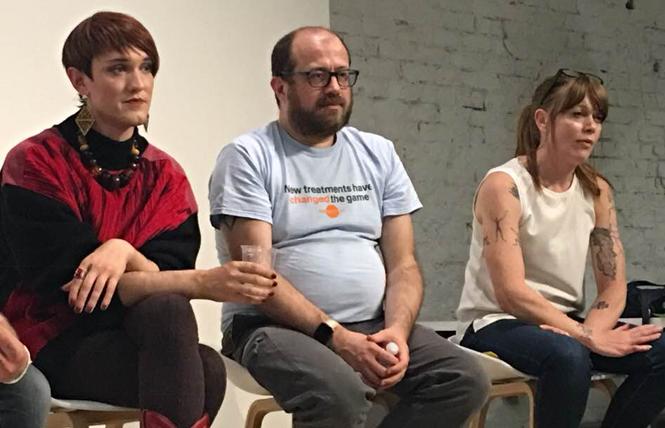 The state Senate Tuesday approved a bill that would allow San Francisco to open safe injection sites under a three-year pilot program, and last week a panel of advocates talked about ways residents can help injection drug users until such a project is implemented.

Supervised injection sites allow people to use drugs under the watch of trained staff, reducing the risk of overdose deaths.

The city is behind the idea. Last month, Mayor London Breed and members of Glide Memorial Methodist Church announced plans to open a supervised injection facility demonstration project called Safer Inside in the Tenderloin. Drug injection at the site will not be permitted during the four-day project, set for August 28-31.

"I am excited that AB 186 has passed the state Senate," Breed said in a statement Tuesday.

The bill's passage is a reversal from last year, when it fell just short of passage.

A panel of five experts at a San Francisco AIDS Foundation-sponsored discussion August 16 at Zendesk was unanimous in its support of supervised injection sites.

Such facilities would provide sterile needles, preventing transmission of HIV and hepatitis B and C, reduce street-based drug use and improper syringe disposal, as well as offer clients an entry point for seeking addiction treatment and medical care. There are currently about 100 safe injection sites in 11 countries, including Canada, the Netherlands, and Australia.

Until a legislative remedy opens the door for permanent sites to open, the panelists offered practical suggestions that might alleviate the situation until a permanent system is in place.

Several panelists pinned the blame for shooting up in public on the city's rapid real estate development, with new buildings constructed in spaces where addicts previously used to inject out of sight of residents. Other root causes of public drug use are housing insecurity, the availability of illicit drugs, poverty, and lack of access to health care services and substance abuse treatment, they said.

Maurice Byrd, a psychotherapist with the Harm Reduction Therapy Center, believes that "housing people first" would be the best approach. Acknowledging the difficulties of finding housing for people with serious mental health issues or those who have experienced trauma, Byrd cited a Kaiser study that indicated that people who had suffered trauma were some 4,600 times more likely to become injection drug users.

Byrd said providing help for substance abusers is complicated by "traditional" models that encourage addicts to resolve their substance abuse before getting medical help. But when a patient goes for drug treatment, the counselor often suggests he get help for his medical issues first. Byrd believes in "radical inclusion," which means that "anyone who walks through the door" gets services.

Terry Morris, director of syringe access and disposal services at SFAF, said that real estate development has led an increasing number of the city's 7,500 homeless people to live unsheltered on the streets. A recent study indicated that 4,000 people are currently living in tents.

With only one shelter bed available for every six homeless people in the city, the issue is further complicated by the policy of shelters to forbid residents to bring Narcan - a narcotic used to treat drug overdoses - into the shelters, increasing the likelihood of fatalities.

Activist Kyle Barker, a board member of the drug users union, pointed out that calling the police to report someone shooting up "can make matters worse." Instead, said Barker, people should consider engaging the person in conversation.

"Most of us don't bite. We're humans and we've been through a lot," he said.

"I hate walking over needles" as much as anyone, said Barker. "It's annoying as hell. But calling the police" is not the solution.

Panelist Pierre-Cedric Crouch, Ph.D., director of nursing at SFAF, said that the police do not have proper training to help people shooting up on the street. While the police may call an ambulance to take someone to a hospital, where they'll "give you an IV," it is likely that the person will be back on the street, without getting proper services.

Crouch suggested that drug users "be reached in places where they are comfortable" because "traditional models aren't working," he said. People using drugs often don't come in for appointments on time and, when they do come in, they may feel shame and stigma because they haven't showered.

"And just going to get your blood drawn can be traumatic" for a drug user, he said.

Asking people who may have their belongings stolen every night to bring in paperwork and identification "is ridiculous," he said.

Supervised injection sites could overcome these problems. When people come in for a place to use clean needles, they can be asked if they'd like to speak to someone about other health problems at the same time, he said.

"We have to come up with ways to make it easy" to receive care, Crouch said.