Asian LGBT activists speak about their movements in SF 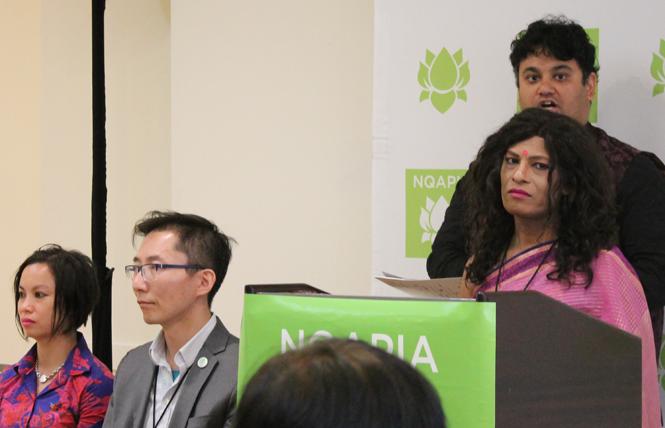 Chinese gay activist Kevin Lin boldly stated that "China is coming out," at the recent conference of LGBT Asians and Pacific Islanders in San Francisco.

Lin, from PFLAG China, was one of several panelists who spoke at a news conference during the National Queer Asian Pacific Islander Alliance conference at the end of July.

Asia appears to be at a turning point as some countries, such as Indonesia and Malaysia, lean backward to remain on solid conservative ground, while others are taking small steps forward progressing into the future toward LGBT rights.

The Indonesian government has led a crackdown on LGBT people for the past couple of years and authorities have been torturing gay men and transgender individuals, particularly in the Aceh province. Neighboring Malaysia hasn't taken quite as drastic actions but is closely following suit.

The activists said they closely watch what's happening in their individual countries as they push forward for acceptance and legal recognition. A win for one country is a win for all of Asia, they said.

However, they all acknowledged that they have a long way to go to reach equality because Asia is socially conservative. Only a few countries are starting to see changes with laws protecting LGBT rights. Many mentioned recent high court wins: in Hong Kong, a court ruled to protect married binational same-sex couples; in Japan, small steps have been taken in some municipalities toward civil unions; in Taiwan, a court ruled same-sex couples have the right to marry under the constitution.

Yet, for the most part, many countries don't have any laws against or protecting LGBT people, the activists said. Discrimination is widely practiced in schools, workplaces, and families. There are few, if any, social service programs for LGBT people or organizations to help families cope with coming to acceptance of their queer children.

Malaysian activist Thilaga Sulathireh of Justice for Sisters explained that in 2008 her country passed a law banning cross-dressing, essentially criminalizing transgender individuals. Under the law, 746 people have been arrested as of 2012. A Malaysian appellate court declared the law, known as Section 66, unconstitutional in 2014, but a year later a federal court overturned the decision on a technicality. The case prompted a constitutional review, which slowed arbitrary arrests of transgender individuals but shifted anti-gay opponents' focus on conversion therapy, which has become popular.

Attitudes toward LGBT people in Malaysia have been codified into law since the colonial era when the British enacted Section 377, the same law used to criminalize homosexuality in many former colonies.

"Sharia laws administered at the state level have limited jurisdiction and they only apply to Muslim persons, however, the laws have an overarching impact of all persons regardless of a villager's background or ethnicity," said Sulathireh.

In Bangladesh, the country legally recognizes the third gender, but not without serious complications.

"In 2013, activists' organizations, like us, were finally able to win a great victory when the government finally recognized the third gender as a legitimate gender," Joya Sikder of New Bridge of Relationships said, speaking with the assistance of a translator.

"However, this victory was short lived because it was done without consideration of how to define the third gender," she added.

Similar to India's law legally recognizing transgender individuals, Bangladesh's law includes employment opportunities specifically for the transgender community in the government. However, few have been able to take advantage of those. The same law that offers employment doesn't recognize the necessity for transgender individuals to update their government-issued documents to reflect their new chosen name and gender. Their pasts are essentially erased without credit for their accomplishments, rendering individuals like Sikder illiterate, despite being educated.

Forty people were accepted for the available jobs, but 14 of the applicants during the screening process were accused of faking their transgender status due to the lack of a clear definition of gender non-conforming individuals, Sikder said.

"None of the people got the jobs. In fact, even one person was threatened with jail time for defrauding the government," she said.

Sikder is working on correcting and improving the law as well as other projects.

Hope
Despite the challenges they face and fear of being so visible fighting for LGBT rights, the activists all expressed hope for the future.

"China is coming out because we don't want to hide anymore. So, together we can create a new world," said Lin. "Action brings infinite possibilities."

She pointed out the necessity of working with other social justice movements and the importance of global LGBT support.

"We need to be intersectional in the way that we build our coalition," said Sulathireh.

Report highlights dangers of LGBT organizations
During the past several years, LGBT activists around the world have experienced an intense crackdown and large-scale arrests, yet a much quieter and potentially more dangerous phenomenon has also been occurring, according to a new report by OutRight Action International.

Earlier this month, the global LGBT rights organization published "The Global State of LGBTI Organizing: The Right to Register." The 60-page report included an examination of thousands of organizations across five global regions to determine the status of 864 groups in Asia and the Pacific, the Caribbean, Eastern Europe, the Middle East and North Africa, and sub-Saharan Africa. Researchers also examined non-governmental registration laws in 41 countries and worked directly with 22 organizations and provided in-depth case studies in Belize, China, Germany, Lebanon, Nigeria, Russia, St. Lucia, Singapore, Tanzania, and Tunisia.

Depending on the environment in a particular country, "if stating that the organization is serving LGBTI people poses a risk of closure they will avoid using these population terms to describe their work or the services they provide," wrote Felicity Daly, the report's author and global research coordinator at OutRight Action International, in an email to the Bay Area Reporter.

Instead, organizations will use terms, such as "HIV," "key populations," "diversity," or "minority," to vaguely signal that they provide services for LGBT people, Daly said.

The inability to legally register an organization as LGBT or openly provide services to queer people cripples the LGBT community and movement, the report stated. It forces LGBT groups to operate under a broader umbrella of human rights or other issues, register and operate as a business rather than a non-governmental organization, or in clandestine circumstances, researchers wrote.

Daly stated that the study's findings demonstrated that alternatives for groups working on LGBT issues weren't always sustainable, were less safe, and less likely to have the financial support necessary to provide services.

"It is essential that civil society is able to create, maintain, sustain, and legally operate organizations that provide programs that enhance the well-being of LGBTIQ people and serve as platforms for advocacy that protects the human rights of LGBTIQ people," wrote Daly. "The needs in LGBTIQ communities are considerable and often the state is ignorant of the issues, turns a blind eye or actively persecutes LGBTIQ people."

A prime example is the situation in Singapore, where LGBT organizations were told they were "against national interest." They were threatened that if they continued to meet they were breaking the law by creating an "illegal gathering." In the past, an "illegal gathering" meant more than a group of four people, but now the law is more than one person and it's up to the government, wrote lesbian activist Jean Chong, program field coordinator at OutRight Action International and founder of Sayoni in Singapore, in an email interview with the B.A.R.

She and other activists have received verbal threats from the public online and even sometimes in person. Authorities use different tactics, such as "monitoring you when your activities are offline, police presence, censorship laws and other laws are used against you to stop organizing," she wrote.

By being able to legally register her organization, Chong believes it will place it in a "better position to do longer term advocacy work" such as gathering data, lobbying, and writing policy papers, which are all "resource intensive."

Operating from afar
While the researchers were aware of some organizations being managed from outside of their home country for safety reasons, they didn't include these organizations in the report's data collection because the organizations are usually not registered directly within the home country.

"We know there are a number of such organizations operating from abroad to provide support to LGBTIQ people in countries including: Ethiopia, Iraq, Iran and Syria," wrote Daly.

"OutRight has been providing support to such organizations for many years," she added. "We do so usually because this is the only way to reach incredibly marginalized populations in very unsafe settings."

Daly noted that many of these organizations want conditions to change so the work can be done locally.

The report revealed regions most severely affected are in Asia and the Pacific, the Middle East, North Africa, and sub-Saharan Africa where LGBT organizations do not have any right to legally register. In these areas, researchers also discovered that organizations operate covertly on LGBT issues using neutral language about services rather than explicitly stating they serve queer individuals.

Researchers expressed concern that in countries in these regions that ban LGBT organizations from registering it leaves the community at higher risk of discrimination and violence.

Daly hopes the report provides greater understanding of the barriers LGBT organizations face; increases knowledge of registration trends and the legal context and the survival skills utilized by LGBT community leaders; and that it will provide greater insight to government donors and private philanthropies working with unregistered organizations.