School board candidate under fire for past anti-trans comments 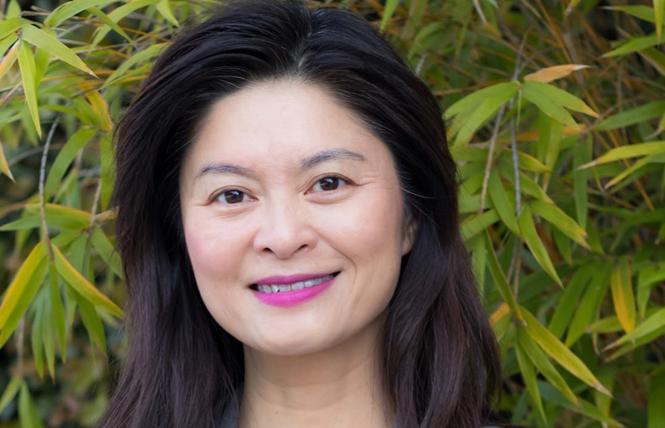 A straight candidate for the San Francisco school board has lost two prominent endorsements because of anti-trans comments she made several years ago in the Chinese press.

Josephine Zhao continues to face backlash for her comments in 2013 opposing Assembly Bill 1266, authored by gay former Assemblyman Tom Ammiano (D-San Francisco) that ensures transgender youth have the opportunity to fully participate and succeed in schools across the state. Governor Jerry Brown signed the bill later that year. It allows trans students to use bathrooms and join sports teams consistent with their gender identity.

Last week, Zhao disavowed her previous comments in an opinion column in the San Francisco Examiner. But that was apparently not enough as she lost endorsements from District 2 Supervisor Catherine Stefani and District 6 supervisor candidate Christine Johnson, according to the paper.

"Recent news stories on comments Josephine Zhao made about gender-neutral bathrooms and our transgender community are very troubling," Stefani said in a statement sent to the Bay Area Reporter. "I endorsed Josephine because of her work for families in our community and her perspective as a mother, and I appreciate that she has apologized and learned from her mistake. However, I strongly believe it is our responsibility to ensure that every child in our schools feel safe, comfortable and welcome. Therefore, I am withdrawing my endorsement of her campaign."

Johnson told the B.A.R. she decided to withdraw her endorsement.

"I was excited to support a woman of color running for office until I learned of her history with the transgender community," Johnson wrote in an email. "I am a strong supporter of all marginalized communities and I want any endorsement I give to reflect that."

There are three seats up in the November school board race. Zhao is one of 19 candidates who qualified for the ballot. There are five LGBT candidates running. [See related story.]

Zhao, who is Asian-American, previously worked for Hoover Middle School as the school/family liaison. She has sat on the San Francisco Board of Education's Parent Advisory Council and English Learner Advisory Committee.

Last week, Zhao told the B.A.R. that she was "wrong" in opposing the bill and apologized for her words. She now fully supports the law.

"I apologize for the statement I made and the hurt I brought to the trans community," she told the B.A.R. "I hope society can give me another chance and reevaluate what I have been doing, my evolution, and the progressive values I have gained."

She said that, in 2013, she was a new immigrant and it was challenging to find people to educate her about the bill.

"The fact of the matter was I opposed it and said things I shouldn't have without the full background knowledge of that," Zhao said in a phone interview Monday.

Zhao's main campaign priorities are personalized instruction to ensure all students' needs are met and all receive a high-quality education. This includes cultural and LGBT training for educators. She also wants to help students thrive in the 21st century by providing them more science, technology, engineering, and math opportunities and engage parents more in their children's education.

Wiener told the B.A.R. that having an Asian-American on the board is incredibly important, especially with the disqualification of Trustee Emily Murase, who is Japanese-American. (Murase, who had planned to run for re-election, failed to submit paperwork on time with the elections department and was disqualified.) He said Zhao was an "excellent parent organizer," particularly of Asian-American parents.

"There are times when immigrant communities can feel excluded and it's really important that parents from all communities be deeply engaged in their kids' education," Wiener said.

In response to Zhao's initial opposition to protections for trans students, Wiener said she was open to listening and learning about the community and "took other perspectives to heart."

Zhao acknowledged to the B.A.R. that she was slow to get her version of the story out and explain her new perspectives on the trans community. But, she believes her truth will be known.

"My name will be cleared and people will know I am a good person," she said.

On Monday, amid the backlash, Zhao secured an endorsement from state Assemblyman David Chiu (D-San Francisco).

At its meeting Tuesday night the Harvey Milk LGBTQ Democratic Club approved a request that it vote on rescinding its endorsement of Ma in her bid this November for state treasurer due to her endorsement of Zhao. Its members will vote on the motion at the club's meeting next month.