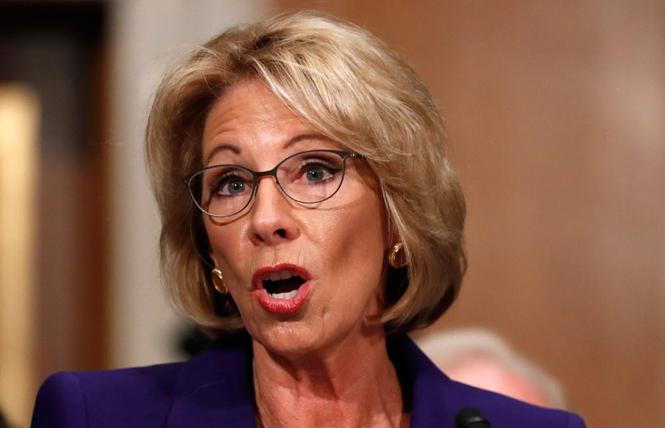 Their haranguing of the Department of Education and its secretary, Betsy DeVos, in particular, followed the publication last Saturday of an investigation by Politico that found the federal agency had refused to investigate at least five complaints of civil rights violations filed by transgender public school students who were discriminated against or harassed. The news site, using documents obtained through public records requests, determined that DeVos had ordered the department's Office for Civil Rights to dismiss the students' claims.

At a news conference Monday in the state Capitol, Assemblyman Tony Thurmond (D-Richmond) called on DeVos to do her job as education secretary and protect the rights of all students, and especially transgender youth, enrolled in the country's schools.

"We call on her to carry out the duties she was appointed to carry out," said Thurmond, who is running in November to be elected the state's next superintendent of public instruction.

Gay Assemblyman Evan Low (D-Campbell), chair of the Legislative LGBT Caucus, said the Politico report was a "very stark" example of how DeVos has abdicated her responsibilities as education secretary.

In a letter that Equality California sent to DeVos, the statewide LGBT advocacy group contended that it had "become increasingly clear" that when she uses the term "all students" it does not include transgender youth.

"Such an egregious failure to protect transgender public school students from discrimination, bullying and harassment is a dereliction of your duty to enforce federal civil rights laws, but appears to be part of a larger campaign by the administration to dehumanize transgender Americans," wrote EQCA Executive Director Rick Zbur in the letter, which was also signed by Thurmond and Low.

In response to Politico's story, the federal education agency issued a statement saying it is "committed to defending the civil rights of all students and ensuring all students have an equal opportunity to learn in an environment free from harassment and discrimination." It added that it would continue to use "current law and current regulation to determine if any child in school is being harassed or discriminated against due to race, sex, or disability."

"Many of these heroes died in silence because they were forced to conceal their sexual orientation," stated Hernandez in a news release issued earlier this year by Garcia's office.

Founder and Commander of American Veterans (AMVETS) Post 66 in Palm Springs, as well as the founder and current president of Veterans For Peace of the Inland Empire, Hernandez has pushed for the state honor for LGBT vets since 2001. Over that time he secured the endorsements of former Presidents Bill Clinton, George Bush, Barack Obama, and the late Gerald Ford.

The California Department of Veteran Affairs, led by gay Secretary Dr. Vito Imbasciani, who was a surgeon in the U.S. Army Medical Corps, also backed the proposal, as did former governors Gray Davis and Arnold Schwarzenegger. According to Garcia's office, Brown also wrote a letter in support.

"This memorial will stand as a testament to the valiant contributions of our LGBT community in the service of the United States Military," stated Garcia.
The memorial is located at Desert Memorial Park in Cathedral City.

East Bay Dems early endorse out candidates
The East Bay Stonewall Democrats, the LGBT political club for Alameda County, has early endorsed three out incumbents seeking re-election this November. Only those LGBTQ incumbents that filled out the club's candidate questionnaire were eligible to be considered for early endorsements.

Droste, one of two out council members who holds the District 8 seat, lives with her wife, Carrie, and their two young children, Simon and Cora, in the Elmwood District. Running against her are planning commissioner and attorney Mary Kay Lacey, green transportation designer Russ Tilleman, and Alfred Twu, a designer and artist who is nonbinary.

Chang, a gay man and the only LGBT person on the rent board, is one of eight people seeking five seats on the nine-person oversight body. Also running for re-election are Commissioners Paola Laverde and John T. Selawsky, its vice chair and chair respectively, while Maria Poblet, who was appointed to a vacant seat on the board this year, is seeking a full term.

Guillén is one of two out members on the Oakland council. He represents District 2, which includes Chinatown, Grand Lake, San Antonio, and Trestle Glen.

Challenging Guillén this year is Nikki Fortunato Bas, executive director of the Partnership for Working Families. The daughter of immigrants from the Philippines, she would be Oakland's first Filipina councilwoman. Also in the race is Donte Kenzie Smith, one of the black men reported to police by a white woman for having a barbecue at Lake Merritt in the spring.

The Stonewall club will vote on endorsing in other local races, including the Assembly District 15 contest between lesbian Richmond City Councilwoman Jovanka Beckles and former Obama administration staffer Buffy Wicks, at its meeting September 13. The club did not endorse either woman in the June primary, as neither they nor any of the other candidates was able to meet the 60 percent threshold required to secure its endorsement.

Web Extra: For more queer political news, be sure to check http://www.ebar.com Monday mornings for Political Notes, the notebook's online companion. This week's column broke the news that SF school board incumbent Emily Murase failed to make the November ballot.