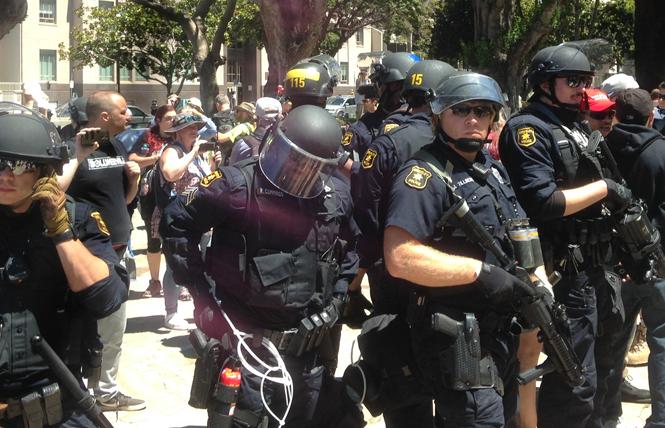 To mark the first anniversary of the martyrdom of Heather Heyer, who was killed after a fascist allegedly struck her with his car in Charlottesville, Virginia at last year's Unite the Right rally, anti-fascists around the country called for a heightened level of militant direct actions using the #AllOutAugust hashtag on Twitter and other social media against fascist events taking place in August.

In the Bay Area, actions at the start and end of the month provided stark examples of how much the situation has changed in a year - and why our tactics in countering the fascists need to change too.

Back to Berkeley
On August 5, trans woman and Donald Trump supporter Amber Cummings brought her anti-Marxism protest to Berkeley's Martin Luther King Jr. Civic Center Park, despite Joey Gibson of Patriot Prayer staying away. Given that Gibson lost both his hat and his self-respect when he tried to cross antifa lines in Berkeley last year (and ended up being taken into protective custody by Berkeley police), it's not surprising he preferred not to come back.

Even so, a coalition of local groups like Berkeley Antifa and By Any Means Necessary and area affiliates of national organizations such as Refuse Fascism Bay Area, the Freedom Socialist Party, and the Democratic Socialists of America planned a massive response, but decided to try something different. Instead of assembling where the fascists were expected to be, as has been the practice at every other counterdemonstration, organizers asked people to rally at Ohlone Park, which is about a third of a mile away, and march over.

I rode over with some comrades from the FSP and by the time we got to Ohlone Park, the signs were apparent that there were some snags in this plan. For one thing, organizers - most of whom appeared to be DSA-affiliated by their gear and flags - were congregated on the sidewalks because Berkeley police had occupied Ohlone Park and were denying them entry. For another, despite the vulnerabilities caused by a conglomeration of people on a narrow sidewalk, most of whom were hesitant to mask up given the city of Berkeley's inconsistent statements about a mask ban, nobody seemed to be watching the flanks - allowing fascists in cars and on foot to get still and video footage of protesters, presumably for doxing purposes.

With a friend, I walked over to Civic Center Park, where Refuse Fascism and BAMN had things well in hand. Refuse Fascism and Revolution Books wisely occupied the area around the fountain, where Cummings' group was supposed to rally.

Cummings ultimately managed to bring out 25 people - in sharp contrast to the several hundred fascists who attended the second and third Battles of Berkeley last year - and Refuse Fascism and BAMN had little trouble keeping them corralled until the Berkeley police directly intervened on the side of the fascists to a degree I've never seen in the last two years. First, the police barred entry to the park to anyone who wasn't part of Cummings' group. Second, officers turned a blind eye to assaults and batteries committed by those on Cummings' side, while gang-tackling an antifascist who simply swatted away a fascist streamer's camera.

I remember the latter incident well, because the police hit me from behind for no apparent reason. When I turned around and saw an officer almost frothing with rage in full riot gear, all I could say was "What the fuck, man?" His partner then started waving his arms and saying, "You're OK! You're OK!" which seemed to be more for his buddy's benefit than mine. Maybe he's a fan of the column?

Meanwhile, based on what I could determine later, around this time our comrades at Ohlone Park were making repeated efforts to pierce the police blockade of the park, though unfortunately without success. At that point, a rumor started that Cummings' group was about 10 times as large as it really was, which reportedly caused some organizers to try to convince people to return to Ohlone Park.

I don't fault the organizers for having bad information in a fluid situation, especially where cell service is spotty. When Berkeley police fired flashbangs to force our comrades back from their barricades, it looked to me that they had deployed tear gas (it's an easy mistake to make if you're not within olfactory range, as both go bang and both release white smoke), for example. However, even if the information had been correct, abandoning comrades in action against the fascists and the police is never the correct decision. Kudos are due to those members of antifa and the Black Bloc who refused to go along with the retreat plan and kept trying to enter the park.

By day's end, the overwhelming majority of those under arrest were anti-fascists, and the BPD wasted no time in providing fascist doxers with a gold mine of personal information by tweeting their mug shots and government names.

San Jose knows the way
On August 18, fascists thought they'd take advantage of the Worldcon science fiction and fantasy convention at the San Jose Convention Center to do an action "against far-left violence." Or maybe it was "against pedophilia in fandom." Or because they liked Trump. It's hard to say, as organizers set up multiple dummy event listings on Facebook for the same time and location, apparently so they could claim afterward the rally was for whatever was most convenient.

Of course, the good comrades at No Hate in San Jose had other ideas. A coalition of around 50-60 antifa, Black Bloc, crust punks, and yours truly outnumbered the initial fascist turnout by 10-1. In short order, the San Jose Police Department brought in barricades and ordered us back behind them - while allowing the fascists to wander around a few hundred feet away at the other end of San Carlos Avenue, until the police apparently got tired of us yelling about that and barricaded them in too.

While the fascists' numbers were bolstered late in the day by a band of Three Percenters, an anti-government group that loves guns and hates Muslims, according to the Southern Poverty Law Center, the conflict never quite got beyond a duel of megaphones - which the fascists lost, bigly - until the event broke up around 4 p.m.

Going forward
What happened in Berkeley and San Jose is happening across the country, as we see from reports of recent actions from Boston to Seattle, and shows how much things have changed in a year.

First, the fascists seem to have lost the ability to turn out large numbers of people at these events. Efforts by anti-fascists to expose their opposite numbers and put pressure on their employers is bearing fruit, which is causing some fascist organizers to plead with their minions not to attend mass actions, as they're likely to get named, shamed, and outnumbered by antifa.

Second, police departments around the country - with Berkeley and Portland being infamous examples - have apparently decided that since the fascists are too weak to move without massive police assistance, they will explicitly intervene on the side of the fascists while their political masters claim they are "protecting free speech."

In my view, this is a major strategic error for them, as the longer it goes on the clearer it will be to even the most hopeful liberal behind rose-colored glasses that the police are the foot soldiers of the regime who prefer the company of racists and bigots to those who oppose them. As a police abolitionist, I'm fine with this, but I suspect those who whack me in the back and shoot protesters in Portland in the head with "non-lethal" munitions have a different view.

On a tactical, short-term level, though, heightened levels of police involvement mean anti-fascist tactics need to change. While it will always be necessary for a main body to contest ground - specifically, ground where the fascists are at or are going to, rather than ground where they aren't, like Ohlone Park - there needs to be a greater use of small mobile groups as well to confront the fascists where they and their police collaborators don't expect the battle to happen.

Of course, for that to happen, people need to keep organizing - and keep showing up.