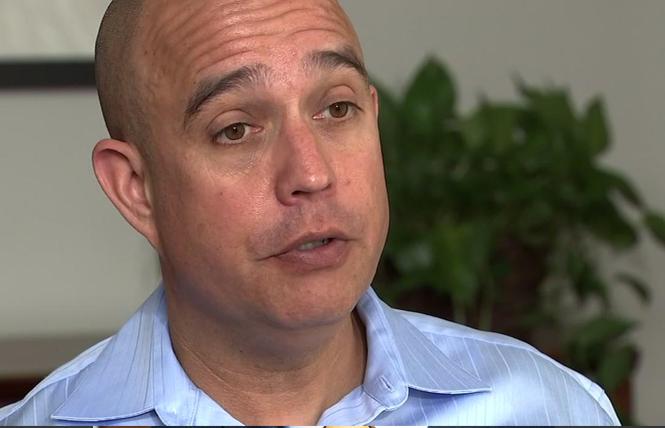 With that, Montoya said that his number one priority is the union membership.

"It's not about me, it's about the members and making sure I do my job and continue to represent their voices on the many issues we face," said Montoya, who is also a member of the Latino community.

Tension and the city's lack of respect is reportedly why the union's former president, Martin Halloran, stepped down, according to what Gary Delagnes, a former association president, told the San Francisco Chronicle. Montoya said Halloran didn't step down because of any particular reason or person and that it was simply the right time.

Montoya, 50, has a long history with the association, formerly serving as vice president and sat on its executive board for 18 years. He was also a police officer stationed in the Mission district where he led the undercover unit for six years.

When the Bay Area Reporter spoke with Montoya over the phone he said it had been a "crazy first week" and he was getting settled. Although just getting started, Montoya had a lot to say about use-of-force, Tasers, and said he brings an open mind to the association and hopes to foster a more positive and respectful relationship among the city and the more than 2,000-member union.

"Some people say relationships are fractured, and, yes, we are going to be separate on many issues," Montoya said of various city departments. "But I have an open-door policy and want to focus more on our commonalities and how we can bridge gaps than our differences."

He did say, however, if any of his members are "vilified" he will respond.

Talking about Proposition H, the ballot measure sponsored by the association that would allow police officers to carry Tasers, he said he is optimistic it will pass despite the Police Commission passing a policy that already allows the use of Tasers by the SFPD. Getting Tasers in the hands of officers has been an almost 15-year battle, Montoya said. (Prop H would require any changes to the policy to go before voters, rather than the Police Commission.)

"We weren't really gaining ground, so we thought the best way to do it was get the voters to do it," he said. "It's more than a coincidence that once the measure qualified for the ballot, the commission, for the first time, came together to adopt a policy and fast track it."

Police Chief William Scott opposes Prop H, but he may not be in San Francisco much longer because he is one of the finalists for the top job at the Los Angeles Police Department, where he worked before being hired to run SFPD.

In mentioning the district attorney's recent decision not to file charges against the police officers involved in the fatal shootings of Mario Woods and Luis Góngora Pat, Montoya said if officers had had Tasers during those incidents, the outcome may have been different.

He also said the more than 200 reforms being implemented from the recommendation of the United States Department of Justice after the fatal shootings is going well and that the safety of his members is a top priority while also balancing the safety of the public.

When asked about being the first LGBT to head the union, he said he tries his best to keep his personal life separate from his professional life, although he doesn't hide who he is.
"I don't think my members really care," he said. "It's irrelevant what my nationality is, where I live, my sexuality, or if I have hair or don't have hair."

In the next few weeks Montoya plans to meet with Mayor Mark Farrell, the Board of Supervisors, and the Police Commission. The oversight panel, however, currently has only three sitting members, not enough to convene, after the Board of Supervisors rejected Farrell's request to reappoint Commissioners Joe Marshall and Sonia Melara. The board's Rules Committee forwarded the names of attorney John Hamasaki and former Deputy Public Defender Cindy Elias to the full board for possible approval at its June 5 meeting. [See item in News Briefs.]

To LGBTs in the community, like Petra DeJesus, the lone lesbian and LGBT remaining on the Police Commission, Montoya becoming president was good news.

"It is refreshing to hear that the San Francisco Police Officers Association appointed Tony Montoya, a longtime POA member and an LGBTQ representative to the presidency of their association, DeJesus wrote in an email. "It is a significant milestone to have a Latino and LGBTQ representative at the helm of the union leadership."

She continued, "I anticipate that Tony Montoya is prepared to work with the commission in a sincere good faith effort to implement real reform within the Department." while she also mentioned the unfortunate timing of his presidency, pointing to Prop H and how it undermines the commission's oversight authority.

"I look forward to connecting with him," gay District 8 Supervisor Jeff Sheehy said. "This is a major step that he is in this position. I see it as being a signaling to everyone else, especially at a time when the force is growing, that LGBTs are welcome. That is a great signal to be sending out when expanding the force."