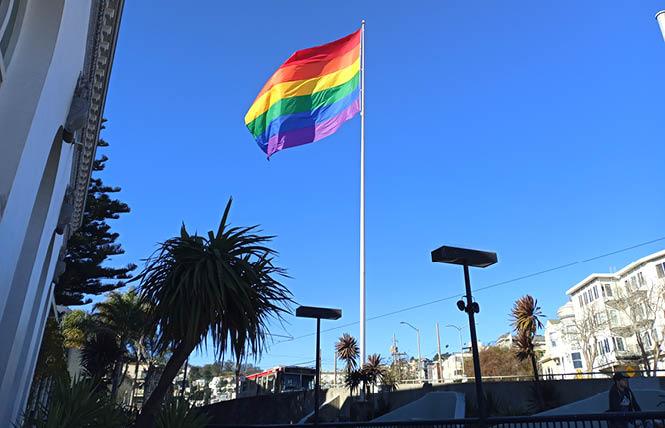 A recent Gallup poll has found that the number of Americans who self-identify as LGBT is now at 7.1%, an increase over the 5.6% figure two years ago. Photo: Scott Wazlowski

The Gallup poll released last month suggests that the numbers of Americans who self-identify as at least one of the letters in the LGBT acronym now stands at 7.1%, an increase from 5.6% only two years ago. Notably, the figures that formulate that statistic vary dramatically from one generation to the next.

"Since Gallup began measuring LGBT identification in 2012," the survey organization stated in a February 17 news release, "the percentage of traditionalists, baby boomers, and Generation X adults who identify as LGBT has held relatively steady. At the same time, there has been a modest uptick among millennials, from 5.8% in 2012 (when some members of the generation had not yet turned 18) to 7.8% in 2017 and 10.5% currently."

And those four years have made all the difference. Nearly 21% — 20.8% to be precise — of Gen Z adults self-identify as LGBTQ.

The 10% myth
Forty years ago, when people would speculate on the number of folks who might fall under today's umbrella term of LGBTQ — nomenclature that wasn't available in the 1970s and 1980s — the most popular figure was 10%. In other words, it was believed by many that 10% of the people in the United States were gay or lesbian. Bisexual was still, in popular parlance, a sort of nebulous category believed by many to be merely a stepping stone on the path to full acceptance of one's self as lesbian or gay. And lesbians had had to wage quite a battle just to get themselves recognized in the names of organizations like the National Gay Task Force, now called the National LGBTQ Task Force.

That 10% figure could be traced back to one man in particular, biologist and researcher Bruce Voeller, a co-founder of NGTF. He served as its director until 1978 (he died from an AIDS-related illness in 1994). At the time, there really weren't any hard-and-fast figures identifying what percentage of the population was having sex with each other, or in what combinations.

Voeller, in his capacity as director of NGTF, needed a figure that identified gay Americans as a quantifiable community in the American populace. For that, he turned to the research of often-notorious sex researcher, Alfred Kinsey, author of both 1948's "Sexual Behavior in the Human Male" and 1953's "Sexual Behavior in the Human Female." In both studies, Kinsey had formulated scales of sexual behavior, noting that many people, both male and female, engaged in same-sex sexual behavior to different degrees at various points in their lives. What Voeller latched onto was the figure that 13% of men had engaged in primarily homosexual behavior for at least three years of their lives, while for women, that figure stood at 7%. Voeller averaged it out and, voila! — 10% of Americans were identifiable as gay.

One problem with that figure, of course, was that — Kinsey's work aside — there really weren't any figures, or surveys, and certainly no census numbers, to support or challenge that estimate. And, at the federal level, that didn't really begin to change until 1990. That was when the United States Census Bureau asked unmarried partners to identify themselves in the decennial census. Counts of same-sex couples were tabulated by combining responses to that question and to the gender question on the from. Only 145,130 same-sex people did and, as flawed as those figures may have been — not everyone felt comfortable identifying themselves for the government, for example — it was a huge leap. Unfortunately, a follow-up in the 2000 census was even more flawed but that count did see a notable increase in the numbers to 601,209 unmarried same-sex households. Gallup didn't even begin surveying LGBTQ numbers until 2012.

Even now, LGBTQ Americans really don't show up in the census unless they're being asked about their relationship status and at that, those figures don't include people who don't live together. That, too, has begun to change, but in a surprising format.

Back in April 2021, the census bureau announced it was launching a new, experimental survey, the Household Pulse Survey, in an attempt to gauge how Americans were faring during the COVID-19 pandemic. A reasonably brief, 20-minute questionnaire sent out via email, and to which response is entirely voluntary, the Pulse seeks all sorts of information including, surprisingly, sexual orientation.

Conducted in phases, Phase 3.2 began showing up in people's inboxes in July 2021. Unlike previous surveys, it asked very specific questions about sexual orientation and gender identity:

"What sex were you assigned at birth on your original birth certificate?
Choice of answers: Male or Female."

"Do you currently describe yourself as male, female or transgender?
Choice of answers: Male, Female, Transgender or None of these."

"Which of the following best represents how you think of yourself?
Choice of answers: Gay or lesbian; Straight, that is not gay or lesbian; Bisexual; Something else; I don't know."

Besides making history, the survey also discovered that LGBT households were far more likely to experience food and economic insecurity than their non-LGBT counterparts. And it's that very finding that illustrates how important knowing just how many of us there are.

"It's the first data we have from the federal government on LGBT data," said Jody Herman, Reid Rasmussen Senior Scholar of Public Policy at the Williams Institute, an LGBTQ think tank at UCLA School of Law, in a phone interview. For researchers and data scientists, attempts to study LGBTQ issues have long been hampered by the very lack of reliable data on the LGBTQ population of the country. Federal surveys have been important to researchers, Herman said, but they don't ask questions relevant to LGBTQ respondents. Notably, too, studies are often driven by available data, she added.

One California institution, on the other hand, has been asking such questions in the California Health Interview Survey, an ongoing effort interviewing 20,000 Californians each year about several dozen topics from internet use and difficulty finding health insurance to mental health care and asthma. The CHIS is conducted by the Center for Health Policy Research at UCLA, in collaboration with the California Department of Public Health and the Department of Health Care Services. One such study titled "Gaps in Health Care Access and Health Insurance Among LGBT Populations in California" found that LGBTQ Californians generally had better access to health insurance but "were more likely than straight men and women to report experiencing unfair treatment when getting medical care."

This sort of information is only possible when LGBTQ folks are identified. As Harvey Milk famously implored, "Every gay person must come out."

It's only when we do so that the community's needs will be identified and understood.


LGBTQ Agenda is an online column that appears weekly. Got a tip on queer news? Contact Eric Burkett at e.burkett@ebar.com